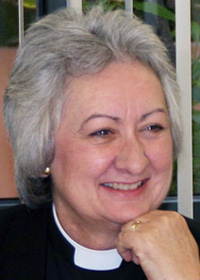 The Rev. Gwynne Marlyn Guibord, founder and president emerita of The Guibord Center – Religion Inside Out, died the morning of Aug. 15. She was 75.

Guibord had struggled with cancer for 10 years, and upon learning in June that the cancer had metastasized into vital organs, she chose to stop further treatment.

Survivors include her wife, Lois M. Sprague, a doctor of psychotherapy, who recently succeeded her as Guibord Center president.

Gwynne Guibord was born June 27, 1944 in Flint, Michigan. She became a licensed psychotherapist, and earned a master’s degree in divinity at Claremont School of Theology, which in 2010 presented her with its Distinguished Alumna Award.

She founded her eponymous center after some two decades of interfaith work, both before and after her ordination to the priesthood in 2005. The Guibord Center, which has no formal connection with any specific church or faith community, has fostered relationships among the Christian, Jewish, Buddhist, Hindu, Muslim and Sikh communities of Los Angeles. It holds frequent events to foster understanding among the area’s diverse religious communities. It also has worked to counter violence against women, producing a public service announcement titled “Saving Grace” and featuring men of many faiths asserting their traditions’ respect for women.

Guibord was officer for ecumenical and interreligious concerns for the Diocese of Los Angeles from 2003 to 2009. She also served for several years as consultant for inter religious relations for The Episcopal Church. She was president of the Interreligious Council of Southern California, the California Council of Churches; the National Board of The Interfaith Alliance and Progressive Christians Uniting.

“The success of interreligious bridge-building is born out of forming relationships that nurture and foster trust and mutual respect,” Guibord wrote. “The language of such relationships is the language of the heart rooted in a profound and faithful embrace of one’s own beliefs that are deepened in valuing the Holy in another’s faith and practice.”

Guibord also was at various times vice chair of the National Muslim-Christian Initiative Dialogue on behalf of the National Council of Churches in Christ (NCCC); Episcopal Church representative of the NCCC’s Christian – Jewish dialogue; and co-founder and co-convener (with Jihad Turk) of the Christian-Muslim Consultative Group of Southern California.

She received many honors, including The Muslim Peace Award from the Islamic Center of Southern California; The Mahatma Gandhi Award for the Advancement of Religious Pluralism from the Hindu American Foundation; and the Interfaith Unity Award from the South Coast Interfaith Council.