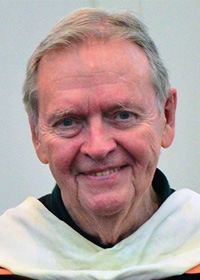 Bloy House will host a memorial service for Sanders via Zoom on Saturday, Oct. 31 at 11 a.m. Email the Bloy House office at bloyhouse@cst.edu to be sent the Zoom link and program bulletin.

Born in Memphis, Tennessee on Nov. 28, 1927, Sanders became a leading light in Biblical studies with a brilliant career of research, which included pioneering work with the Dead Sea Scrolls; and as a seminary professor, which ranged from Colgate Rochester Divinity school beginning in 1954 to Union Theological Seminary, starting in 1965, and Claremont School of Theology and Claremont Graduate School beginning in 1977. He held leadership roles in a comprehensive set of professional associations, including the Society of Biblical Literature, the American Academy of Religion, the Hebrew Bible Seminar of Columbia University, The Albright Institute of Archaeological research in Jerusalem, and was founding Director of the Ancient Biblical Manuscript Center for Research and Preservation in Claremont, California.

He published widely in leading critical biblical journals and wrote a number of books, most recently a collection of his essays in the two-volume work, Scripture in Its Historical Contexts, published in Germany by Mohr Siebrek Ek (2019). His work focused on Old Testament literature. He was a leading voice in canonical criticism and the monotheizing process, which aimed to affirm the progressive growth in the interpretation of the biblical tradition based on the core belief in the one God of all peoples.

Professor Sanders’ influence in biblical criticism was global in reach. His mastery of biblical Hebrew and his early work with the Qumran (Dead Sea) Scrolls supported his participation in the preparation of the fourth edition of the Biblia Hebraica series started by Rudolf Kittel (1909), published by the Deutsche Bibelgesellschaft (German Bible Society) in Stuttgart, started in 1968 and completed in 1977.

His autobiographical book, Re-birth of a Born-Again Christian (2017) details his life’s journey from his early roots in evangelical Christianity through his own growth in biblical awareness during which he became deeply concerned about the biblical tradition being politicized and removed from any kind of interpretation of the Bible itself.

Professor Sanders worked to the end as an avid scholar and as associate editor and peer reviewer for Biblical Theology Bulletin: A Journal of Bible and Theology, keeping pace with his life-long dedication to ongoing developments in the interpretation of the Biblical canon.