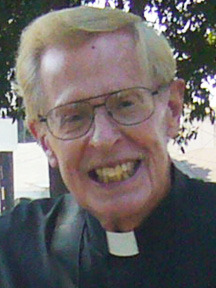 The Rev. James Furnas Bogardus, Jr., who was for many years an assistant priest at St. Andrew’s Church, Torrance, died on Aug. 26. He was 85.

The Rev. Stephen Williams will preside at a memorial service at 11 a.m. on Tuesday, Sept. 13 at St. Gregory’s Church in Long Beach, where Bogardus was a member for the past year. His survivors include a nephew and many friends.

A “worker priest,” Bogardus was for many years employed by American Airlines, and tended to serve at churches wherever his secular work took him; from Seattle to the Southland to New Jersey. After his retirement from the airline, he was a coordinator and secretary for an organization of American Airlines retirees. He retired — by all accounts, most reluctantly — from his ministry at St. Andrew’s at the age of 83 due to failing health.

James Bogardus, known as “Kimo” to his friends and parishioners, was born in Plymouth, Mass., on Oct. 6, 1925. He had connections with the royal family of Romania, and spent his childhood in that country. He had to leave Romania toward the end of World War II when the Soviet Union occupied the country. During a brief residence in Italy, his young wife died in childbirth, as did their infant.

He returned to the United States, where he earned a bachelor of science degree at the University of Pennsylvania at Philadelphia (1949). A decade later, while working for American Airlines, he attended Church Divinity School of the Pacific, earning a bachelor of divinity degree in 1959. He was ordained a deacon in June 1959, and a priest a year later.