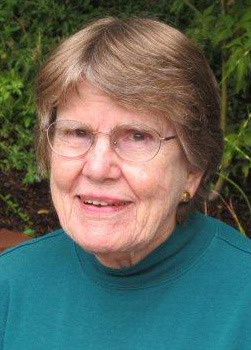 The Rev. Jane Carver Turner, former assistant priest at St. John’s Church (now the ProCathedral) and St. Alban’s Church in Los Angeles, died on June 10 at her home in Eugene, Oregon. She was 90.

She was preceded in death by her husband Robert Turner. Survivors include sons Robert (Norma) of Culver City, James (Sandi) of Sunland, Mark (Ken) of Eugene, and daughter Susan of Calabasas. She has four grandchildren.

Burial will take place at a private service in Santa Monica. Memorial donations may be made to Doctors Without Borders, Bread for the World, Habitat for Humanity, or the outreach commission of the Episcopal Church of the Resurrection in Eugene.

Jane Carver was born in Los Angeles in 1924. Her parents, recent British immigrants, took her to St. John’s, Los Angeles, where she was baptized by the Rev. George Davidson on the Saturday before the dedication of their beautiful new Romanesque church.

She grew up in the Altadena/Pasadena area, attended Pasadena Junior College (now Pasadena City College) and then UCLA. Her education was interrupted by World War II. She followed her older brother into the Navy and served in the Hospital Corps as an electroencephalograph technician, sparking an interest in physical therapy. She returned to finish her bachelor’s degree at UCLA and also to graduate from the Children’s Hospital School of Physical Therapy, which was affiliated with the university at the time.

By then she had married Robert Turner, a professor of music at UCLA and concert pianist. With their first child on the way, Jane Turner abandoned physical therapy to devote herself full time to homemaking, which included a considerable amount of time doing volunteer work in the community. Robert Turner also gave up concertizing to teach piano in their home. They moved to Santa Monica in 1960. Until Robert’s death in 2001 the house was filled with young people and piano and chamber music.

The family attended St. Alban’s, Westwood, and it was there that Jane Turner heard the Rev. Oliver Garver (later bishop suffragan of the Diocese of Los Angeles) give a series of talks on the Hebrew prophets. She also attended a class taught by a member of the congregation who spoke of his experiences with the Catholic Worker Movement in Los Angeles and invited class members to assist the Workers at their hospitality kitchen on Skid Row. The result was that Jane was strongly attracted to the Social Justice “arm” of the Episcopal Church.

Turner became interested in studying theology and read all of the available books in the parish library. When seminaries began to accept women as students in the 1970s, Jane signed up for weekend classes at Bloy House (The Episcopal Theological School at Claremont.) She was not seeking ordination at that time — she just wanted to enjoy the classes, which indeed she did. One by one, she said, each of her four children visited Bloy House “to see what turned Mom on!”

It was not until the beginning of her fourth year at Bloy House that Turner decided she was, indeed, called to seek ordination. She completed her degree at Church Divinity School of the Pacific in Berkeley. Robert took a sabbatical from teaching to accompany her there and in the course of the year was invited to give a piano recital for the entire student body.

Turner was ordained a deacon in 1982 by Bishop Rusack and a priest on May 8, 1983 by Bishop George Barrett. She served as assistant to the rector at St. Alban’s for six years. During that time Bishop Garver invited her to chair the diocesan Peace and Justice Commission, which she did, inviting Marty Coleman of All Saints Church, Pasadena, to be co-chair. In 1988 she returned to St. John’s, Los Angeles, where she had been baptized 63 years earlier. She assisted the Rev. Warner R. Traynham there until her retirement in 1995, returning occasionally afterward to help with the Hispanic congregation.

“[I] was always grateful for [my] years with the racially and culturally mixed congregation at St. John’s,” Turner wrote in an autobiographical sketch. “Those years saw the parish’s outspoken opposition to the development of nuclear weapons, and to the Gulf War. They included interfaith services with Muslims and Jews. They included the uncontrolled AIDS epidemic, the passion and horror of the Los Angeles riots, which raged within blocks of the church itself and in the neighborhoods where many of its parishioners lived and worked. They were difficult years but also energizing. St. John’s seemed an appropriate place in which to be trying to live out the Gospel, which, it has been said, is difficult to do when you are too comfortable.”

Early in 2007 Turner moved to Eugene, Oregon, and lived next door to her son Mark and his partner. She attended the nearby Episcopal Church of the Resurrection.