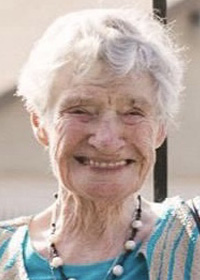 Canon Jenny Ladefoged – a longtime lay leader in the Diocese of Los Angeles and the wider Episcopal Church – died March 13 of complications from open heart surgery at Vanderbilt University Medical Center. She was 89 and in recent years resided in Nashville, Tenn.

Ladefoged is predeceased by her husband, Peter, an internationally renowned linguist, who died in 2006. She is survived by their daughters, Lise Friedman and Katie Ladefoged; son, Thegn Ladefoged; and five grandchildren.

Funeral services will be livestreamed Tuesday, March 16 at 1 p.m. (PDT) on the Facebook page and YouTube channel for St. Ann’s Episcopal Church, Nashville. A reception will be held on Zoom.

Canon Ladefoged is well known in the diocesan community, which she served as a deputy to General Convention in 1997 and 2000; member of the Standing Committee, Diocesan Council, and the Commission on Ministry; president of the diocesan Episcopal Church Women and a member of its churchwide board; member and administrator of the 1999 bishop diocesan search committee, and chair of the 1991 bishop suffragan search committee, among other volunteer roles.

In 1993 Bishop Frederick H. Borsch named Ladefoged a canon of the Cathedral Center of St. Paul, one in the first group of clergy and lay leaders he so recognized.

Ladefoged was a past senior and junior warden of St. Michael and All Angels Church in Studio City, where she was a parishioner for many years.

The daughter of an Anglican priest who served Church of England congregations in Cornwall, Jenny Macdonald wed Peter Ladefoged in 1953. Both attended the University of Edinburgh and went on to live and work in Nigeria before arriving in Los Angeles where in 1962 Peter began teaching at UCLA, which described him as “the world’s foremost scholar of phonetics” who documented the speech and sounds of more than 50 of the world’s endangered languages.

Among her many ministries in the Diocese of Los Angeles, Ladefoged was a frequent contributor to The Episcopal News. “How lucky we are to belong to a diocese,” she wrote in 1986 column on the United Thank Offering. “I think it is not only the pride in realizing we cover such a large geographical area, it is also the diversity of our diocese. Our tiny missions, our huge parishes, our different languages, all coming together to give to other people.”

Ladefoged once observed that “General Convention does not ensure salvation, but it can be a beacon lighting the way.” She later added, “The Church must not neglect the people in the pew. This means allowing Episcopalians to be heard with respect. Our unity, despite our differences, is very important to me.”