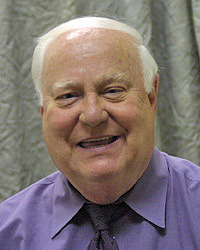 Canon Jack Plimpton, longtime executive director of diocesan HIV/AIDS ministries, died on Friday, Feb. 12, in Los Angeles after entering hospice care. He was 85 and had been suffering from congestive heart failure.

Requiem Eucharist is set for 11 a.m. on Thursday, March 17, at the Cathedral Center, 840 Echo Park Avenue, Los Angeles. The Rev. Canon Anne Tumilty, rector of St. James’ Church, South Pasadena, where Jack was a parishioner, will be celebrant and Bishop J. Jon Bruno will preach. Interment of ashes in the Cathedral Center columbarium will be followed by a lunch reception in the spirit of the Feast of St. Patrick and Plimpton’s own Irish-American heritage.

Survivors include Plimpton’s sister, Jean Burger, of Washington state; his nieces, Carrie VanderLinden and Laurie Vanderboom; three nephews, Michael, Jeffrey and Todd Maehl, and their families. He also is survived by many friends.

During Plimpton’s more than 25 years of active diocesan ministry, he founded Project New Hope affordable housing complexes for individuals and families living with HIV/AIDS. He began his diocesan work as executive director of the Bishop’s Commission on AIDS Ministries by appointment of Bishop Frederick H. Borsch after a 1988 grant made funding available for this outreach that had begun in 1986 during the tenure of Bishop Suffragan Oliver B. Garver, Jr. Plimpton’s appointment came shortly after the death of his life partner, the Rev. Robert Kettlehack, who was at the time said to be the first Episcopal priest of the diocese to live openly with his HIV/AIDS diagnosis. In recognition of Plimpton’s longstanding and dedicated service, Bishop Bruno named him to the diocesan Order of Angels in 2007.

Plimpton brought to his diocesan post some 20 years experience as an assistant superintendent, administrator and educator in the Los Angeles Unified School District, serving mainly in the Division of Adult and Career Education, within which he was principal of North Hollywood Community Adult School. Among other achievements was his work in founding the Los Angeles Performing Arts Academy, a project in which he enlisted advice and support of close friend and late actress Jean Stapleton.

The family has requested that, in lieu of flowers, memorial contributions be made to Project New Hope, 1004 Echo Park Ave, Los Angeles, CA 90026.