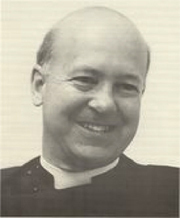 Retired Bishop of Ohio and former rector of All Saints Church, Pasadena, John H. Burt died October 20 at his home on the southern shore of Lake Superior in the Upper Peninsula of Michigan. He was 91 years old.

In a career spanning five decades, Burt dedicated himself to social reform, racial and gender justice and ways in which the world’s churches could work together to effect positive social and political changes. Believing that “the world alters as we walk in it,” he stood out as a leader in seeking ways in which the church could respond to the complex challenges of the 20th century.

Burt served as a chaplain in the United States Navy during World War II in the Pacific theater. After the war, he became the Episcopal chaplain of the University of Michigan at Ann Arbor, followed by a seven-year tenure at St. John’s Episcopal Church in Youngstown, Ohio, where he received the Arvona Lynch Human Relations Award and became the founding president of the ACLU, playing a leadership role in the racial integration of community housing and swimming pools.

Burt became the rector of All Saints Episcopal Church in Pasadena, California, in 1957 and transformed that church into one of the largest and most active voices for social change in the country. As an advocate for social justice in the 1960s, Burt’s name was linked with both local and national social and political activity. As president of the Pasadena Community Planning Council, he coordinated the work of welfare and other civic organizations. In 1963 he was a co-sponsor of the “Rally for Freedom,” Los Angeles’s largest civil rights rally until that date, at which Dr. Martin Luther King spoke to 35,000 supporters of freedom fighters in the South. The night before, Burt convened a “Town Meeting for Democracy” with Dr. King at the Shrine Auditorium in Los Angeles, which was attended by both Democratic and Republican Senators as well as Hollywood celebrities, a bomb threat was called in to his home, and the LAPD bomb squad was summoned.

Burt was elected bishop of Ohio in 1967 and served until his retirement in 1984. During his tenure, he was a vocal opponent of the war in Vietnam, speaking at rallies in Cleveland and Kent State. He gained national attention when the Presiding Bishop named him to be a delegate on an interfaith global tour which took him to South Vietnam and culminated in an International Inter-Religious Symposium of Peace in New Delhi. The symposium was the first in history to gather around a single conference table leaders of the Hindu, Moslem, Shinto, Taoist, Buddhist, Christian and Jewish traditions.

In 1978, as the collapse of the steel industry devastated Youngstown, Burt co-founded the Ecumenical Coalition of the Mahoning Valley. The coalition fought to keep Youngstown Sheet and Tube from reneging on agreements with labor and to seek ways to reopen the mills, including allowing the workers to buy the mills — an unprecedented move at the time. Although the coalition was ultimately unsuccessful, for his efforts he received the prestigious Thomas Merton award, given by the Thomas Merton Center for Peace and Social Justice to “national and international individuals struggling for justice.” (Other recipients have included Dorothy Day, Joan Baez and Daniel Berrigan.)

He was one of the first to advocate for the ordination of women to the priesthood, declaring he would resign as bishop if the Episcopal General Convention failed to approve women priests in 1976. He ordained eight women as priests during his years as bishop of Ohio.

Bishop Burt was also deeply committed to Christian-Jewish relations, and, upon retirement, became president of the National Christian Leadership Conference for Israel from 1992 through 1998. He was consistently one of the strongest voices within the Episcopal Church advocating for better relations with the Jewish people and the State of Israel throughout his 50 years of ministry. He served for six years as head of Christian-Jewish Relations for the Episcopal Church at the national level and also served on commissions of both the National and the World Council of Churches dealing with Christian-Jewish relations. He was a founding member of the church relations council of the United States Holocaust Memorial Museum.

An ardent ecumenist, Bishop Burt served as president of the Southern California Council of Churches and later as a representative to the National Council of Churches. From 1974 to 1979, he chaired the Episcopal Church’s Standing Commission on Ecumenical Relations, affirming that “the movement toward a church community along denominations throughout the world is a matter of life or death.” In addition, he chaired the Episcopal Clergy Deployment Office from 1967-1973 and the House of Bishops committee on theology from 1973-1980.

Among the special honors Bishop Burt received are Cleveland’s Simon Bolivar Award, the Jewish War Veterans Award, the Pasadena Community Relations Award and the Ohio Civil Liberties Award. In addition, he received four honorary doctorates (from Amherst College, Kenyon College, Youngstown State College and the Virginia Theological Seminary). He served on the Board of Directors of United Way Los Angeles, the Cleveland Urban Coalition, and Americans for Energy Independence, and was on the governing board of the National Council of Churches. After retirement, he continued to serve as the national chairman of the Urban Bishops Coalition for many years and chaired the fledgling Great Lakes/Appalachian Project which dealt with economic problems and their ethical implications in Ohio and seven other nearby states. He was also co-author of World Religions and World Peace.

Burt is survived by his wife, Martha; four daughters — Susan Burt of Marlinton, West Virginia, Emily Betinis of Amherst Junction, Wisconsin, Sarah Burt of Antrim, New Hampshire, and Mary Laird of New York City; six grandchildren and five great-grandchildren. He is predeceased by his sister Deborah and his brother Alfred, composer of many well-known Christmas carols, including “Caroling, Caroling” and “Some Children See Him.”