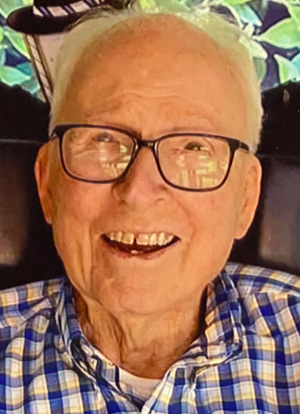 Survivors include his wife, Catherine Jo Henley-Erickson, a retired professor of English at the University of La Verne, to whom he was married June 13, 1970; his daughters Jennifer Erickson Cornish (Rick Cornish), Elizabeth Erickson Koehler (Paul Koehler), and Margaret Erickson (Doug Erickson) from a previous marriage; a stepdaughter, Suzanne LaFetra Collier (David Collier) and stepson, Michael LaFetra; 17 grandchildren and 12 great-grandchildren (with two more expected this year). He also is survived by several nieces and nephews and a cousin in Sweden, Thomas Eriksson, and his family. Erickson’s son, John, died in 2009. His two sisters, Nancy Murphy and Carolyn Sutcliffe, both died in 2022.

Erickson, who earned a doctorate in psychology from the School of Theology at Claremont/Claremont Graduate University in 1965, was for many years a clinical psychologist in private practice in Claremont, working with families, children, and educators. He deeply enjoyed this work, according to his wife; he began his practice in about 1965 and finally retired in 2010 at the age of 86. He also was a pastoral counselor at St. Martha’s Parish and School, West Covina (now closed), from 1964 to 1971, and a chaplain at Good Samaritan Hospital (1963 – 64). At the beginning of his ordained ministry, he was a curate at All Saints, Pasadena (1951 – 1953).

He was born April 30, 1924, in Cambridge, Massachusetts, to Joseph Austin Erickson, Sr., a banker and son of Swedish immigrants, and Esther Reese Stevens Erickson. He graduated with a bachelor’s degree from Harvard University in 1946 and became a stockbroker. He moved to California and soon discerned a calling to the priesthood. (Cathy Henley-Erickson says that his family did not look with favor on this change in careers; his father, she said, was horrified. Eventually, she added, they came around.) Erickson returned to the East Coast to attend the Episcopal Theological School in Cambridge (now Episcopal Divinity School at Union in New York) in 1951. Bishop Suffragan R.A. Heron of Massachusetts ordained him to the diaconate January 6 of that year. Erickson and his family soon relocated to California, where he was ordained to the priesthood on July 15, 1951, by Bishop Suffragan Donald Campbell of the Diocese of Los Angeles.

In addition to his work as a psychologist and a priest, Erickson was a licensed pilot who flew all over the country in rented small planes and was a flight instructor at two local airports; Brackett Field in La Verne and Cable Airport in Upland. According to his wife, he was “a great pilot, but a lousy flight attendant.” He was so focused on his flying, she said, that he refused to land for restroom breaks or any other needs until he reached his destination.