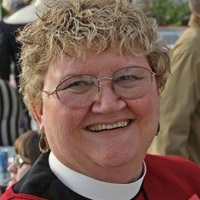 The Rev. Karen Ann Wojahn, assisting priest and educator at several Orange County congregations, died Sept. 30, the day after her 70th birthday, at her home in Orange, Calif. In recent months she had been hospitalized with a worsening pulmonary condition.

She is survived by her husband of more than 50 years, Roy Wojahn; their daughters Trudy Franzen (Gary) and Beth Wojahn (Curtis Price); their son, Nathan Wojahn; six grandchildren; her sister, Susan Dix, and two brothers, Jim and Don Dix. Requiem Eucharist will be at 2 p.m. on Saturday, November 18, at St. Paul’s Church, 1221 Wass Street, Tustin.

Wojahn assisted most recently at St. Paul’s after serving from 2005 to 2008 as an assisting priest at St. John Chrysostom, Rancho Santa Margarita. Previously, from 2000 to 2004 she was director of children’s and family ministries at St. Wilfrid of York Church in Huntington Beach. She completed her ministry study year at St. Thomas of Canterbury Church, Long Beach.

From 1989 through the 1990s she was a staff writer for The Episcopal News and contributed articles to the diocesan history project in recent years. With Roy Rogers Jr. she co-authored the 1986 book Growing Up with Roy and Dale. She also was a chaplain to the Southern California chapter of Society of the Companions of the Holy Cross.

Sponsored by her home parish of Trinity in Orange, Wojahn was ordained to the priesthood in 2001 by Bishop Frederick H. Borsch. She held degrees, with honors, from Bloy House, the Episcopal Theological School at Claremont; Cal Poly Pomona; and Fullerton College. She was a native of Fargo, North Dakota, and moved at an early age with her family to Southern California.