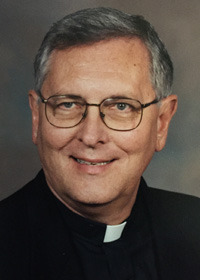 The Rev. Lawrence J. Steele, deacon of the Diocese of Los Angeles, died on July 19 in hospice care. He was 75.

He most recently assisted at St. Stephen’s Church, Beaumont, and previously at St. Agnes’ Church, Banning. He was a police chaplain in Beumont, a volunteer prison chaplain, and and also served at the San Gorgonio Hospital in Banning.

Survivors include Steele’s husband, Danny Berroteran, to whom he was married on Aug. 31, 2013; his daughter, Amanda Sondal of West Hills, Calif.; and three grandchildren. His son, Andrew, predeceased him.

A memorial service will be held at 10 a.m. on Saturday, August 8 at Trinity Episcopal Church, 419 S Fourth Street, Redlands 92373.

Steele was born Dec. 27, 1939 in Kansas City, Kansas. He earned his bachelor and master’s degrees at the University of Southern California and worked for many years as a high school counselor. He attended Bloy House (The Episcopal Theological School at Claremont), graduating in 1998, and was ordained to the diaconate on Oct. 30, 1999 by Bishop Suffragan Chester Talton.

His family has requested that any memorial gifts be made to the Children’s Miracle Network, or to Carol’s Kitchen, a food project for the homeless in Riverside County.