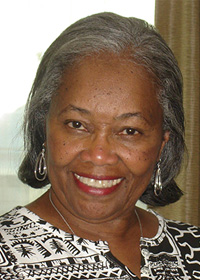 She died, coincidentally, on the National Day of Remembrance for Murder Victims. Dolores spent much of the last dozen or so years as a co-organizer of the Parents of Murdered Children chapter in the Inland Empire. She led support groups for families of murdered children and spoke to incarcerated youth and others about the 2001 murder of her disabled son and only child, Timothy Gaines.

Survivors include her husband Clinton Conyer; her mother Cora Gaines; her brother Kahlex Kahlex; her aunt Edith Brimm; her husband’s seven children, his nine grandchildren and seven great-grandchildren; and many cousins, nieces and nephews.

Funeral arrangements are pending, and will be announced as soon as they are finalized.

Conyer’s long service to the Episcopal Church in the Diocese of Los Angeles also included membership on the search committee for the bishops suffragan that resulted in the elections of Diane Jardine Bruce and Mary Glasspool. She also served on the Commission on Ministry for many years and worked closely with former Bishop Suffragan Chester Talton on the diaconal program for the diocese. Conyer was a board member and treasurer of the H. Belfield Hannibal Chapter of the Union of Black Episcopalians, and a longtime board member of the diocesan Episcopal Church Women, which named her an “Honored Woman” at the ECW Triennial, meeting concurrently with General Convention in 2009. Bishop J. Jon Bruno named her an honorary canon of the Cathedral Center in 2007.

Marie Dolores Gaines was born on July 24, 1941, in Camden, New Jersey, where she grew up attending St. Augustine’s Episcopal Church and Camden High School. She attended Johnson C. Smith College in North Carolina, then returned to Camden, where she taught elementary school and worked at the Temple University Crisis Center in Philadelphia, Pennsylvania, as an intake worker, where she set up a suicide hot line. She also worked at the Office of Economic Opportunities, counseling women for transition into the workplace.

In her early 20s she moved to California, where she was a case worker for the state. She was a key player in securing funding for a group home for developmentally disabled offenders and volunteered at the “House of Ruth” women’s shelter, meeting battered women at bus stations, police departments and hospitals and transporting them to safety at the shelter. She also was a case worker with the Volunteers of America, where she worked with inmates who were referred to the re-entry program to help prevent relapse into criminal behavior.

The Rev. Pat McCaughan captured Conyer’s faith and spirit in a January 2014 story on prayer for Episcopal News Service:

Dolores Conyer of Pomona, California, knows something about miracles. Her son, Timothy Gaines, was born severely mentally and physically disabled, with bilateral club feet, requiring numerous corrective surgeries. “I didn’t realize how much I relied on prayer until later,” Conyer recalled during a telephone interview with ENS.

“He was having all these surgeries and during them, he suffered cardiac arrest, the cause unknown. I felt that prayer and faith were the reason he survived. He used to say ‘the lady in white’ came to him. I think the lady in white was prayer, was faith, and all that was good.”

But Timothy was murdered at age 35 in 2001; his murder remains unsolved and Conyer, 72, recently was diagnosed with advanced lung cancer. But her faith remains unshaken and although she will always have questions about the whys of her son’s murder and her own health challenges, “there’s no need to do anything other than to maintain my faith, and just keep on praying,” she said.

“I think about all the pain and suffering Tim went through and why he had to die the way he did, alone, and a voice said to me, ‘No, he wasn’t. He was not alone’. So, here comes that lady in white.”

For the mean time, “I’m thinking in terms of when Tim was little,” Conyer said. “They told me he wouldn’t live past five years old. So, if he woke up, I made a plan for the day. We lived each day at a time.

“I’ve always been an adventurous person,” she added. “I’ve never been afraid to venture and try new things. This is another journey that I’m on and, hopefully, however it ends, it will have been a good ride. Faith and prayer play a role in that. If I didn’t have faith and prayer I wouldn’t be able to do anything, I would be lost.”