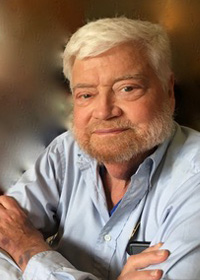 A person of boundless curiosity and joy in exploration, Peter Bergstrom was equally inspired by nature and by his fellow humans. As directors for 40 years of Camp Stevens Episcopal Camp and Conference Center in Julian, he and his wife Vicki created what they called “a peaceful place apart” where people from all over the world could come to appreciate the beauty of the natural world and experience a sense of community with others.

After attending UC Santa Barbara in the late 60’s, Peter joined VISTA (Volunteers in Service to America) in Chicago, where he met Vicki when the volunteers were all recalled to the downtown YMCA during rioting in the aftermath of Martin Luther King, Jr’s assassination.  Thrown together in this time of upheaval, they became engaged within six weeks of meeting, and were married on September 2, 1968 — Peter’s 22nd birthday.

As a conscientious objector during the Vietnam War, Peter, along with Vicki, did two years of alternative service with the Church of the Brethren Volunteer Service in Germany and in Greece working on projects furthering international relations and youth development. After returning to the U.S., Peter completed his degree in anthropology at UCSB in 1972, and while there saw a job posting for a camp executive director position in the small town of Julian.  He and Vicki decided to try it out for “a year or two” and the rest, as they say, is history.

During his time at Camp Stevens, Peter developed a wide variety of programs, from the “adventure group” style of summer camp, to Outdoor Education for school groups, to adult retreats.  Wilderness exploration trips to Baja and the Sierras, international travel for students and adults, and recruitment of staff from many countries added to the richness of the Camp Stevens experience.

His efforts also expanded the area of the camp, preserving an additional 200 acres of wilderness for future generations of campers. Several new buildings were constructed and older ones modernized, and after the Angel Fire of 2007 destroyed 12 structures, he gathered support to rebuild and improve the camp’s facilities. After his retirement as camp director in 2012, hundreds of friends donated money to build the Bergstrom Lodge, which was dedicated in December 2017 in honor of Peter and Vicki.

Broadening his interest and influence in the world of camping, Peter was a founding member of the Episcopal Camps and Conference Centers Organization, and later served as its executive director for nine years, until his retirement in 2015. He was also a leader in environmental stewardship within the Episcopal church, and in recognition of his service he was named an honorary canon of the Episcopal Diocese of Los Angeles. Camp Stevens was also designated a Jubilee Center by the Diocese of San Diego, for its “extraordinary transformational efforts” within the community.

Peter was also a dedicated citizen of the town of Julian, serving on the school board and helping to organize the Julian Wild & Scenic Film Festival among other community events. Most far-reaching was the founding of the Volcan Mountain Foundation in 1987, which to date has helped to preserve more than 30,000 acres of land as the Volcan Mountain Wilderness Preserve.

In his free time, Peter was always out exploring the world — planning trips overseas with friends and family, fishing and hunting throughout Baja and California, and having adventures with his children, Jenne and Erik. He had a lifelong interest in progressive politics and activism, and worked on many campaigns from local to national, most recently as a founding member of the Julian chapter of the Indivisible movement.

His many friends and colleagues remember his warmth, compassion and generosity, his love of great conversations and good food, his dry sense of humor, and most especially his uninhibited joy in singing and dancing.

Peter died after a long series of illnesses, surrounded by his family, in a beautiful place that he loved. He would have liked to have had more time to explore this world, but his favorite thing was always a new adventure, and as Peter Pan said, “to die will be an awfully big adventure”.