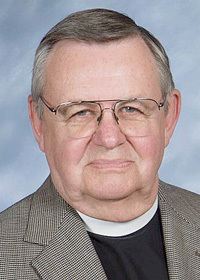 The Rev. Canon Richard Alden Wagner, former vicar of St. Alban’s Church, Yucaipa, and a longtime member of Diocesan Council, died June 10 at the age of 80.

According to his family, Dick Wagner was always going to be a minister. He was born in Fitchburg, Massachusetts, on Dec. 9, 1937. After graduating from Tufts University in 1959, he entered the Air Force as a pilot. Twenty-two years later, he entered Seabury-Western Episcopal Seminary, and his original life’s calling was realized. He was ordained a deacon on May 11, 1984, and a priest at Trinity Church, Wheaton, Illinois, on Nov. 17 (St. Hugh’s Day) of that year. He served as curate at Trinity for 2 years. He was then called to be vicar of St. Hugh of Lincoln Church in Elgin, Illinois. In 1990 he became rector at the Church of the Annunciation, Gurnee, Illinois. Wagner served under Bishop James Montgomery and later Bishop Frank Griswold (later presiding bishop of the Episcopal Church) during his tenure in the Diocese of Chicago.

In 1996, Wagner became rector of All Saints Church, Vista, in the Diocese of San Diego, serving under Bishop Gethin Hughes. He served there until 2000, when he was called as vicar at St. Alban’s, Yucaipa, Diocese of Los Angeles, serving Bishop Frederick Borsch, Bishop Bob Anderson (a friend since seminary days), and Bishop Jon Bruno. He served for many years as an elected delegate-at-large on Diocesan Council. Bishop Bruno named him a canon of the Cathedral Center of St. Paul in 2010.