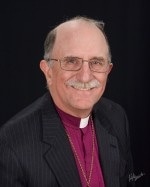 The Rt. Rev. William A. Thompson, who from 2009 to 2014 was bishop of the Anglican Church in North America (ACNA) Diocese of Western Anglicans after more than 30 years as rector of All Saints’ Episcopal Church in Long Beach, died June 21.  He was 73 and in recent years had suffered the effects of Alzheimer’s disease.

Survivors include his wife, Claudia; their children, Matthew, Christopher, and Betsy, and their families; and Thompson’s sister, Barbee, among others. Services are pending.

The Rt. Rev. Edward Little, recently retired as bishop of the Episcopal Diocese of Northern Indiana, remembers Thompson as “one of my oldest and dearest friends.” Little told The News that the two were seminary classmates at Seabury-Western (Class of 1971) and ordained in the same liturgy. “For many years, we served in neighboring parishes [All Saints, Long Beach, and St. Joseph’s, Buena Park], and he and his wife, Claudia, were godparents to our son, and vice versa – a long connection indeed.

“Bill was a faithful and committed Christian,” Little noted. “He radiated joy in Christ and a deep love for people. I’m a better follower of Jesus because of his strong and vibrant witness, and a countless throng can join me in gratitude for the way that his faith enriched and encouraged ours.”

ACNA was formed in 2009 by clergy and laity who left the Episcopal Church citing theological differences following the 2003 election of the Rt. Rev. Gene Robinson of New Hampshire as the Episcopal Church’s first openly gay bishop. In the Diocese of Los Angeles, Thompson’s parish was one of four in which a majority of members voted to leave the Episcopal Church and sought to retain land and buildings – located in La Crescenta, Long Beach, Newport Beach, and North Hollywood – which the California courts later returned to the diocese, thereby setting statewide precedent. Thompson was among clergy deposed from Episcopal Church ministry in 2005, and an agreement was later reached with Bishop J. Jon Bruno for the All Saints’ congregation to purchase the Long Beach buildings from the diocese.

The ACNA diocese that Thompson served as bishop was, during his tenure, comprised of 28 congregations and church plants located from San Diego north to Washington state and east to Wyoming. His longtime Long Beach church went on to become the diocese’s cathedral.

In 1975, Thompson was elected sixth rector of All Saints’ in 1975 and succeeded the Rev. Canon Donald Behm, who had served since 1966, the same year that Thompson received the vestry’s unanimous support as a postulant for ordination. He returned to the parish as curate in 1973 and then became rector shortly before his 29th birthday.

Within the Diocese of Los Angeles, Thompson served on Diocesan Council, the Commission on Ministry, the Ecclesiastical Court, and the Clergy Sexual Misconduct Task Force, and was twice elected an alternate deputy to General Convention. His leadership included strong stewardship and assuring that All Saints’ – whose longtime members included California’s late Gov. George Deukmejian – was among lead parishes that most generously contributed to the diocesan Mission Share Fund.

Also a past president of the California Board of Behavioral Science Examiners, Thompson was an avid mandolin player. “My mandolin brings me to God,” he wrote in a 2000 All Saints’ newsletter column. “Mandolin is hard, frustrating, angering, nerve-racking, fun, easy, simple, complex, painful, transcendent, concrete, abstract, worldly, heavenly, and countless other adjectives. It always, however, brings me joy, because in playing, practicing, and listening I touch the creativity and personality of God. I am somehow being faithful to what God called me to be.”