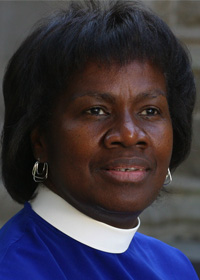 The Rev. Zelda Kennedy, who until her retirement in 2017 served on the clergy staff of All Saints Church, Pasadena, died Dec. 29 at her home in North Carolina.

She is survived by her daughter April Browne, her sister Prescola Johnson (Larry), brother Cyril Miller, Jr. (Renee), and Medi Ghafari (Joyce). She was preceded in death by sisters Fredricka Delevoe and Sylvia Mack.

Zelda Miller was born September 1, 1946 in the Bahamas. She was the fourth of six children born to Cyril H. Miller, Sr. and Mildred (Butler) Miller.

She was three years old when her family moved to Florida and became affiliated with St. Andrew’s Episcopal Church. It was here that the foundation was laid for her life-long zeal and passion for ministry and servant-leadership. At St. Andrew’s, she was an active participant in Sunday School, the Episcopal Youth Council, church oratorical and debating events, the Girls Friendly Society and the young people’s choir, and often assisted her mother with the altar guild.

Her charisma, unique magnetism and deep love for others were fully apparent during her early years. As a teenager she distinguished herself through scholastic achievements, social activism, creativity and as a leader.

Zelda Miller attended Fisk University for two years and Hunter College in New York City prior to earning her bachelor of arts degree from the University of North Carolina, Chapel Hill, in 1984.

She relocated to New York in 1967. Her striking stature landed her modeling jobs. During this time she also accepted a pivotal corporate opportunity at Chase Manhattan Bank. During her Chase Manhattan Bank tenure from 1971 to 1977, she rapidly rose through the administrative and management ranks to become program coordinator for Corporate and Social Responsibility.