Charles Dickens and the uncommon strength of memory 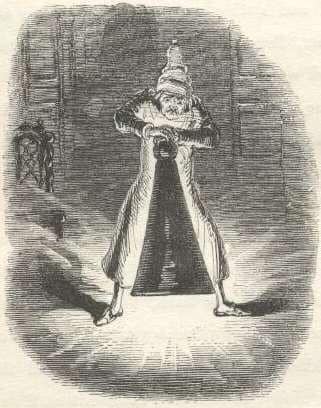 From the first edition of “A Christmas Carol” in 1843, John Leech’s drawing of Scrooge extinguishing the ghost’s revealing light

Like the Nativity narratives in Matthew and Luke, Charles Dickens’ “A Christmas Carol” reveals something new every time. Leaping from the page as I read this year was a detail about the ghost of Christmas past, who reminds Scrooge about his childhood and young adult sorrows. “The [ghost’s] arms were very long and muscular; the hands the same,” Dickens writes, “as if its hold were of uncommon strength.”

This has so far proved impossible to bring across in a movie or even cartoon “Carol.” A lot of greats have gotten the part of ghost one, from Michael Dolan to David Johansen, Olivia Colman to Gary Coleman. They usually evince a gentle, childlike manner, with no evidence of Horowitz’s hands or Popeye’s biceps. And yet demonstrating the the past’s iron hold on Scrooge is the ghost’s greatest gift. We learn that his father never forgave him for his mother’s death in childbirth. His sister, Fan, dies the same way, engendering his deep resentment of his nephew. I’m thinking of a nonfictional man, whom the Electoral College gave immense power, who seems to spend each day trying to escape the judgment of the ghost of his father. 

We call these family of origin issues. Everybody’s got some. Even those who don’t have them, have them, if they end up lacking empathy for others’ suffering or are too quick to tell those battling ancient hurts or demons to get over it. Therapists might wish they could touch us lightly on the arm, take us back to early days, and show us what happened instead of having to spend years dredging it up. Remembering his old wounds, Scrooge begins to soften almost immediately.

Ghosts two and three have it relatively easy, turning Scrooge’s new self-awareness into confidence that he can still amend his life. And yet another arresting image in the text is missing from some of the movies. Scrooge takes the ghost’s cap and uses it to extinguish its revealing, clarifying light. He has learned quite enough about his old shames for one night. For most people, the past indeed exerts uncommon strength, requiring considerable energy to pry its bony fingers loose. If we’re used to our pain, if we’ve made room in our lives for it, it might be hard to let it go.

Those lucky enough to take a unit of Clinical Pastoral Education, such as candidates for ordained ministry, learn that by practicing the loosening of their grip on us, we can turn shame, regret, anger, or fear into the means of love. Think about someone who has to be in control all the time, for instance, or who thinks they have to solve everyone else’s problems. Think about people pleasers, struggling each day to earn their place in the world by being lovable and indispensable. If you don’t know someone on this list, you’re probably someone on this list.

Whether they’re because of family of origin or other early experiences, these are all impulses the pastor had better get under control. In CPE, usually during hospital visits, one is reminded that happy talk, empty reassurances, or especially talking nervously about ourselves won’t cure stage four kidney cancer, a child’s agony over their parent’s dementia, or a parent’s over a fetal demise. Yet the long, strong arm of some distant memory or disappointment will usually try to muscle us into trying to satisfy our need to be needed, or our preference not to feel uncomfortable in the presence of the inconsolable.

If we do that, we can end up turning patients and loved ones into the latest victims of our trauma. In life as well as in hospital rooms, for us to be the very means of God’s grace, showing up is usually enough — as Scrooge learned on Christmas Day.