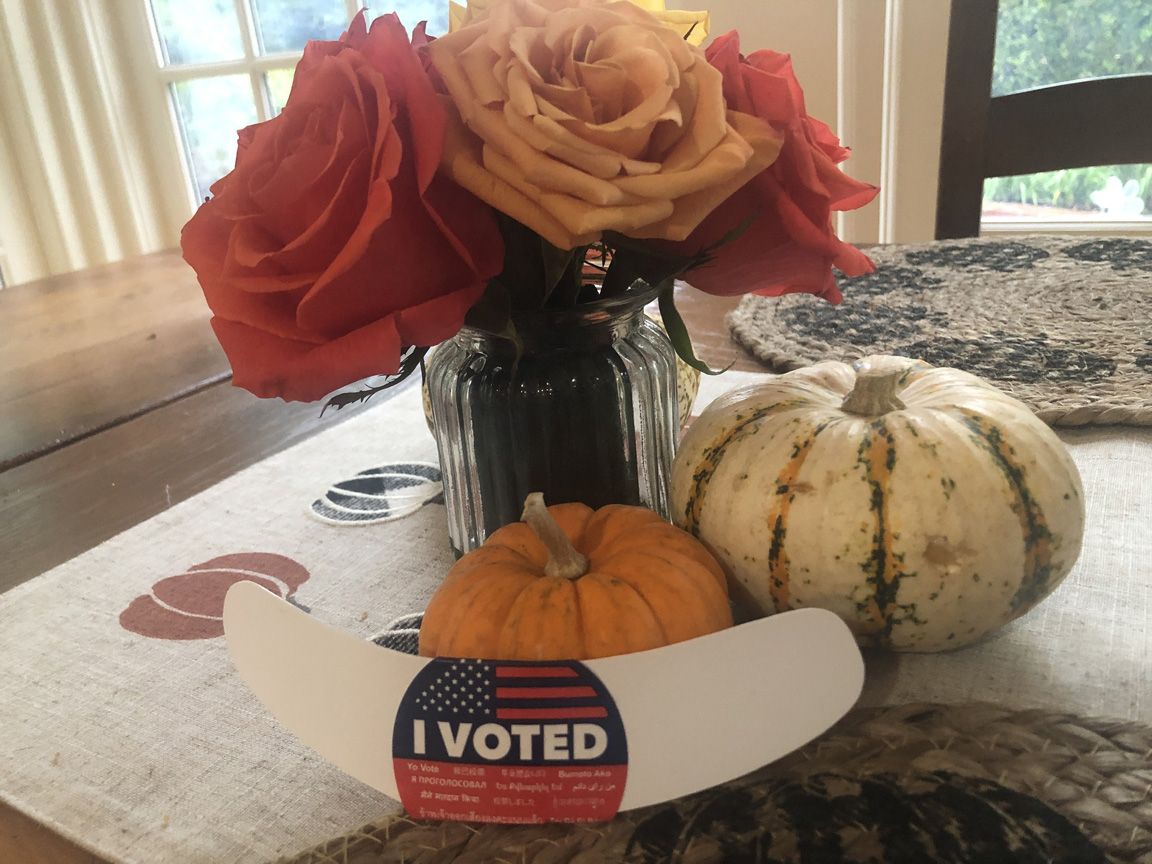 This morning in Pasadena finds me grateful for the much-needed rain as well as for voting by mail. My ballot is dry, and so am I.

I’m also praying for those standing in line all over town. For the last month, poll workers have been training at St. Paul’s Commons, Echo Park. It’s been a joy to see them, these linchpins of freedom. Voters won’t get spiced cider at their polling places, but maybe a smile and a place to put their umbrellas. May all our votes be well cast and counted, and may everyone in our country who tries to suppress votes or keep them from being counted receive an opportunity for true repentance, for they are sinners in the sight of the angels of democracy.

What I’m not feeling is apocalyptic. In midterm elections, as we all know, the tide goes against the party holding the White House. Like the liquid in a carpenter’s level, independent minded, less ideological, less affiliated voters tilt left, then right, then left again, deciding outcomes based on how they feel in the moment. Everyone is an expert about the lives they’re living. With the worst inflation in 40 years, it will be the least surprising thing in the world if the GOP gains enough House seats for a majority. The Senate still looks to be up for grabs. However it comes out, Republicans don’t have a better plan than the Democrats and the Fed. Inflation’s about the same in Canada and western Europe. It’s worse in Hungary, with authoritarian nationalist Viktor Orbán in charge.

But elections are a referendum on how the more changeable among us feel at a given time. Most of the world’s governments spent like mad to keep their economies from imploding during the pandemic. We appreciated it at the time. Leave a comment below if you sent the checks back. Now butter costs $5 a pound, plus word comes of a Thanksgiving turkey shortage. Standing in a voting booth, which turkeys will swing voters blame?

If a Republican Congress spends two years trying to impeach and convict President Biden for wearing aviator sunglasses, swing voters won’t appreciate that, either. Elite Republicans understand this. But their better angels are being held hostage. Today’s election is about butter and turkeys – and, for not a few swing and crossover voters, reproductive freedom. The next one will be about keeping Trump out of power. We will get to that soon enough. For now, please vote, stay dry, and, as Andrew Sullivan used to say, know hope.

Almighty God, to whom we must account for all our powers and privileges: Guide the people of the United States in the election of officials and representatives; that, by faithful administration and wise laws, the rights of all may be protected and our nation be enabled to fulfill your purposes; through Jesus Christ our Lord. Amen.