The Bishop’s Blog: Jerusalem – a pilgrimage of prayer 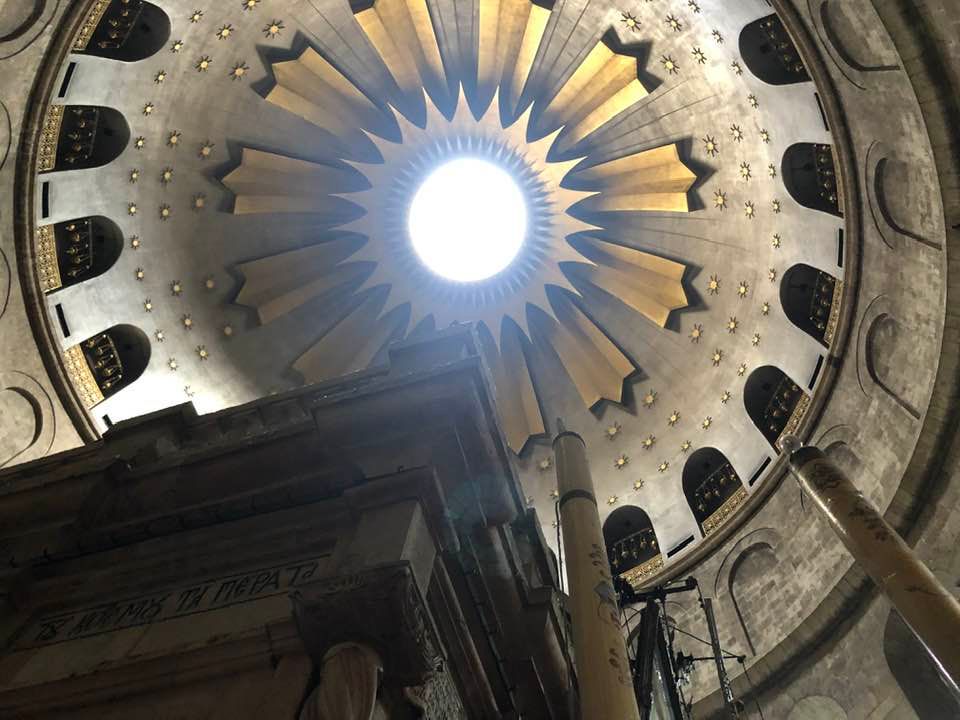 Jerusalem is by no means a city of prayer for all people. Psalm 87 mysteriously says this: “Of Zion it shall be said, ‘Everyone was born in her.’” Billions would take umbrage. But while the city’s spiritual demographic is chiefly Abrahamic, we can surely say that it’s a place of prayer for the Jews, Christians, and Muslims of all nations.

It was with as universal a frame of mind as I could manage that I set off on my journey of prayer this morning. At each place, besides those for my family, I offered prayers for all the names on all the prayer lists of all the institutions of the Episcopal Diocese of Los Angeles as well as for prayer teams and prayer warriors who pray those lists daily. I also offered a prayer anticipating all the names folks are sending me to place in a crevasse of the Western Wall tomorrow. If you haven’t give me your names yet, you can do so in the comments (on Facebook here) or via Facebook Messenger. First names only, please, and without the reason for the prayer (since God knows already).

Most mornings, my first stop has been the Church of the Holy Sepulcher, and so too today, which was my first chance to kneel at the marble slab in the Holy Edicule, believed to rest above the place of Jesus Christ’s burial and Resurrection. That was as close to the physical heart of Christian memory as my prayers could get.

Then to the Western Wall, where I prayed while touching one of King Herod’s cool stones, and up the enclosed ramp to the Temple Mount-Ḥaram al-Sharīf. Eyeing the x-ray, an Israeli security officer spotted the harmonica in my backpack and suggested I not play it while visiting the Nobel Sanctuary. I thanked her.

Non-Muslims aren’t allowed to enter the al-Aqsa Mosque or Dome of the Rock, and our overt prayer is discouraged, so I found a quiet spot for silent prayer to the God I share with my Muslim siblings. At 11 a.m., a police officer told me and other non-Muslims to leave. I thought we had until 11:30, but it is wise not to argue.

Just outside the Chain Gate leading back into the Old City, a group of Jewish men were dancing, singing, and making a point as Palestinian Authority police looked on. I had a pomegranate juice and told the Arab vendor that he had the most interesting spot in town.

Next it was through the Dung Gate and down into the Kidron Valley to the Garden of Gesthemane, where I sat praying near ancient olive trees with agonized faces screaming from the bark, and the Church of All Nations, where I prayed after touching the stone that tradition holds was the place of Jesus’s temptation.

It was just noon when I reached the traditional site of Mary’s burial (a claim about which Ephesus has a thing or two to say). A young man with a stern face said it was closed for lunch and shut the big brass doors. I watched as two young women knocked. Same young man, but now with a gentle face, a kind face, a face open to the ineffable movement of the Holy Spirit. He admitted them for just a minute and started to close the door on me again. I noted his inconsistent policy and won my minute to scoot down the stairs, where I prayed “ditto” and crossed myself.

I returned to the Old City through the Lions’ Gate and along the Via Dolorosa, past the booth where Muslims offer free copies of the Quran to Christians pilgrims and a bit of proselytizing to those who will stop and listen, as I did.

This afternoon, finally, to the Garden Tomb, in East Jerusalem, which I’d walked past a hundred times since first visiting Jerusalem in 2007. Our own Florence Mattar lived here as a girl. During the Six-Day War in 1967, her father, the custodian, was killed by Israeli soldiers when he opened the gate to them.

Mary has two burial sites, Jerusalem offers at least two upper rooms, neither of which is probably the upper room, and so two places are associated with Christ’s crucifixion and Resurrection. St. Helena chose the site for the Church of the Holy Sepulcher in the fourth century, and archaeologists tend to favor her view. In the Garden Tomb’s favor are its proximity to Skull Rock, which nicely fits the Biblical account, and being outside the first-century city walls.

It’s run by an English nonprofit which is careful not to make a dogmatic claim; a recent change, I’m told. Everyone wants to know where you’re from and if you’ve been before. It feels safer and tidier, with praise music playing in the gift shop, a brochure, a logo, and a web site, all very un-Holy Sepulcher. My heart will always be with the holy chaos of Helena’s church. But the spirit of my day was not to try to lay claim to the mind of God. So I prayed my list at the Garden Tomb, too, and our God in Christ was surely there, listening. 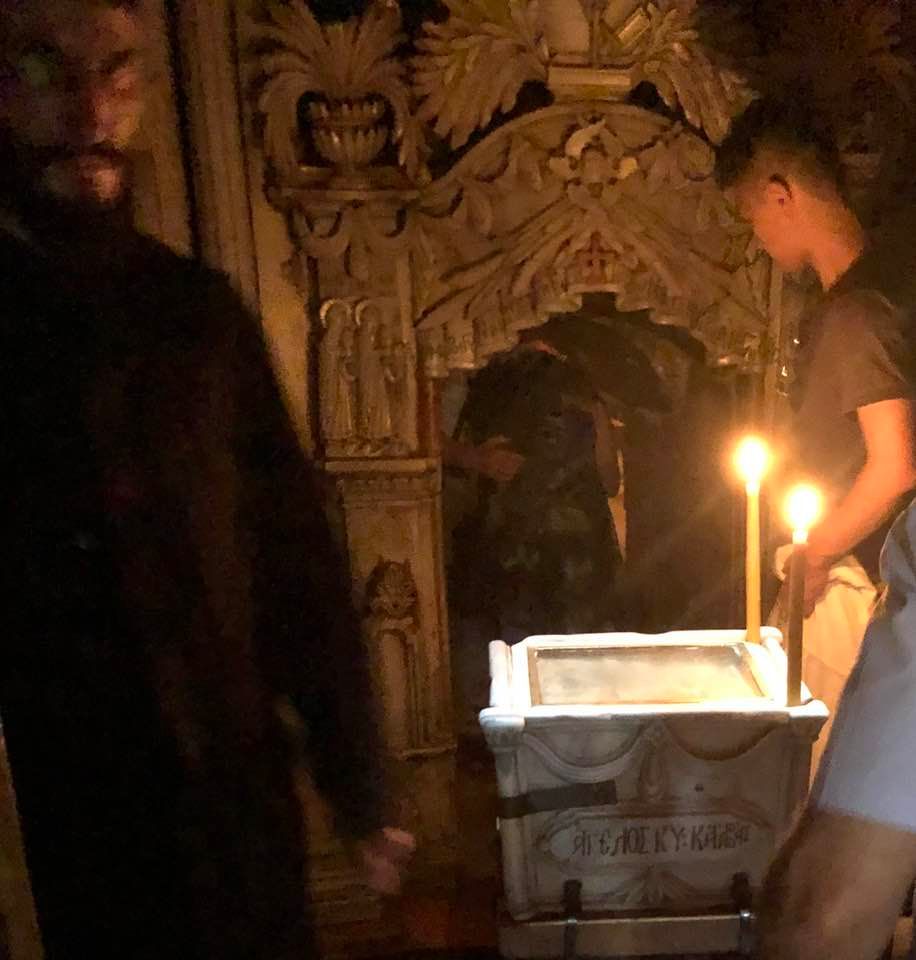 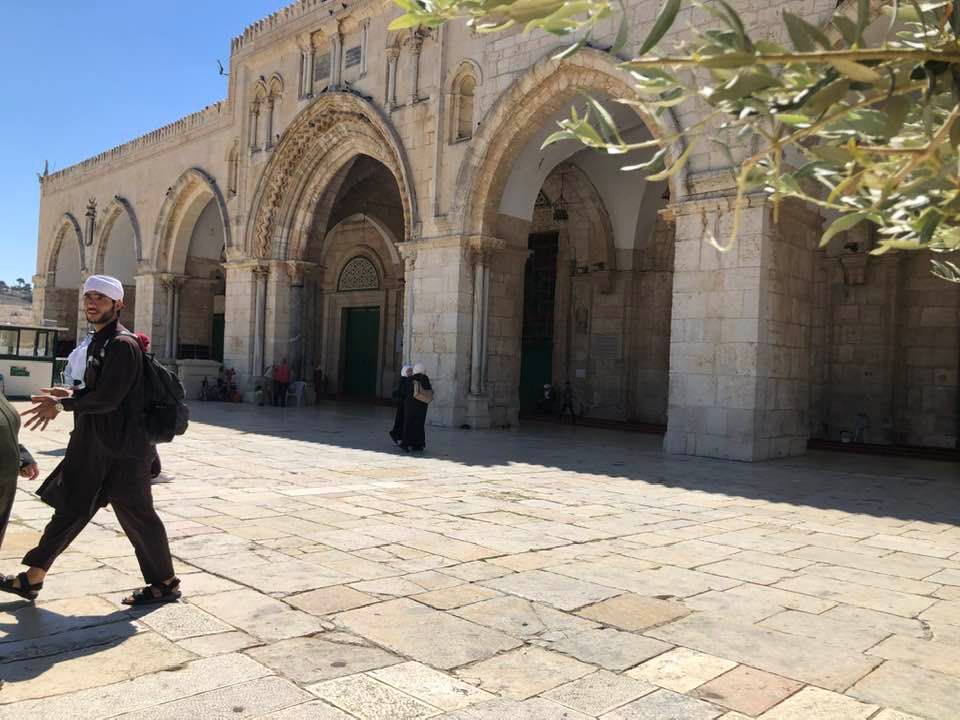 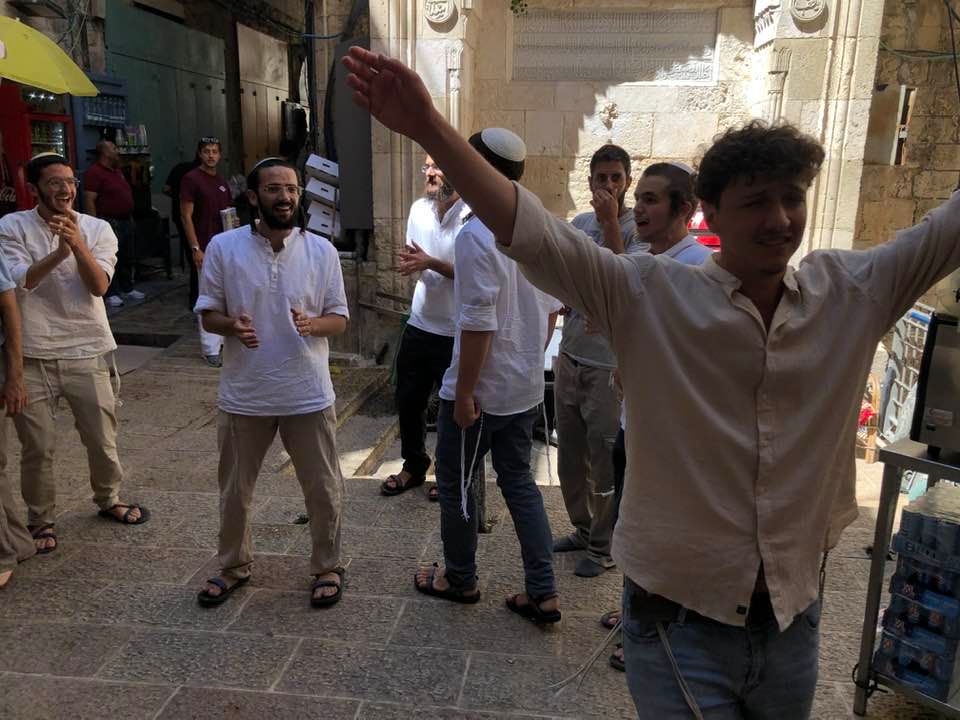 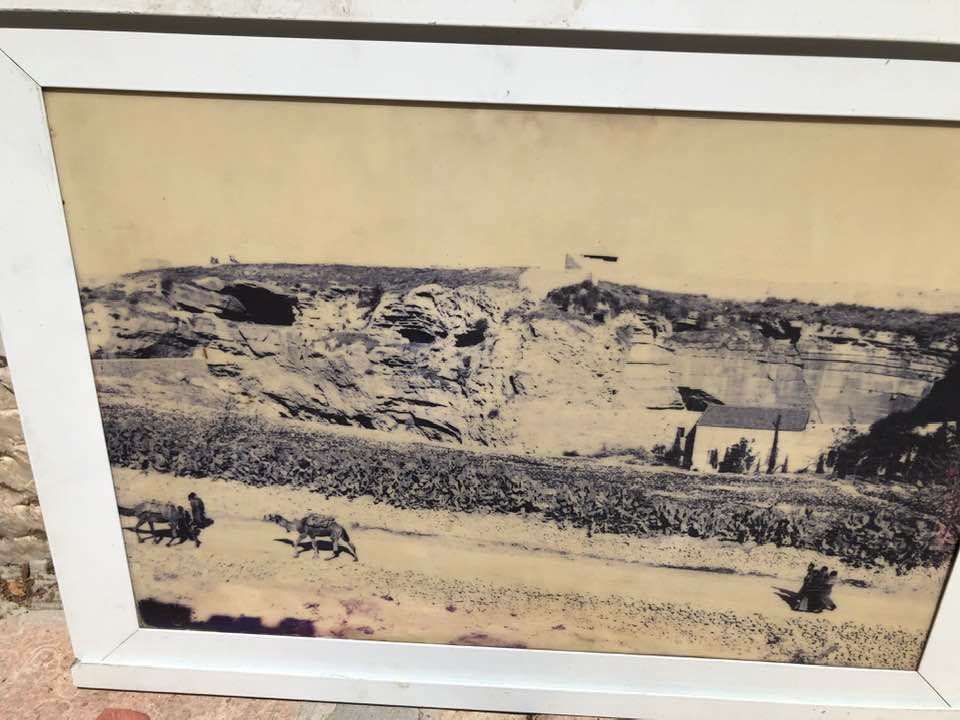 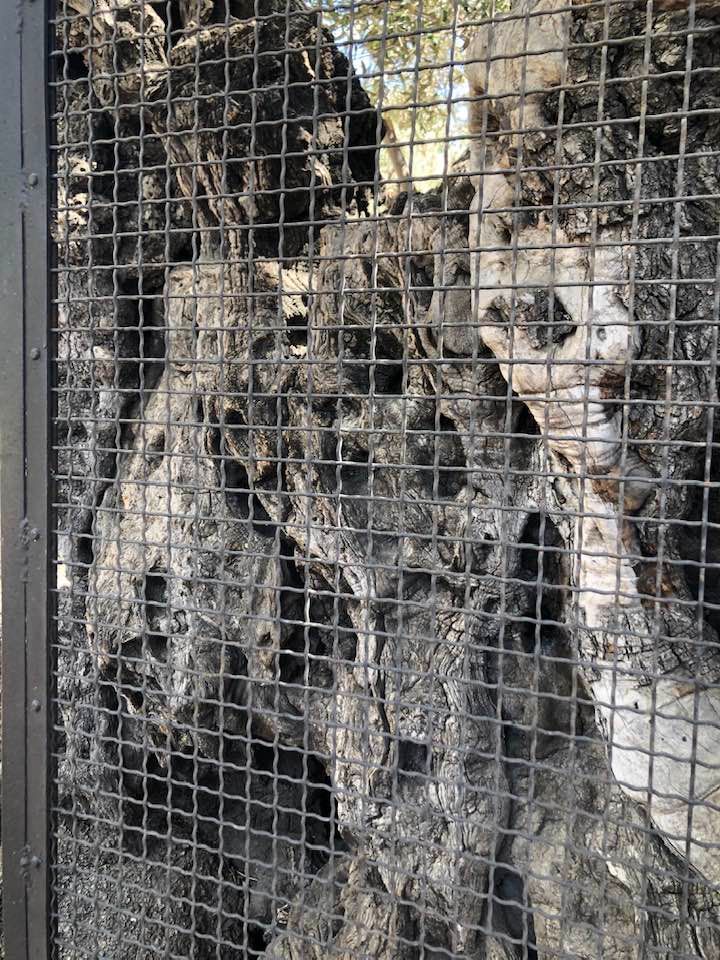 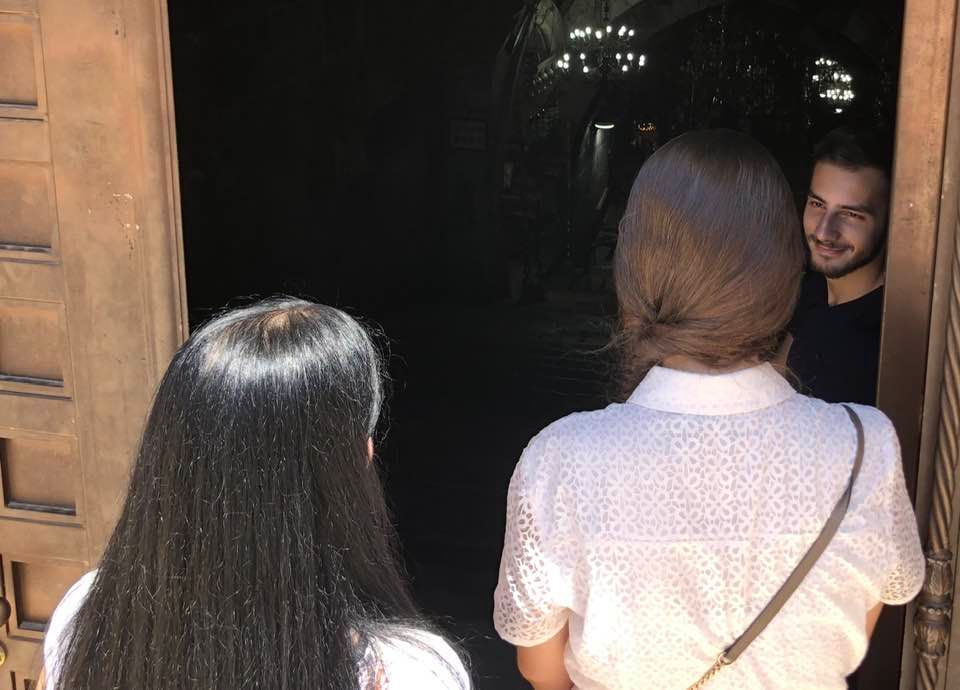 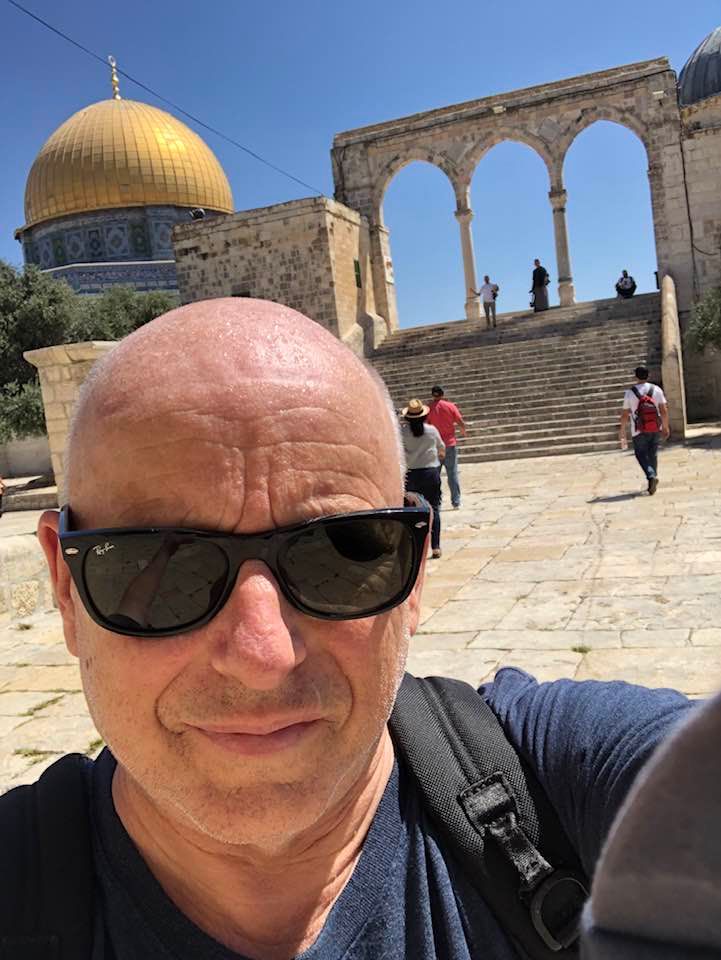 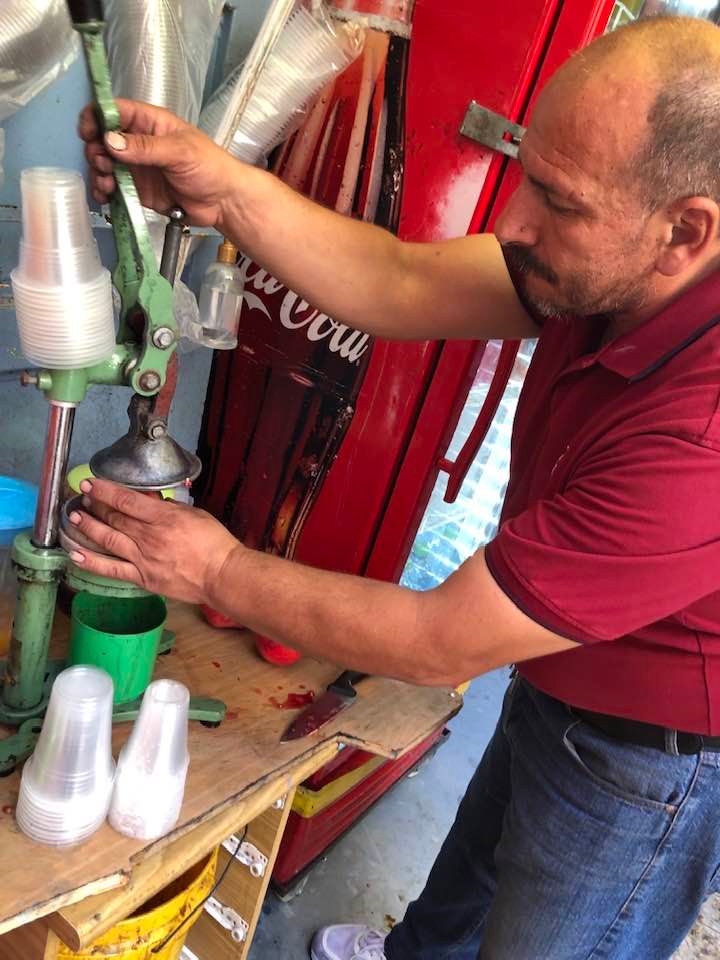 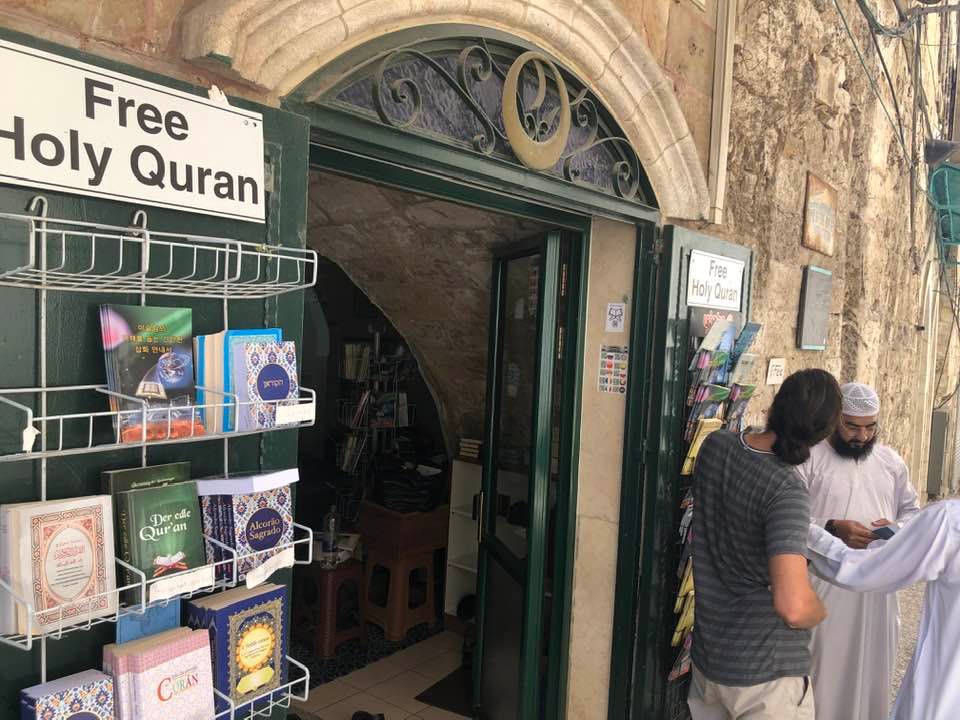 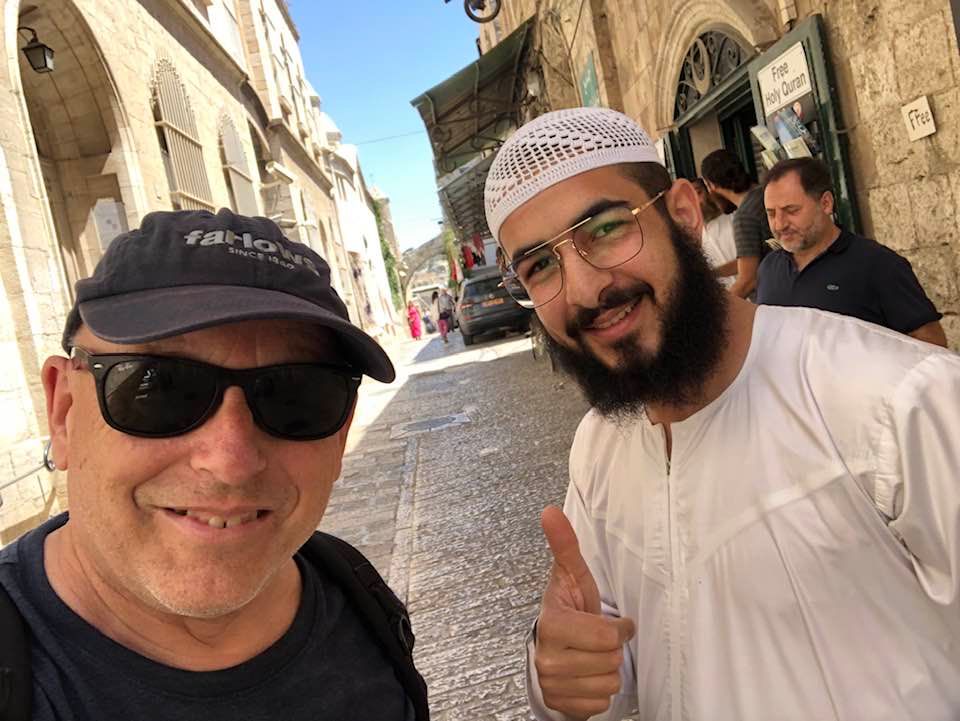 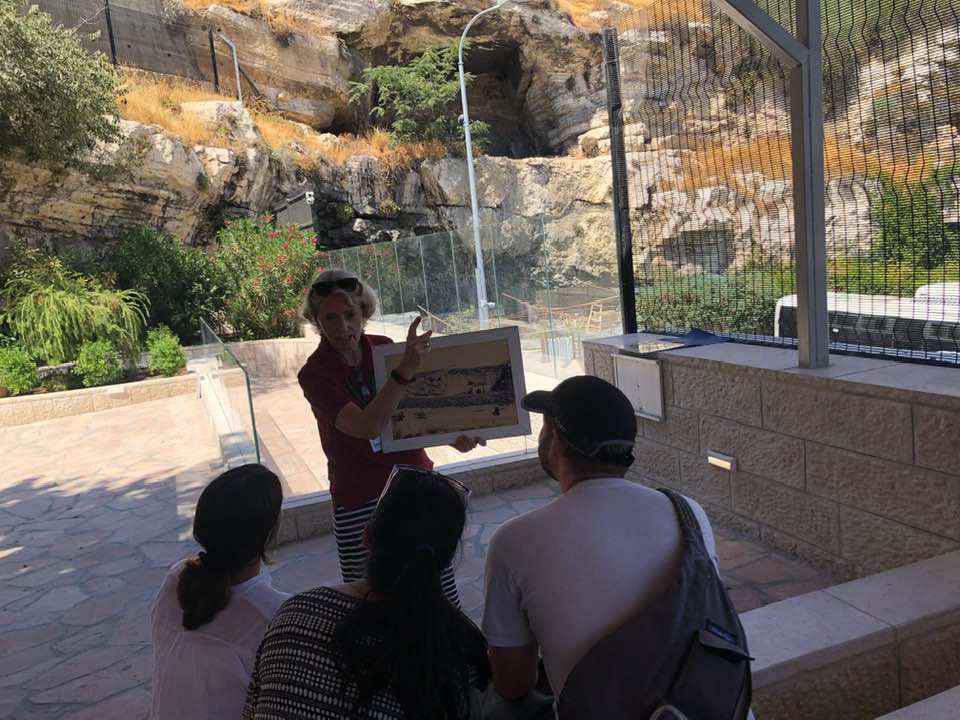 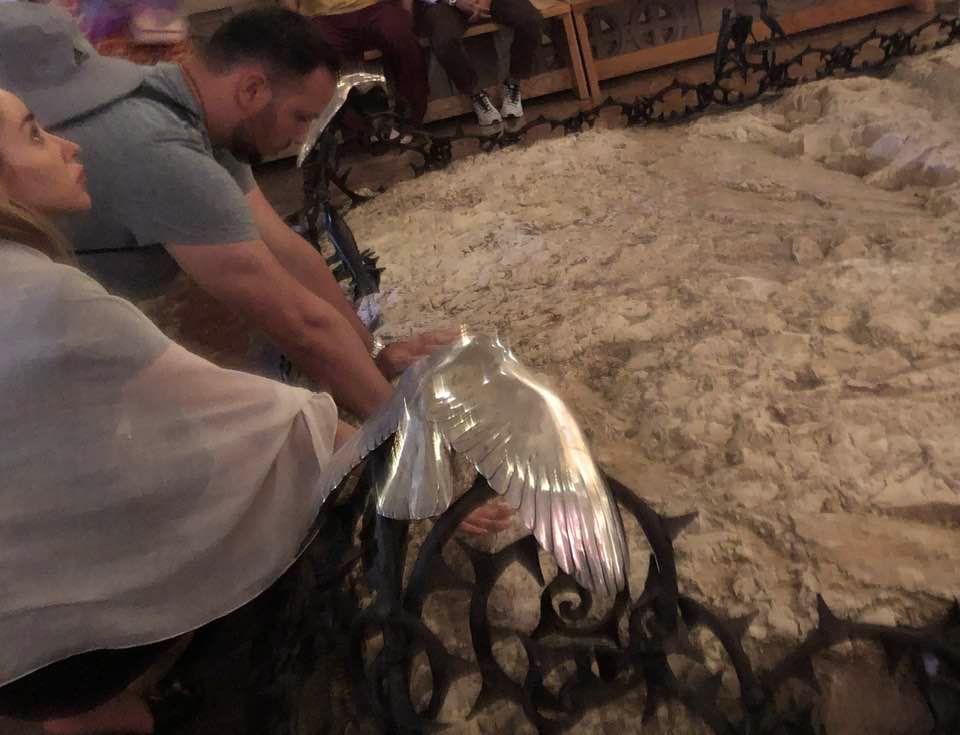 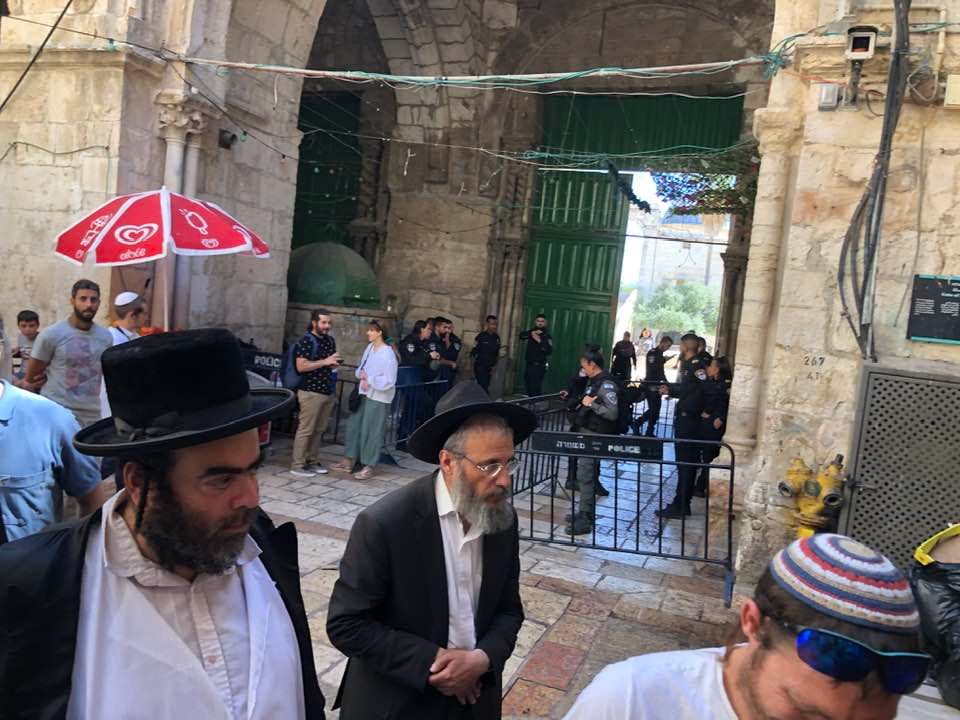 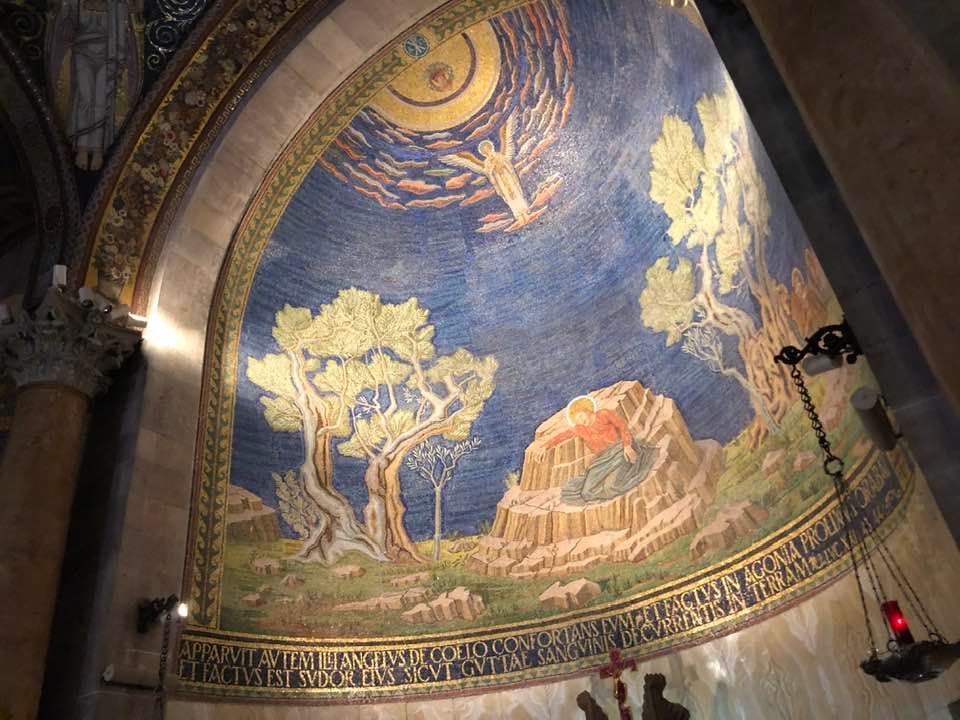 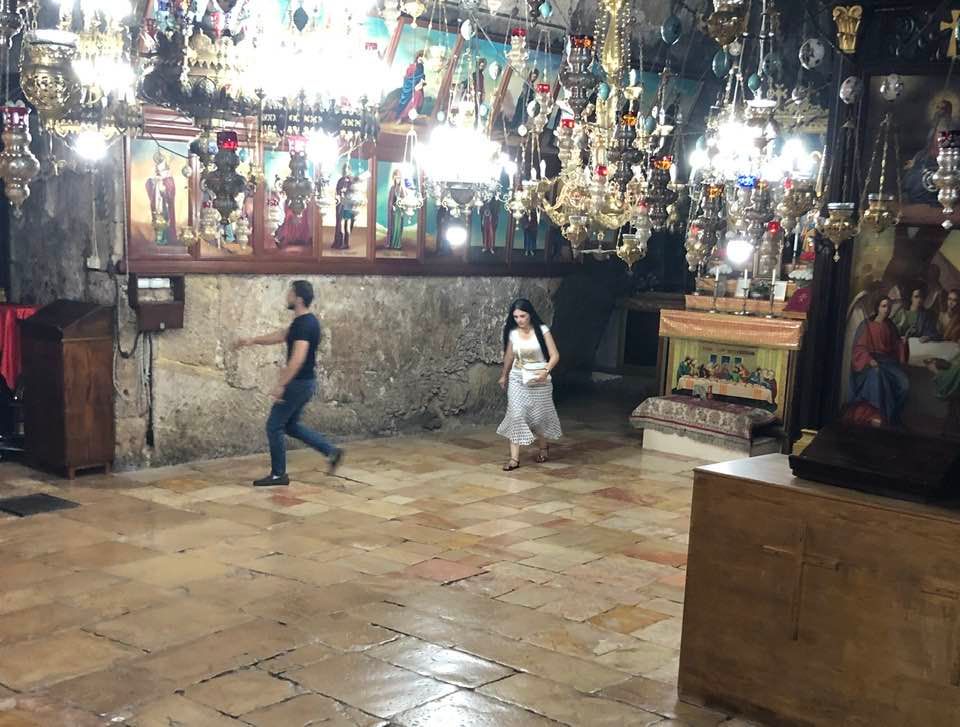 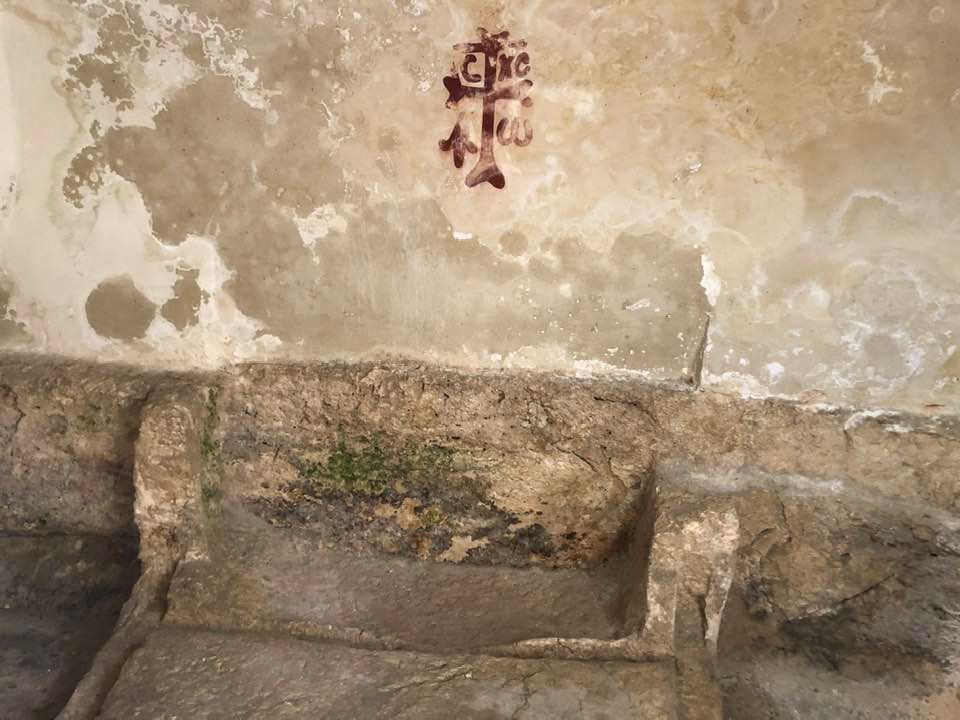