Taylor tells convention he is ‘recklessly optimistic’ about the church, the future 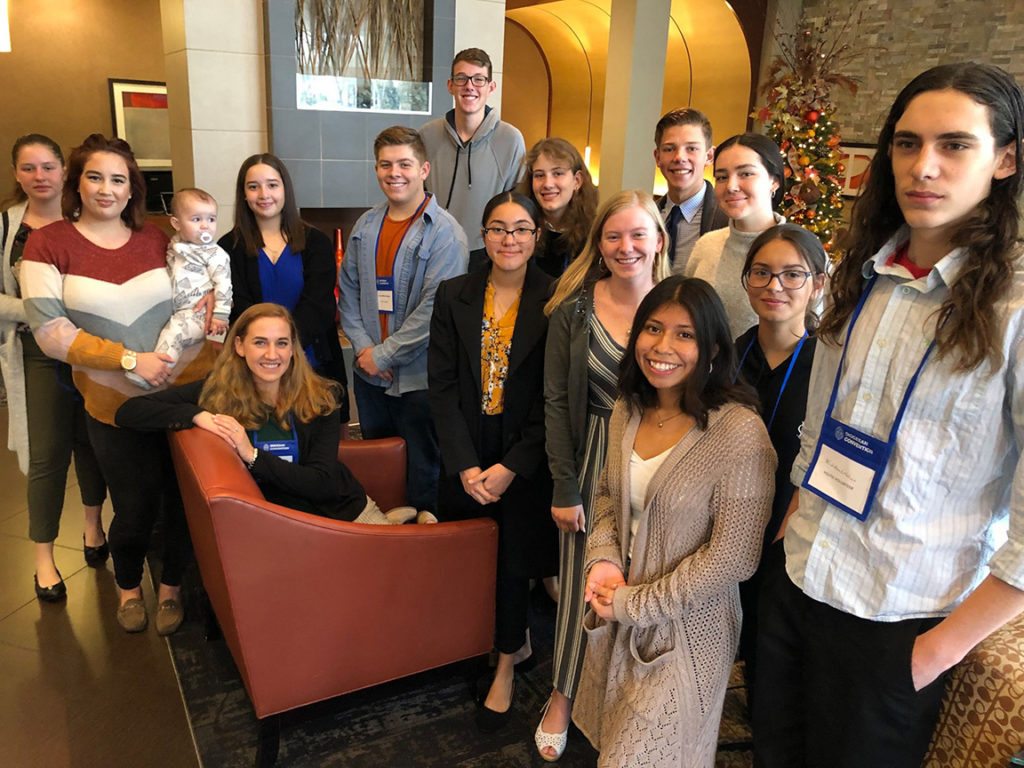 Some of the youth working at convention gather for a photo by Bishop John Harvey Taylor.

Los Angeles Bishop John Harvey Taylor on Nov. 15 welcomed the 124th annual diocesan convention back to Riverside, issuing a call for community activism and neighborly curiosity, and inviting congregations “to have me over for dinner” or a Thursday evening potluck to share sustainability strategies.

He also honored victims of a Santa Clarita school shooting a day earlier, and welcomed Riverside Mayor Rusty Bailey, who briefly addressed the gathering, themed “The Lifelong Way of Love.”

Churches that thrive and grow “are communities of pilgrims on journeys of lifelong individual and institutional discovery,” he said. 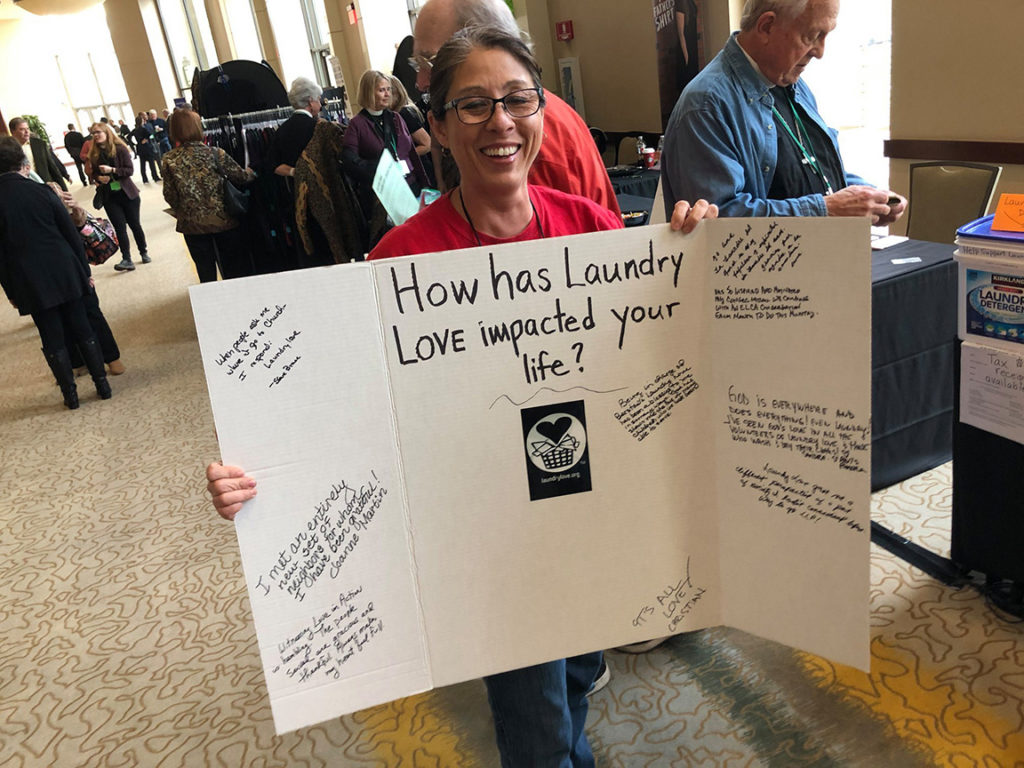 Bishop Suffragan Diane Jardine Bruce cited Asian American immersion experiences, the Gathering: A Space for Asian Spirituality, and hosting the Union of Black Episcopalians international gathering in Los Angeles among the accomplishments of 2019. She echoed themes of vitality and diversity of communities, stewardship and financial transparency.

“While all facets are vital in living a Christian life, what undergirds it all, I believe, is the second – LEARN. This past year we’ve concentrated on learning.”

She announced a March 7, 2020 diocesan Ministry Fair at Campbell Hall, and a third annual stewardship event planned for the first Saturday in June. She also cited a movement to engage everyone in the diocese in clinical pastoral education, or CPE, typically undertaken by those being ordained, and now available to laypersons in a program led by the Rev. Jana Milhon Martin.

Similarly, Canon to the Ordinary Melissa McCarthy described her role as chief of staff, which among many other duties involves working with the transitions and formation office regarding clergy and congregational transitions. “My goal is to visit as many churches as I can,” she said. “Because knowing our congregations helps me know my job better.” 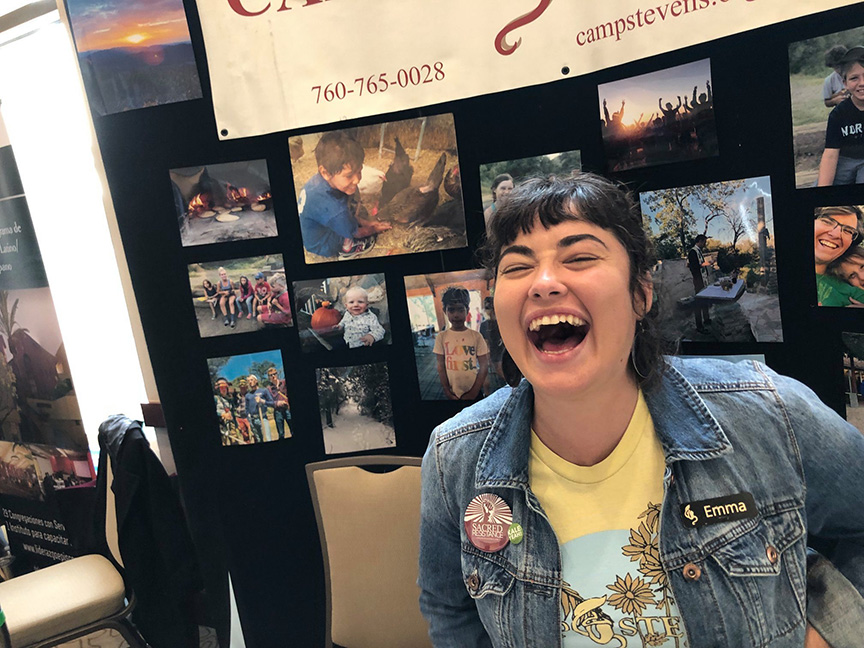 ‘Helping each other to the finish line’

His address frequently interrupted by laughter and applause, Taylor invoked the image of a marathon, and the role of Christians to witness to and help each other cross the finish line.

Critical of the nation’s “do-nothing politicians,” he cited the Rev. Nancy Frausto, associate rector at St. Luke’s, Long Beach who, along with her family fled violence in Mexico nearly 30 years ago, beginning “their journey to the finish line, the promised land.”

Yet Frausto and about 700,000 other young Americans, considered part of the DACA cohort, who “ran all the races society prepared for them” — including some 800 who’ve served in the U.S. Armed Forces — may be told by the Supreme Court that the government has the right to end the program and their chances for citizenship, he said.

In addition to supporting asylees through the diocese’s Episcopal Sacred Resistance task force and IRIS, or the Interfaith Refugee and Immigration Service, churches and individuals can help through the Episcopal Community Federal Credit Union, he said.

“The credit union is inviting us to give or to lend capital to help IRIS help asylees with their expenses while they wait for their hearings,” Taylor told the gathering. “A dollar loaned or donated will help a fellow pilgrim make it across the finish line.”
Episcopalians are ‘indispensable’ 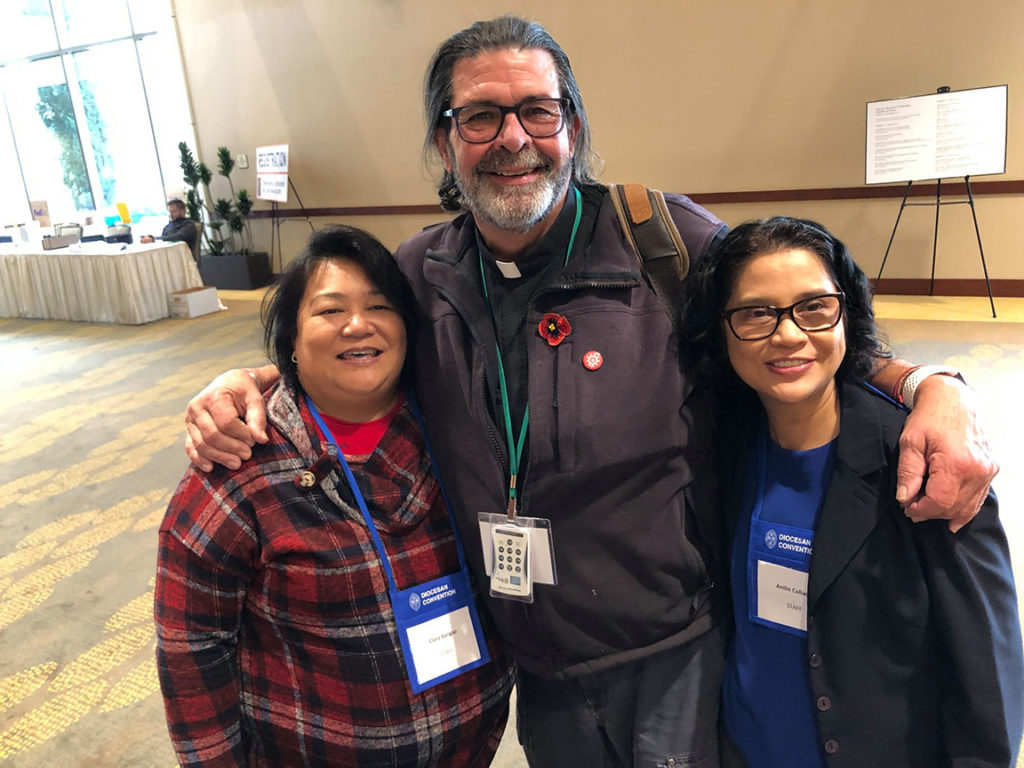 While many in the church may be anxious about stagnant numbers, Taylor told the gathering he is recklessly optimistic about the future. With New Community gatherings and other efforts, “we seek a unity in diversity, which makes absolutely no sense in a culture based on leveraging and scapegoating and dividing people against one another for political gain or profit,” he said. “Here’s a little secret, my fellow anxious Episcopalians; we are indispensable.”

The standing committee has received a report from the Lombard Mennonite Peace Center about the 18-month reconciliation process in which the diocese engaged, Taylor said. The report focuses on best practices — many of which are already being followed — in governance, finance and care for one another “so some future conflict won’t be so painful and disruptive to our blessed relationships with one another.”

The standing committee will report its review of the document in early 2020 “and I will write a letter to the diocese with some thoughts of my own,” Taylor said. 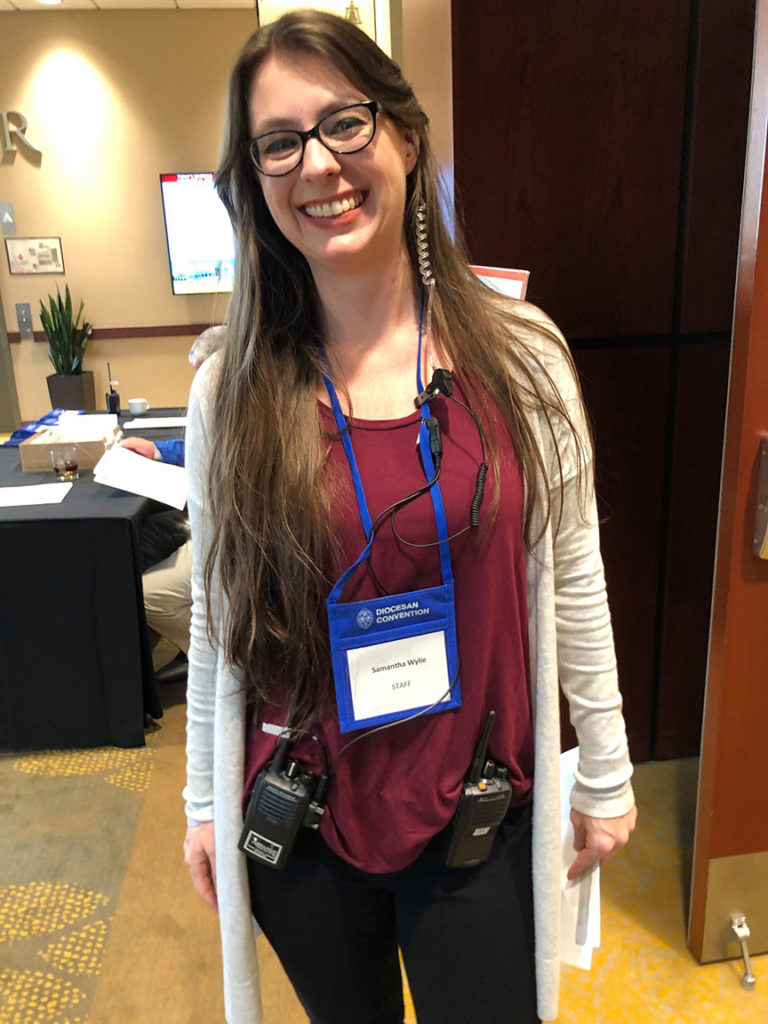 A next step will be the three-year “One in the Spirit: Finding Divinity with Difference” initiative, led by the Rev. Canon Susan Russell.

She told the convention that the effort “will build diocesan capacity to expand relationships and deepen connections across differences to strengthen our shared commitment to follow Jesus.” A steering committee has been appointed, and was presented to the convention. Committee members are Rise Worthy-Deamer, Canon Suzanne Edwards-Acton, the Rev. Antonio Gallardo, the Rev. Norma Guerra, the Rev. Canon Gary Hall, the Rev. Peter Huang, Karen James, Wendy Lords and the Rev. Jennifer Pavia. More about One in the Spirit is here.

Other antidotes for anxiety included achieving financial stability through transparency and trust, creativity in Christian service leading to sustainability that will reduce pressure on the diocesan budget.

“I said two years ago that the last thing I wanted to do was to sell any more churches. We’ve just gone two years and we haven’t sold a church,” including St. Barnabas in Eagle Rock which had closed. The church has been re-opened as “St. Be’s” under the guidance of the Rev. Canon Jaime Edwards-Acton. Taylor said amid applause. 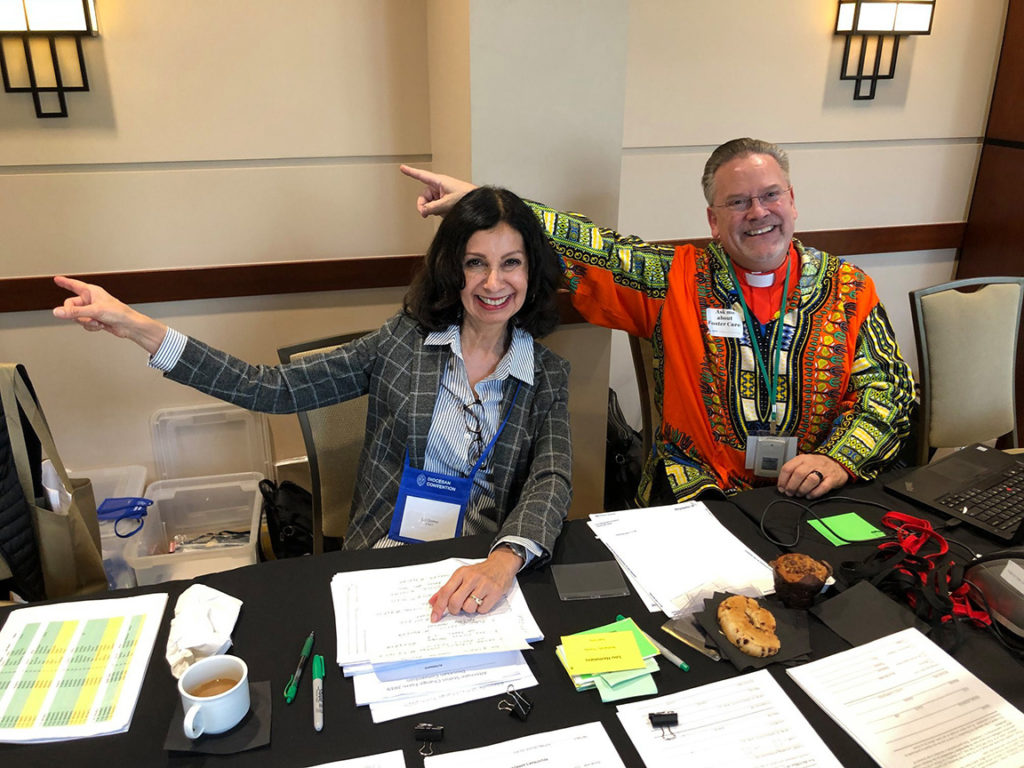 Housing justice, sustainability: ‘I would like us to be there’

A housing justice commission, meeting for the past two years, has concluded that congregations can address the lack of affordable housing issue by attending local planning commission, city council and board of supervisor meetings, Taylor told the gathering. “Because that is where housing justice and density decisions are made.

“I would like us to be there, advocating for the housing insecure,” Taylor told delegates. “You are in your neighborhoods. Start showing up at city council meetings … councils pay attention when people come and hold them accountable.”

He announced creation of a property and projects task force, to aid diocesan congregations and institutions in re-envisioning available real estate for housing projects, “to provide ground lease revenue for the church hosting. This is the essence of sustainability.”

Additionally, ongoing partnerships with Episcopal Community Services are near completion of affordable housing e projects at St. Joseph’s, Buena Park, and Church of the Blessed Sacrament, Placentia, he said.

And lastly, he called the diocese to engage the “Means of Grace” capital campaign, “by which we intend to secure the financial stability of the diocese for the next half century.” Campaign goals totaling an estimated $65 million have been recommended after a feasibility study initially tested a goal of $95 million.

The capital campaign is crucial to avoid continuing to spend money from Corp Sole and the Corporation of the Diocese, he said. The diocese is also attempting to reach salary parity for lay and ordained employees and plans to appoint a task force to address the issue across the board, he said. 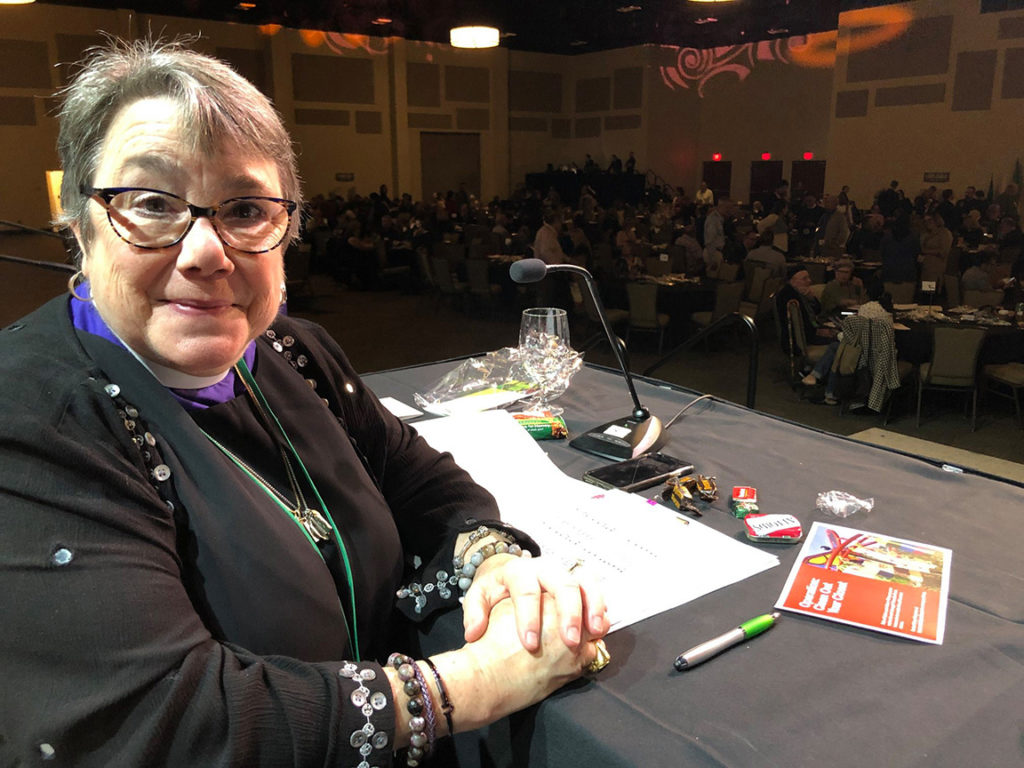 Babies and children also figured prominently in convention addresses and reports.. Linda Allport, diocesan representation for Episcopal Relief and Development described the agency’s “ONE THOUSAND DAYS OF LOVE” campaign to build healthier and more prosperous futures for the world’s children.

The first thousand days are a time of tremendous potential and enormous vulnerability for child development and growth and Episcopal Relief & Development is focusing efforts on better outcomes later by investing in the early nutrition and well-being of expectant mothers and children.

“Every given day there are children waiting for placement,” she said. “In Centinela Hospital [in Inglewood, where her parish, Holy Faith, is located] there are usually 10 newborns ready for discharge every day; there is a huge need for foster parents at this time.”

Along the same lines, Bishop Bruce received applause when sharing her health status — she is 10 years cancer-free — and showing a photo of her first grandson.

In other convention business, delegates elected diocesan officers and clergy and lay deputies for General Convention 2021 (a list of those elected is here), and approved a $4.6 million Mission Share Fund budget.

Treasurer Andy Tomat presented a narrative budget, noting that 26 of the diocese’s 37 mission congregations will receive grants ranging from $4,500 to $88,000. Many of the grants were focused on ensuring each congregation has a vicar, although a substantial number have not received pay increases for many years. 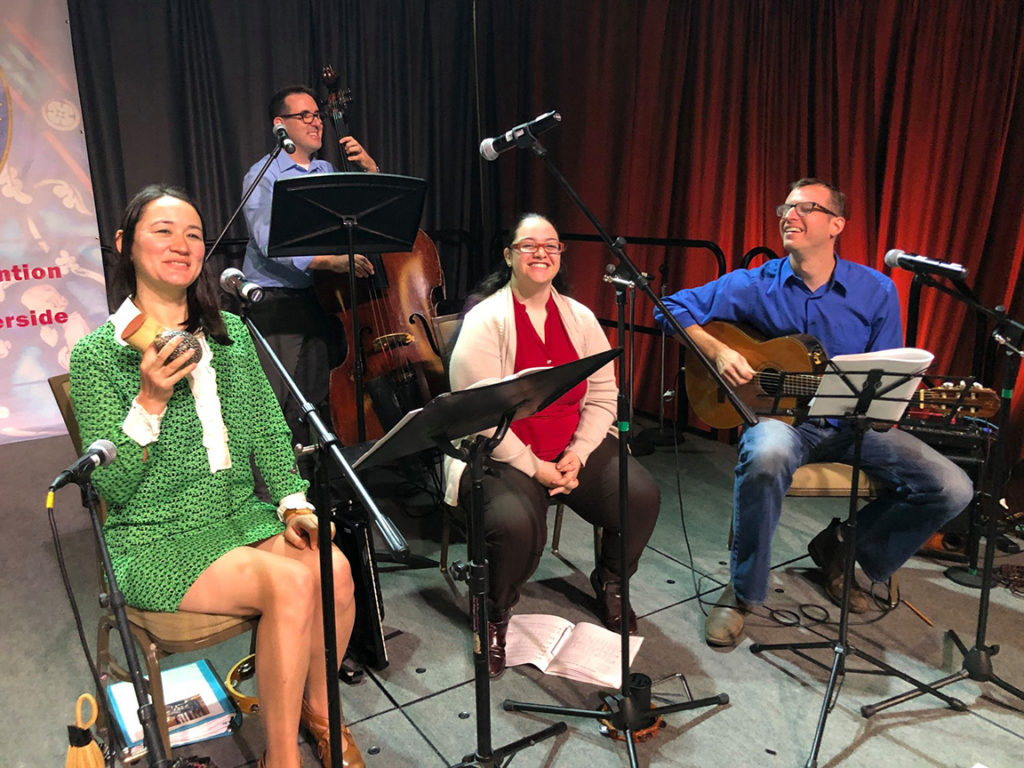 “For 2020 the Program Group on Mission Congregations has asked to increase levels of giving to $827,000 in mission development grants, a 10% increase over 2019,” he said. “In short, it is time to give our mission vicars a raise.”

During the convention dinner Friday evening, Bishop Taylor announced the appointment of two canons of the diocese: Suzanne Edwards Acton of St. Stephen’s, Hollywood, activist for women and the marginalized; and Jim Alexander of St. Andrew’s Church, Ojai, a longtime member of Diocesan Council and many other diocesan boards, who also was elected Friday as a trustee of Diocesan Investment Trust.

Dinner guests also heard from Benjamin Shirley of Street Symphony, who described some of the work done by that organization to bring music, relationships and new hope to residents of Skid Row.

The convention continues on Saturday, Nov. 16. On the agenda is a report from the Committee on Resolutions. Only one resolution, proposing that the diocese continue its commitment to anti-racism efforts, was submitted before convention. The Committee on the Bishop’s Address may also submit additional resolutions in response to Taylor’s and Bruce’s remarks.

After lunch delegates will hear about the work of the Social Enterprise Academy, in which congregations have worked to form plans to use their property and other assets to both serve their communities and generate revenue for their ministries. The convention will vote on which of three finalist teams will be granted funds to help launch its plans.

The Rev. Canon Pat McCaughan is senior correspondent for The Episcopal News and vicar of St. George’s Church, Laguna Hills.