Bojarski, who is currently director of youth programs for the Episcopal Diocese of Kentucky, was nominated for the Camp Stevens position after a national search. She will succeed Peter Bergstrom, who will retire Sept. 1 after 40 years as executive director. 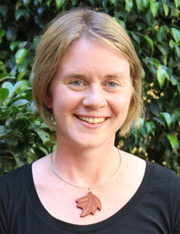 Camp Stevens, located in Julian, California, serves the dioceses of Los Angeles and San Diego with a wide range of year-round camping experiences, from summer camp for children to backpacking trips for teens and family camps, as well as special interest sessions. Its conference center facilities host dozens of church and non-church groups each year.

“Beth brings outstanding gifts and skills to Camp Stevens and its ongoing excellence shepherded so faithfully by Peter Bergstrom,” Bruno said of the appointment. “I greatly appreciate the work of the search team, co-chaired by Canon Larry Sawyer of Los Angeles and Blair Shamel of the Diocese of San Diego. I also thank Bishop Jim Mathes in San Diego for his collaboration in the search process.”

Bojarski has served as an adjunct instructor of recreation, tourism and sports management at Lindsey Wilson College in Columbia, Kentucky; as an outdoor educator for several schools and colleges; and as a development officer and events planner for the Rescue Mission of Syracuse, New York.

Bojarski is particularly interested in environmental stewardship — a longtime priority at Camp Stevens — and is author of To Serve and Guard the Earth, published in 2010 by Church Publishing. She holds a master of theological studies degree from Virginia Theological Seminary and a master of science degree in recreation and leisure studies from the State University of New York College at Cortland, as well as a bachelor’s degree in contemporary ministries from Roberts Wesleyan College in Rochester, New York.

She is married to the Rev. Mitch Bojarski, an Episcopal priest; their son Eliot is three years old.
“Mitch, Eliot and I are delighted to join the Camp Stevens, Diocese of Los Angeles and Diocese of San Diego families, and we look forward to getting to know each,” Bojaski said. “Thank you for your warm welcome, and we’ll see you in August!”
Bojarski will begin her new responsibilities this summer.

The camp will mark its 60th anniversary with a celebration at 1 p.m. on Sunday, Sept. 2. The diocesan community is invited to attend.

Further information is online at www.campstevens.org.