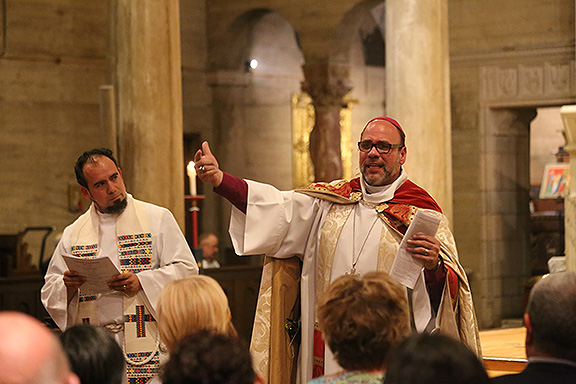 During a recent visit to the Southland, Bishop Rafael Luis Morales Maldonado heralded Los Angeles’ and Puerto Rico’s partnership of “prayer in the Spirit of God” and hinted at possible future collaborations between the two dioceses.

Preaching at St. John’s Cathedral on Sept. 26, he proclaimed Puerto Rico “a diocese of hope” as the U.S. territory continues to recover from one of the worst hurricanes on record just one year ago. One of his greatest joys as bishop, he said, has been representing the diocese “and in the wonderful clergy and lay people who did not fear the work and threw themselves out into the streets in response.”

Through an interpreter, Morales remembered “all the people who died in the face of Hurricane Maria. We know there’s been a lot of controversy about the numbers. I am sure that more than 3,000 people died and it was a huge catastrophe.

Initially, the death toll in the wake of the hurricane was officially estimated at about 64, but later reports placed the number closer to 3,000.
Morales said he found peace in the middle of the storm when he saw the cross still standing at the diocesan center.

Los Angeles Bishop Diocesan John Harvey Taylor said he was deeply moved by Morales’s “passion for the gospel and the way he manifests the light and love of Christ in his interactions with all he meets,” when they met at the College for Bishops, an Episcopal Church program for newly elected or ordained bishops.

After Hurricane Maria struck, Taylor said, he was impressed by Morales’ response. “Almost immediately, he began communicating with the world via Facebook and describing his travels among his 52 churches and other institutions,” Taylor recalled.

“I remember thinking that he’d gone from the College of Bishops straight to a post-graduate degree in advanced bishoping, and he was getting an A+ for the way he pastored and inspired his suffering people,” Taylor said.

“In the aftermath of the worst natural disaster in the island’s history, our government in Washington didn’t make Bishop Morales and those he serves feel at home,” he added. “But way out here in Los Angeles, in Christ, they are our neighbors and siblings forever.”

At the next House of Bishops meeting Taylor invited Morales to visit Los Angeles on the first anniversary of the disaster “to give our dioceses the opportunity to form bonds of friendship and common purpose amid the controversy over the federal response to Maria. He said he wanted to see as much of the breadth and depth of our ministry as possible.”

Visiting L.A.‘in the spirit of truth’

During his Sept. 24 – 27 Southland trip, Morales visited: St. Margaret’s Episcopal School in San Juan Capistrano; Good Samaritan Hospital, Los Angeles; Episcopal Communities & Services (a diocesan-affiliated organization specializing in housing for seniors); Prism Restorative Justice (the diocese’s Los Angeles County jail and hospital ministry), and the Rev. Eric Law’s Kaleidoscope Institute, which promotes innovation and sustainability in churches and other organizations. He also met with the Program Group on Global Partnership, and enjoyed a tour of the Huntington Library and Gardens with docents Sherm and Marge Telleen, members of Church of Our Saviour, San Gabriel.

The Rev. Lorenzo Lebrija, development officer for the Diocese of Los Angeles, accompanied Morales during his visit, which also included a stop at St. Stephen’s Church in Hollywood.

“I love that this wasn’t about a diocese from Province 9 coming to ask for money,” Lebrija said. “This was about a different way of being in communion. Let’s learn from and teach each other.”

“I’ve seen the face of Christ with all the people I’ve had the chance to meet here,” he told the St. John’s gathering. “The face of people with good news here in Los Angeles. This might seem simple, but it’s important. We have to believe it. After that we need to witness to it.”

The dynamic spirit of mission existing in both dioceses means “together we can do amazing things,” he added.

“We have an opportunity to do this work together,” he said. “We must not lose faith. We must not lose focus. We must press forward together.”
Invoking Presiding Bishop Michael Curry’s “Jesus Movement,” he added that the most important thing for the church to do is “to spread the good news of the Gospel because people are hungry for Jesus.”

He encouraged the gathering to evangelize, adding: “The mystery of God can be summed up: Dios es amor, God is love.

“This is the mystery of God. And this love forgives absolutely. It is a perfect love, in Los Angeles and in Puerto Rico. That’s why we in Puerto Rico and Los Angeles need to really prepare ourselves and do this work to reflect this love out there to the other.

“That’s why we need to pray, pray in faith, pray in hope, pray, so that people believe that God has really sent us.”

Taylor said Morales’s ministry, especially in the aftermath of Maria, “was among the bright spots in what by and large has been a dark year for Puerto Rico. For months, the U.S. government suppressed the truth about the death toll. Recovery has been painfully slow. For whatever reason, even though its people are our fellow Americans, Puerto Rico just didn’t matter to our leaders.

Within hours of Maria’s landfall, he was hard at work, sending out regular advisories on Facebook and traveling all over the island among his diocese’s 50 churches — inspecting, comforting, hugging, smiling, drying tears, lifting up, promising to rebuild, and sending people forth into the world with his infectious joy and optimism.

Taylor said he and Morales “are planning my reciprocal visit to Puerto Rico sometime in 2019. “He and I both see the relationship in terms of mutuality and learning.

“We share a passion for evangelism and reconciliation and for lifetime spiritual formation among all orders, lay and ordained. In Christ, all creation, all people, all narratives encounter one another in the spirit of egalitarianism and harmony. Each has something to give, and sacrifice, to the other. So there’s no limit on what we can accomplish together.”

A video of the Sept. 26 service at St. John’s Cathedral is at bit.ly/2NlxVzQ. To learn more about the Diocese of Puerto Rico and its ministries, visit its website at www.episcopalpr.org.