Bookstore is part of her, says manager Mini Hipolito, but it’s time to let it go 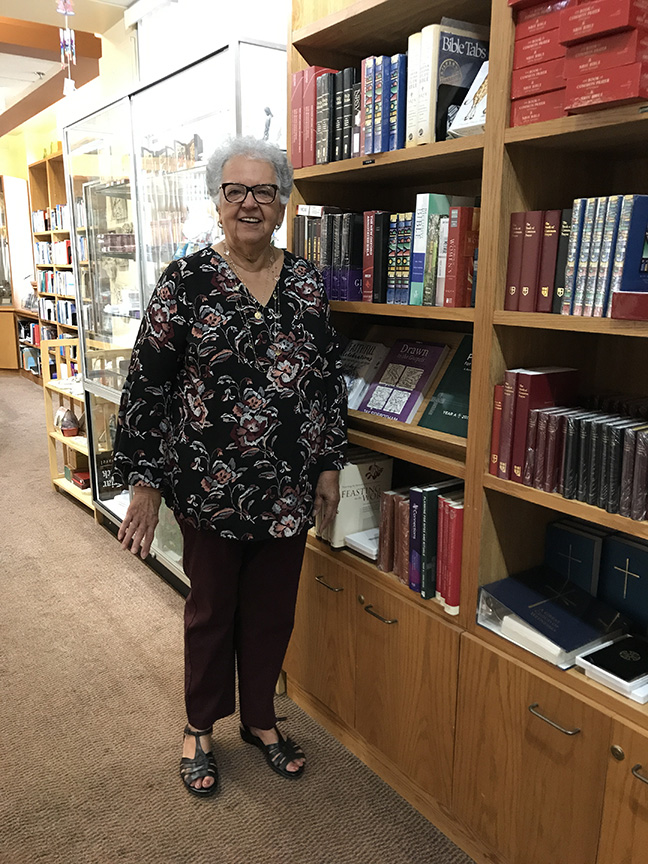 Herminia “Mini” Hipolito poses in the Cathedral Bookstore, which she has managed for more than 30 years. The store will close at the end of December, a victim of online competition. Photo: Janet Kawamoto

HERMINIA “MINI” HIPOLITO PAUSED recently to reflect on her more than three decades of ringing up sales and dishing up motherly advice to laity, bishops and clergy customers at the Cathedral Bookstore at St. Paul’s Commons in Echo Park.

She was readying her traveling bookstore — a mainstay at diocesan conventions, clergy conferences, ECW meetings and, in this case, the Oct. 12 Daughters of the King Fall Assembly at St. Columba’s Church in Camarillo.

Packing boxes of books, jewelry, greeting cards, calendars, confirmation and baptismal certificates, icons and other memorabilia just goes with the territory. “I believe I’ve been to every church in the diocese at one time or another,” said Hipolito.

Officially hired in 1983, she remembers opening the doors a year later with inventory purchased from another bookstore that closed. Bishops have come and gone during her tenure, and there have been lots of other transformations and transitions.

She’s retired and returned to work, and now that the Cathedral Center Bookstore — a casualty of online competition — will officially close at the end of the year, she says, “It’s kind of sad. I’ve always seen the bookstore as part of me. But I realize it’s not me. It’s not mine. It’s never been mine. So, I think I’m okay. I told my kids it’s time to let it go.

“It’s like your kid is grown and wants to move on, and you have to let them do it. That’s how I feel about it. I always saw it as my fifth child.”

Bishop Diocesan John Harvey Taylor said that Hipolito will be very much missed.

“Mini has been a beloved member of our diocesan family for a third of a century, helping people find just the right gift for a loved one, getting clergy and church administrators their last-minute prayer book orders just in the nick of time, and welcoming every customer as an old friend,” said Taylor.

“For her colleagues around St. Paul’s Commons, she’s been a friend and an advisor in need time and time again. We’ll miss her every day.”

“From the time I was in the ordination process, Mini was always there at the bookstore encouraging us,” she recalled. “She always remembered our names! I told her, when the bookstore first opened in Echo Park, when the building was brand new, that she needed a cappuccino maker in there.

“She remembered, and for the next set of interviews I was in, she brought in a package of instant cappuccino mix (remember those?)

“As she made it and handed it to me she made the sound of the milk frothing! It is this attention to detail and her kindnesses in so many ways that I will never forget and always cherish about Mini.”

The Rev. Canon Michael Cunningham remembers what “a really big deal it was to set up the bookstore” and recalled helping out with the traveling bookstore. Mini is one of a kind, irreplaceable, he said.

“I know on one level that Amazon has killed all bookstores, but where we going to get our kitsch now?” he asked. “I’m looking right now at my milagro cross that I bought from Mini that is incredibly beautiful. I have never ever seen another one like it. I’m sure I never will.”

Canon Randy Kimmler, who retired four years ago as diocesan canon missioner for vocations, remembered hiring Mini in 1983. Together, they opened the bookstore. “We were like family,” he said.

In spite of the increasing competitive challenges, he said, “Mini kept the bookstore going all these years and was able to expand it. She started out going to convention and deanery meetings and clergy conferences, and pretty soon people all over the West knew about it, and everybody knew her. And she was going to Arizona and other places with her traveling bookstore.”

Hipolito said she will continue to cherish all the memories. “I’ve had the opportunity to meet so many people who have gone through the bookstore,” she said.

“Archbishops, bishops — I met Cardinal Mahony. Bishop Rusack invited me to take communion. I was asked to be a presenter when Bishop Borsch was consecrated. Even though he knew I was a Roman Catholic, he wanted me to be one of his presenters.”

She added: “I still see them all. In a sense, it’s like seeing kids or nephews or nieces growing up.”

She plans to spend more time with her four children and her grandchildren, to catch up with friends and resume crocheting and other hobbies.

But not just yet. “Don’t forget,” she offers a quick reminder: “We have a 25-percent-off sale right now, so come to the bookstore and check us out.”