According to Bishop Mary Glasspool and members of the Program Group on Ecumenical and Interreligious Life, Kay Lindahl — author, activist, and diocesan lay leader — “was and is a star … clearly a leader in the interfaith movement.” 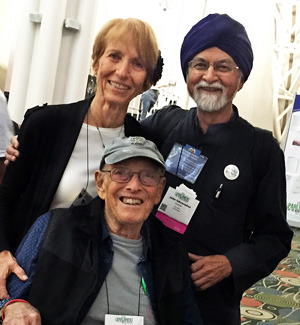 They credit Lindahl, author of The Sacred Art of Listening, for inspiring them, first to attend and then to move beyond the Oct. 15 – 19 Parliament of World’s Religions gathering in Salt Lake City, from contemplation to action (see story beginning on page 8).

“I am infinitely grateful to Kay,” said the Very Rev. Canon Frank Alton, who admits he was initially reluctant to participate in the gathering, fearing a “kumbaya, isn’t-it-great-we’re-all-here-together” atmosphere, but instead experienced personal transformation.

“If she hadn’t pushed it with the program group I’m not sure I’d have gone,” said Alton, provost of the Cathedral Center of St. Paul. “But I had hope because of Kay. Her presence there and in our group was an important part of my journey.”
Lindahl says simply, “I bring my Episcopal self to interfaith work. That’s who I am, when I’m out doing what I do in interfaith and trying to get more people from the Episcopal Church to dip their toes in.”

Currently a parishioner at St. Luke’s Church, in Long Beach, she describes her vocation as “teaching people how to prepare to listen” and her avocation as interfaith activism.

She discovered that passion for interfaith activism more than 25 years ago while living in Laguna Niguel and “working with some local churches, temples and synagogues and communities to make sure the zoning for houses of worship and nonprofits would be carried through when it became incorporated as a city in 1989.
“We met fairly often, we got to know each other and then, when it was over, there was a void. So, I sent out a notice to people, saying, let’s get together and see what it would be.”

What “it” became was the Alliance for Spiritual Community, a grassroots interfaith group committed to transformation through dialogue among people of diverse traditions and spiritual practices.
That led to an invitation to Lindahl in 1993 to the Parliament of the World’s Religion in Chicago — and she has attended “every single one since. I found the first experience so life-transforming, opening, deepening, enriching, that I said anytime they’re going to be do one I’m going to be there” — including 1999 in Cape Town, South Africa, 2004 in Barcelona, and 2009 in Melbourne, Australia.

She is also a member of and has chaired the board of the North American Interfaith Network and has served as a global trustee of the United Religions Initiative. She is one of 85 Parliament ambassadors from 25 countries and hopes to increase the numbers.

Joining the Woman’s Silent Walk for Peace on the Parliament’s first evening, was an extremely powerful moment, Lindahl said. Led by five women from the Philippines, Uganda, Pakistan and Israel, “it was a slow, meditative walk in solidarity with these women who live in places you can’t even imagine. They just started walking; we had no idea how many women were behind us,” Lindahl recalled.

At one point, she looked back to see “hundreds of women” walking silently through the Salt Palace Convention Center in witness to violence against women.

Lindahl is also founder of the Listening Center, which grew out of her book The Sacred Art of Listening, first printed in 2002. She has led local, national and international workshops and retreats to explore and teach a spiritual approach to listening for religious, spiritual, community and business groups, including two presentations made during the recent Parliament.

Her contributions to the Parliament’s process were outstanding, according to Glasspool. “Along with her colleague Kathe Schaaf, Kay suggested the guiding questions: How am I going to take responsibility for restoring our humanity? What do I stand for? What am I willing to surrender? What radical gift have I been called to bring in service of healing our world?”

Alton said the gathering “demonstrated how interfaith work can make a difference and call us to action. I haven’t been to a conference that powerful in a long time. It awakened dormant feelings, motivations, emotions inside me.”

And, although he didn’t hear a lot of new information, what felt transformative was “the way it was said and the context in which it was said. It tapped into those dormant places in ways that other things haven’t.”

Plenaries addressing the status of indigenous people and violence against women revived a passion for social justice, so much so that upon returning he attended a protest at one of the supermarkets near his congregation’s Echo Park neighborhood, he said.

“They’ve had bad contracts and low salaries, no sick days or vacation time, etc. We went and had a prayer litany in the produce section, standing in a circle. The manager stood there with us, trying to talk with us and we just kept praying. Those kinds of experiences I want to have more of; they make a difference.”
The program group is going to meet to talk about a way forward, Lindahl said. She encouraged follow-through by visiting the Parliament website and signing up for their newsletter.

Getting involved and staying informed is important she said, adding that understanding and awareness need to keep pace with the growth of religious diversity in Southland neighborhoods and communities. “It’s all about being compassionate with our neighbors who may not look like us,” she said.

“For me spiritually it’s so enriching to find out about how other people worship and how other people view God, the Supreme Power, whatever they call God. It just opens up my whole realm of experience spiritually and it also makes you look at your own faith more,” she said. “I’ve done more delving into Christianity and the Episcopal Church’s version of Christianity since I became involved in interfaith work.”