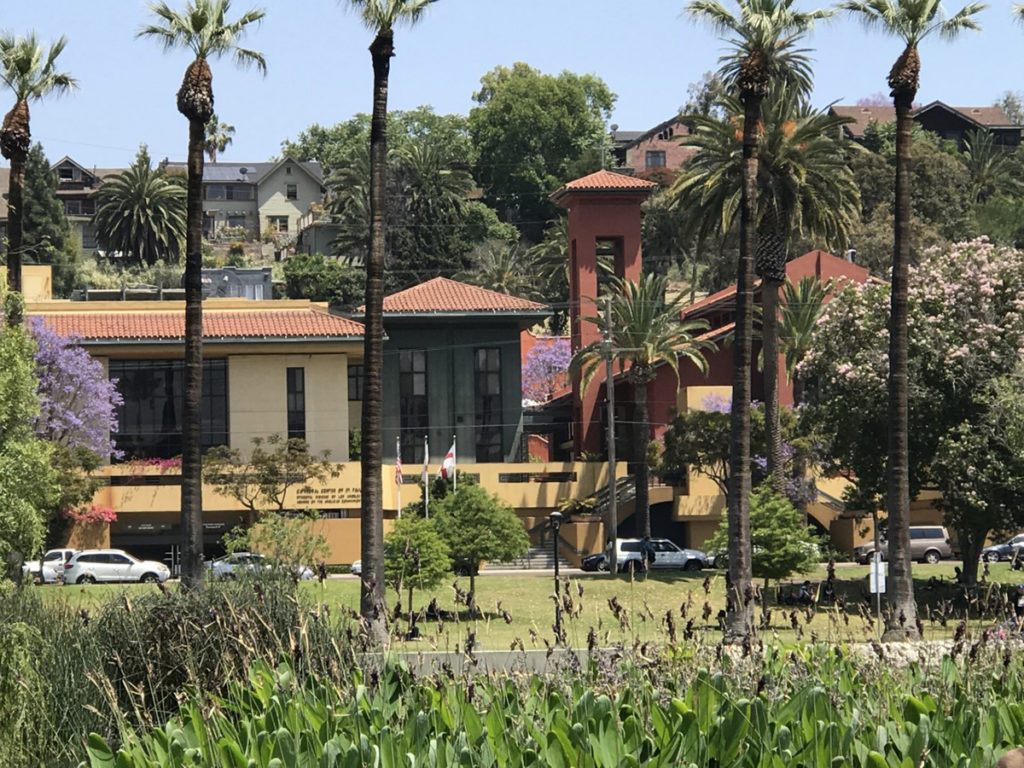 The Cathedral Center of St. Paul, soon to be renamed St. Paul’s Commons, photographed from the far side of Echo Park Lake. Photo / Janet Kawamoto

Following more than a year of conversation and discernment, Taylor said, the Bishops’ Office, Diocesan Center, Ministry Center, and Retreat and Conference Center will continue in Echo Park under the new name of St. Paul’s Commons, so designated to honor the diocese’s previous St. Paul’s Cathedral, active from 1883 to 1980 and continued in 1994 as the Cathedral Center of St. Paul.

“The change to St. Paul’s Commons will, we trust, further energize two other beloved institutions,” Taylor wrote in a May 2 message to clergy and lay leaders. “St. Athanasius Church will again have a space that is entirely its own. As we spruce up the whole complex with new carpet, paint, and signage, we plan a concerted effort to draw attention to the congregation’s presence so that more people have the opportunity to enjoy its abundant ministries.”

Taylor added: “St. John’s Cathedral also enters an exciting time of visioning about its role as a diocesan and civic institution in the heart of one of the greatest cities on earth. St. John’s neighborhood, which actually is our whole diocese, is a harbinger of Christ’s church’s multicultural, pluralistic, socially progressive destiny — if the church is to survive and thrive, that is.”

The cathedral’s “vision, as well as its more pressing needs such as a seismic retrofit, will be centerpieces of our diocesan capital campaign,” Taylor said. Completed in 1925, St. John’s landmark church stands at 514 W. Adams Blvd. near the University of Southern California.

Heightened community awareness is also key for St. Athanasius, which dates from 1864 as the oldest continually operating Protestant house of worship in Southern California. The congregation has worshiped on the Echo Park Avenue site for a century, another milestone to be marked this year. The congregation’s current priest, the Very Rev. Frank Alton, will continue as provost of St. Paul’s Commons.

Celebration of these anniversaries and new ministries will kick off on Tuesday morning, Oct. 22, the date on which diocesan headquarters first opened 25 years earlier at 840 Echo Park Avenue. Details will be publicized, and as plans take shape a date will be selected for moving the historic cathedra, or diocesan bishop’s chair, together with the bishop suffragan’s official chair, to St. John’s. Both were hand-carved for the 1924 opening of St. Paul’s Cathedral.

Taylor said St. Paul’s Commons’ ministries on-site will continue to serve neighbors “grappling with food and housing insecurity” while also drawing “more attention to our beautiful, underutilized retreat center and all our public spaces, which are available to community organizations available for lease (in the name of sustainability) and sometimes for free.”

Both St. Paul’s Commons and St. Athanasius Church will continue as “a center of great hospitality and service,” the complex’s original mission voiced by then-Bishop Fred Borsch.