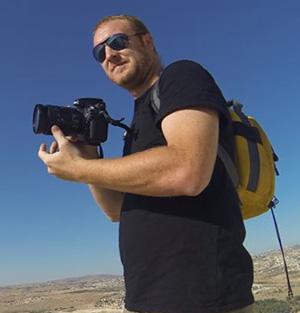 Chris Tumilty is pictured in the Holy Land, where he has led several youth and young adult pilgrimages for the Diocese of Los Angeles.

“Chris’ particular area of expertise is online, digital, and video communications, and we are very excited about the skills and ideas he brings to us,” Brown Snook wrote in her announcement. “As a lifelong Episcopalian, Chris is passionate about Christ’s mission through the Episcopal Church, and I look forward to bringing his skills to our diocese.”

“It’s been a joy and blessing to work with Chris during the two and a half years since I arrived in Echo Park,” said Bishop Diocesan John Harvey Taylor. “His devoted ministry with young people, skill with social media and web design, and creative gifts as a filmmaker have all been boons to our diocese. I give thanks that he will still be nearby, inevitably playing a role as our collaborations continue and deepen with the Diocese of San Diego.”

Tumilty is currently a communication specialist for the Los Angeles diocese, and previously served as missioner for youth and young adult ministry. In his youth ministries role he organized and led several pilgrimages to the Holy Land and founded the popular “Versed” series of conversations between youth adults and the bishops of the diocese. His communications work centered on video production, including the “Just Action” video series and numerous other projects. He also was instrumental in designing components of the diocesan websites, and has photographed many diocesan events.

Tumilty holds a bachelor’s degree in journalism from Point Loma Nazarene University and a master’s degree in strategic communications from National University. He began his career with the Diocese of Los Angeles in 2007 and has spent the last 12 years working on a full range of communications campaigns. Tumilty will begin his new position with the Diocese of San Diego on Feb. 1.