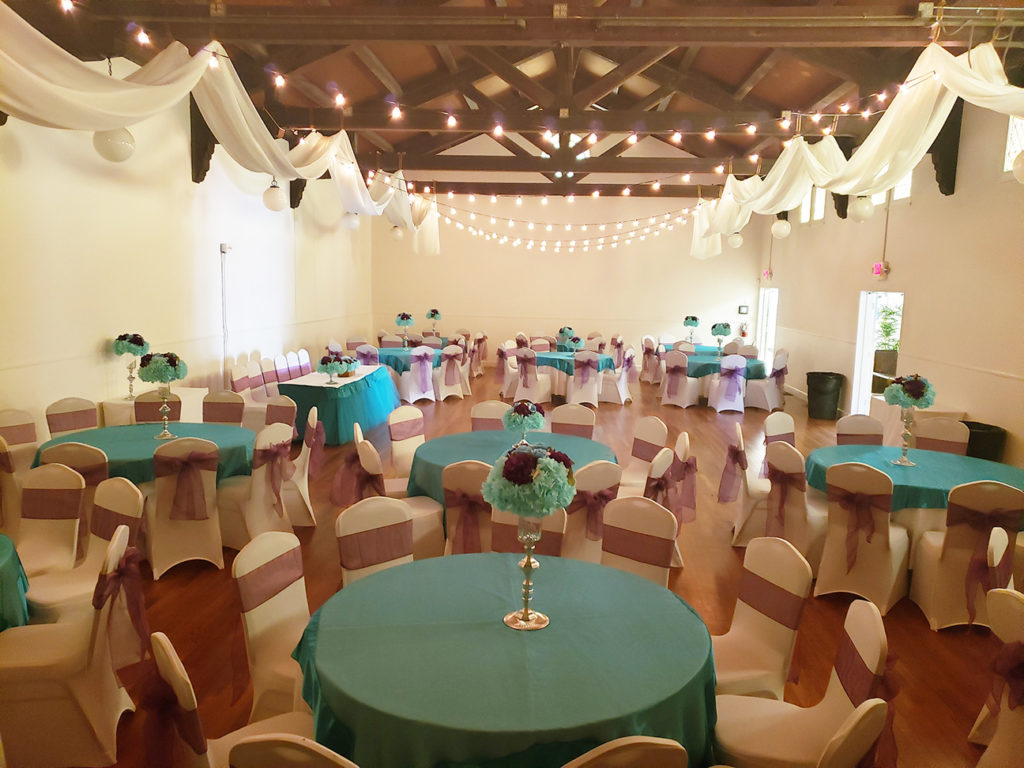 With a loan from the credit union, St. Paul’s Church, Pomona, renovated its facilities. Here the upgraded parish hall is decked for a quinceañera.

A LOAN FROM THE EPISCOPAL COMMUNITY FEDERAL CREDIT UNION helped transform St. Paul’s aging facilities in Pomona into an elegant venue for weddings, quinceañeras and other cultural and community events.

“We had been racking our brains; we were operating out of a deficit and trying to reduce it by doing everything we could,” according to the Rev. Mark Hallahan, St. Paul’s rector.

“We tried to figure out how to get money. We thought of planning capital campaigns. We had one of those big thermometers in the church, indicating that we were going to raise so much by 2020, but it just wasn’t happening.”

A chance conversation with Dan Valdez, credit union board chair, helped the 135-year-old congregation reimagine and reinvigorate itself.

“Dan said, ‘You have an amazing venue. Your campus is going to be your selling point, your salvation, in a way.’ He said, ‘You know you can get a loan from the credit union.’ That was news to me,” Hallahan recalled.

Unfortunately, far too few Episcopal clergy and laity are aware of the range and depth of services offered by the credit union, not just to congregations but also to individuals, according to Urla Gomes, manager and chief executive officer.

Organized with 500 accounts in the wake of the 1992 Los Angeles riots, the credit union’s membership soared to 1,500, but in recent years has declined slightly to about 1,254, with current assets of about $5.6 million.

Streamlining costs and operating with a low profit margin helped keep the diocesan institution afloat in tough economic times. According to the National Credit Union Association, at least eight credit unions failed in 2018, a continuing trend since the financial market collapse of 2007.

“So many small credit unions have gone out of business because of the economy,” Gomes told The Episcopal News. The credit union depends on interest from loans and investments to survive, she said.

Serving communities locally and throughout the nation, it offers checking account, ATM and shared branching benefits, allowing members greater flexibility, but at increased expense to the credit union.

Additionally, federal regulations require that credit unions maintain a seven percent capital reserve for every dollar on deposit, “which means you have to have that amount of money available. We are barely at 7.84 percent, which means you really don’t have the ability to do upgrades,” Gomes said.

With about 260 loans currently, Gomes said the organization opens an average of six new accounts per month, “but we should be doing more. We are really encouraging Episcopalians to open accounts with us.

“We are encouraging churches and priests to let people know we’re here. If you need to refinance cars, get better rates, we do all of that. Now we want our priests to help us move it in the further direction.” 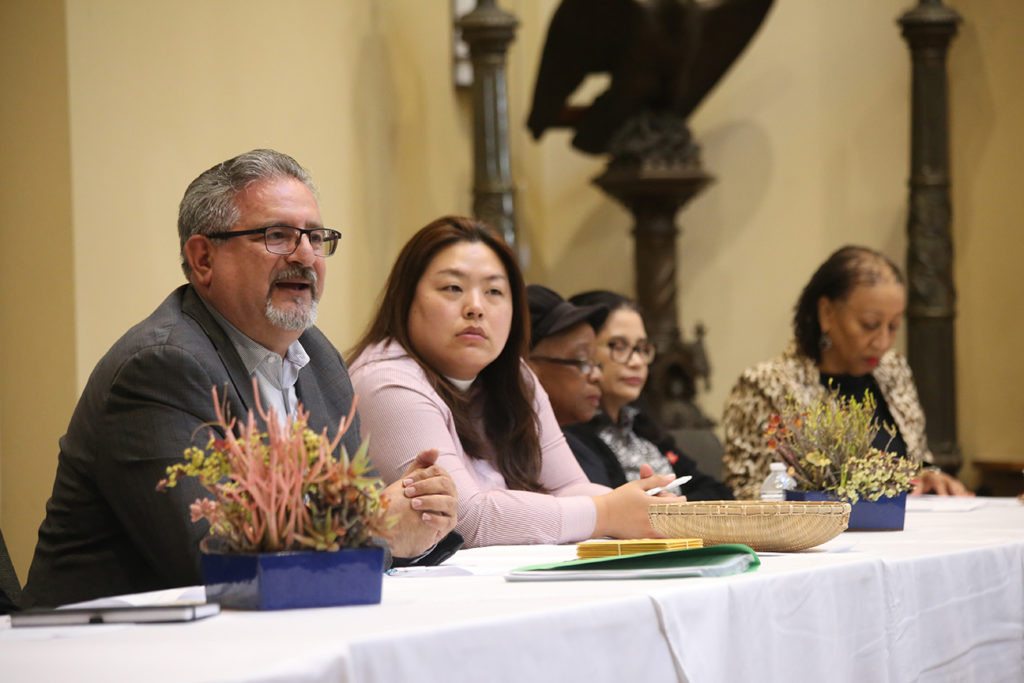 As an economic justice ministry of the diocese, about 89 percent of the credit union’s loans go to low-income individuals and represent small amounts of money, Gomes said.

Like the $125 loan made to a recently homeless person to help purchase clothes to wear to a new job. “No other institution was going to lend someone $125 to buy clothes, but we did,” Gomes said.

Eventually, that same person needed a car for transportation to and from work and “we are working on that part of it,” she said.

Valdez said, “Because we’re designated a low-income credit union, we have a little more latitude in terms of how we can work with our members to help them manage their financial life.”

That frequently means taking a chance and investing in the community by extending credit to those who would be turned away elsewhere.

Like a person recently paroled from prison who also needed an auto loan. Or those caught in the vicious payday lending cycle, who typically pay a 30 percent interest rate, plus fees and other charges.

“We have taken over their loans at an interest rate of 12 to 15 percent and they’ve saved so much money,” Gomes said.

Services extend beyond assisting people with debt relief; financial literacy and counseling aid also are available. “The credit union is doing the work it was set up to do, to serve the underserved, to help people less fortunate,” Gomes said.

It also aids institutions and churches, like St. Paul’s, Pomona, offering loans up to a maximum of $49,999. Only about 3 percent of loan applications are declined yearly.

“We have done a lot of roof replacements, parking lots done, halls done so they can have quinceañeras, putting air conditioning in churches so that when they worship they worship in a place that’s comfortable,” Gomes said.

Powerful though small, the credit union has a staff of four, including two full-time employees. Gomes is hoping to garner new accounts and to win a grant to upgrade computer systems.

“What we really want to do is to try to show people that they have an institution they can come to, rather than going to the local liquor store to cash their paycheck and to immediately give away a couple of points of their take home pay just for the convenience of being able to convert that paper check to cash,” she said.

He said the credit union wants not just clergy, but congregations also to consider it for auto and other unsecured loans.

“Our interest rates are low in comparison to mainstream financial institutions. Our threshold for approving loans is a lot less and the more loans we make, the more income we make off the interest and in turn, can loan more money to folks who don’t traditionally have accessibility.”

Holy Faith Church in Inglewood applied for a loan in March 2019 to consolidate credit card debt, according to vestry co-chair Julie Brown.

“We’ve had some financial strain with limited tithing and quite a bit of credit card debt we wanted to consolidate,” Brown recalled. “We didn’t think we would qualify. It was worrisome, because we wanted to continue the good work we were doing.”

The $49,000 loan “helped pay off almost all of our credit card debt,” she said. “It was a huge savings because we were paying 25 percent interest and were able to get a much lower rate with the credit union. We were able to take that money and get our employees’ pensions up to date, which was very important to us.”

The loan enabled the church “not to use the credit cards,” she said. “We’ve been much more solvent. Our goal is … to pay off all of our bills each month as needed. The credit union has been really a godsend.”

Brown, executive director for Holy Family Adoption & Foster Care Services, an institution of the diocese, said the credit union also helped that agency secure a loan to remain solvent when it transitioned from the Catholic Church to the Episcopal Diocese of Los Angeles. “They were phenomenal to us,” she said.

Hallahan, along with St. Paul’s vestry member and treasurer Roberto Muñoz, said their $49,999 loan helped spruce up the church hall, install air conditioning and a catering kitchen. Aided by a new office manager/event planner it has helped “turn us into a pretty good-looking, more-classy-than-before wedding venue and event venue.”

“One of the major things, and the costliest things to get done, was getting the air conditioning in order,” he said. “We’re in Pomona where it can get to 100 easily and if you’re a bride you do not want to be in a room that’s not cool.”

The campus facelift, added revenue and increased traffic have reinvigorated the congregation, Muñoz said. “We have nine or 10 events planned for this year. That’s an 80 percent increase from last year and we wouldn’t have been able to do that without the loan to get things fixed up.”

Hallahan said the venue has a new website, competitive pricing, “and we now send people to wedding expos. We have a table there and a slide show. We’re classy enough to be competitive. We figure within a couple of years it will get us out of our debt.”

Muñoz said the loan has given the church leaders a whole new attitude about handling money. “We have a beautiful old church and much needs to be done. We are very, very grateful to have the ability to go to the credit union.”

Hallahan agreed. “It gave us a huge step up. We were wallowing and this brought us up to a level where we could begin to start making things happen.”

To learn more about the credit union and its services, click here.