Diocesan Convention 2020 – virtual, but in the ‘spirit of family reunion’ 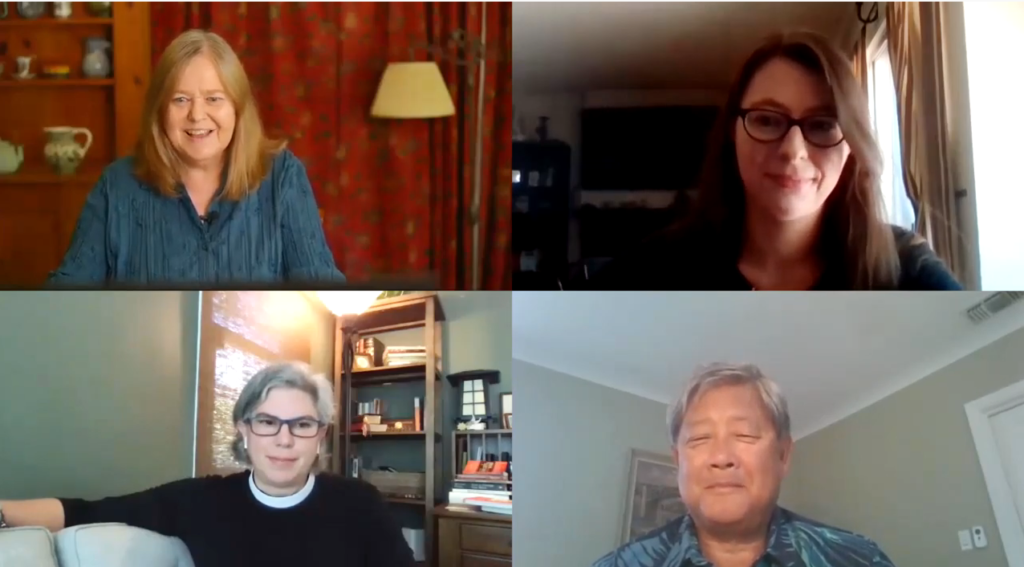 Click the image above for a video interview with Secretary of Convention Steven Nishibayashi, Convention Coordinator Samantha Wylie and Canon to the Ordinary Melissa McCarthy concerning convention plans — the first in the new “Zoom with the News” series.

Delegates and visitors anticipating the Nov. 13 – 14 annual meeting of the Diocese of Los Angeles as a big family reunion in Riverside may instead – in the age of the COVID-19 pandemic —experience it as much smaller socially distanced gatherings in local deaneries or their own congregations. Or, at home, by themselves, but with spirit.

“This will be our first entirely virtual convention,” Canon Steve Nishibayashi, secretary of convention, told The Episcopal News recently. But, he added, “perhaps there will be some opportunities for, or necessity for, small gatherings so that people can be at places that have better wi-fi.”

Planning for Diocesan Convention, themed “Servants of the Spirit,” has presented a host of novel technical and other logistical challenges as Nishibayashi and Samantha Wylie, convention coordinator, strive to make the 125th annual meeting as safe and as efficient as possible.

“The bishop’s priority is to try and maintain a sense of community and reunion, and that we’re bigger than any of our individual congregations,” Nishibayashi said. “But health and safety are foremost this year.”

Wylie agreed. “I love convention. It’s this big family reunion. We are trying our best to achieve that, given that everything’s purely virtual. Our number one priority is health and safety, and getting all the business done, making sure everything is conducted in accordance with the canons.

Diocesan Bishop John Harvey Taylor said there will be fellowship, even across the digital divide. “Our challenge and opportunity for convention is the same as with all our ministries during the pandemic,” he said. “In a time of crisis and separation, we’ll hold fast to the peace and unity of Christ so we can continue to do the church’s work of glorifying God and serving God’s people. We’ll do our essential business, enjoy fellowship even across the digital divide, and once again give everyone news and tools they can use in their vocations and ministries.”

While some logistics and details are still being planned, Nishibayashi said he will update congregations and convention participants as the information becomes available.

A video interview with Nishibayashi, Wylie and Canon to the Ordinary Melissa McCarthy concerning convention plans — the first in the new “Zoom with the News” series — is here.

Here is what convention will look like so far:

Pre-convention deanery meetings typically offer a preview of the diocesan budget, resolutions to be considered, question-and-answer sessions and expectations for the two-day gathering that draws thousands of delegates, guests, visitors and exhibitors. The deanery meetings likely will be virtual as well.

“As this is all new, we are asking the deans and deanery representatives to Diocesan Council to provide input and suggestions about the structure of the pre-convention deanery gatherings and the days of convention itself,” Nishibayashi said in his July 10, 2020 Convention Notes.

“We recognize that restrictions on the size of gatherings may change. Also, reliable internet and cell service will be essential.”

Timely submission of current information will be critical, Nishibayashi said. The current schedule for pre-convention deanery meetings, forms for lay delegates and alternates and clergy delegates, and nominations to elective office are available and may be submitted through online forms available here.

Wylie said congregations have until Nov. 3, or ten days before convention begins, to update those forms, in accordance with diocesan canons.

While logistics are still fluid, pre-registration will most likely happen Thursday, Nov. 12, the day before the start of convention. More information about the convention start time will be available later.

Registration “is a work in progress,” Wylie said. “It is important we get a quorum counted so we can do everything canonically that we need to do.” To constitute a quorum, at least one-third of lay delegates and one-third of clergy delegates eligible to vote will need to be present.

“We are trying to come up with a way to register in advance, which is different than counting everyone showing up,” she said. “I am doing mental gymnastics — how do I make sure I have enough time to count everyone who is showing up?”

“There are plenty of people who’ve expressed an interest in making presentations; what the topics will be and how they’re done is still to be worked out,” Nishibayashi said.

Offering workshops via online webinars is economic justice, he said, “because people don’t have to travel and spend money on hotels to participate.”

Imagine them instead inside the Great Hall at St. Paul’s Commons in Echo Park — appropriately socially distanced — for what this year will be “convention central.”

“My vision is to use the Great Hall as a nerve center,” although details are still being finalized, Nishibayashi said.

Participants will be able to access the live-streamed convention on their computers, added Nishibayashi, who said he has received a lot of technical support questions.

“People will be able to use laptops and PC’s. You don’t have to have a smartphone,” he said. Regarding Internet accessibility, he is hoping the deans of the ten geographic deaneries will collaborate with convention staff to ensure accessibility for everyone.

However, he doubts that there will be any way to share devices. “I suspect that each voting person will have to have their own device so that they can be tracked.”

Voting at a virtual convention

As always, delegates will vote for a range of diocesan officers, from directors at the Canterbury university chaplaincy ministries in Irvine, USC and Westwood (UCLA) to the Corporation of the Diocese, Commission on Ministry, Diocesan Council and Hillsides director. A complete list of open offices, along with nomination forms, is located on the diocesan convention website here.

Voting will be carried out using the system that has become familiar to delegates at the past two conventions, according to Wylie. Delegates and clergy will be able to use any internet-capable device — smartphone, computer or tablet — to log into a secure, password-protected website to cast their votes.

“What we’ve learned from electronic voting the last two years is it allows us to be more efficient and productive,” Nishibayashi said. “We don’t have to wait for pencils to be sharpened, or Scantrons to be passed out. And, of course, how much more quickly we can get results back.”

Delegates, guests and visitors who loved shopping at commercial booths like African Team Ministries or Bethlehem Handicrafts, and visiting diocesan-related ministries exhibits like Union of Black Episcopalians, Prism, the Episcopal Community Federal Credit Union and others will be relieved to know Wylie is planning a virtual exhibit hall.

“We will offer space on the convention website for all the visitors who’ve supported us in the past,” she said. She envisions providing a “free of charge as a thank-you” exhibit for commercial and other vendors who have supported convention in the past. “It will be a gallery of pictures, and a link to their websites” where participants can shop or receive additional information.

Planning continues for the form that worship and other longstanding traditions will take. Under consideration are ways to incorporate youth, and how to pass the Parkers (donation buckets) for contributions to Episcopal Relief and Development, the Episcopal Church’s disaster relief agency.

The Parkers are named in memory of and homage to the Rev. Canon Richard and Canon Margaret Parker, who served the diocese for 52 years, and 70 years respectively. Parker spent 42 of those years as rector of St. Cross Church, Hermosa Beach, and was a longtime diocesan coordinator for the Presiding Bishop’s Fund for World Relief, now Episcopal Relief & Development. Margaret Parker, who died in 2007 at age 93, served alongside him and continued her ministry after his death. A memorial lecture, delivered at convention in alternate years, was established in 2008 in homage to her dedication to social justice and women’s equality. The most recent Parker lecture was delivered in 2019 by labor activist Dolores Huerta.

‘We’re all in this together’

As they prepare for the meeting in this unprecedented time, Nishibayashi and Wylie have consulted with other dioceses that are already offering virtual conventions.

“This has been a mind-expanding stretch for us,” Nishibayashi said. “Lots of dioceses have done virtual conventions for a few years — some of the geographically sparse and diverse dioceses, for whom an in-person convention would be a huge travel inconvenience for lots of people.

“There are all kinds of ways to do convention,” he added. “Some diocese even do a one-day one year and a two-day convention every other year.”

Wylie estimated the diocese will save “upwards of $50,000” by hosting the convention virtually “because we’re not renting a facility, hotel rooms, audiovisual equipment; it’s going to upwards of $50,000 in savings.”

Working with the Riverside Convention Center has been “lovely and they have basically allowed us to roll over everything to 2021 without our suffering any penalties,” she said. “There’s a real sense that ‘we’re all in this together.'”

The Episcopal News will publish updates on convention plans in coming weeks.