Dolls, sunglasses and smiles are Upland students’ gifts to children at Haitian school

Students at St. Mark’s School, Upland, are making it their business to send smiles to their counterparts in Haiti. 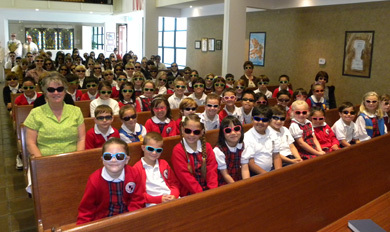 Students and teachers at St. Mark’s Episcopal School in Upland model sunglasses they collected for the children of their companion school, St. Andre, Trianon, in Haiti. Photo: Mike Brown

The students, preschool through eighth grade, have collected more than 350 pairs of sunglasses and some 200 hand-knitted duduzu (comfort) dolls destined for students at their sister school, St. Andre, Trianon, in earthquake-torn Haiti. A group of eight from the church and school left June 9 for a seven-day visit, carrying the students’ gifts with them.

In addition to the dolls and sunglasses, the travelers are also taking gifts of school supplies and hundreds of kazoos – “just for fun,” says the Rev. Keith Yamamoto, who was installed as rector of St. Mark’s on June 6.

The duduzu dolls were created by dozens of knitters from all over California. The sunglasses are intended to protect the young people’s eyes from the sun during Haiti’s long summer months.

The travelers will be led by Serena Beeks, who is executive for schools for the Diocese of Los Angeles and a former head of school at St. Mark’s. She has had close ties with Haiti for many years, and estimates that she has made the trip there some 22 times in the past. 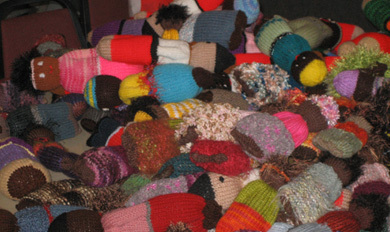 Duduzu (comfort) dolls hand-crafted by knitters all over California are ready to be taken to Haitian children traumatized by the January earthquake. Photo: Denise Gideon

One of the travelers is Denise Gideon who helped make more than a dozen dolls and will teach a knitting class at the needlework center at Zanmi Lasante. “It is a chance to be aware of the broader community and also appreciate what each person can do to make a difference,” she said. Zanmi Lasante provides a number of similar classes that help adults learn skills that will lead to economic self-sufficiency.

In addition to St. Andre, the travel group’s itinerary includes worship at two rural Episcopal churches and visits to the site of the cathedral in Port-au-Prince, which was destroyed in the earthquake, and the Zanmi Lasante (Partners in Health) complex in Cange.

At St. Andre, they will be present for the razing of the oldest classroom building which was irreparably damaged in the earthquake, and will visit the relatively new and undamaged four-classroom building that was completed with the support of St. Mark’s students over several years.

The travelers will also visit the famous iron artisans’ workshops in Croix-des-Bouquets, where Beeks hopes they “will gain a sense of the enormous creativity and resilience of the Haitian spirit, even in the face of such overwhelming disasters as the recent earthquake.”