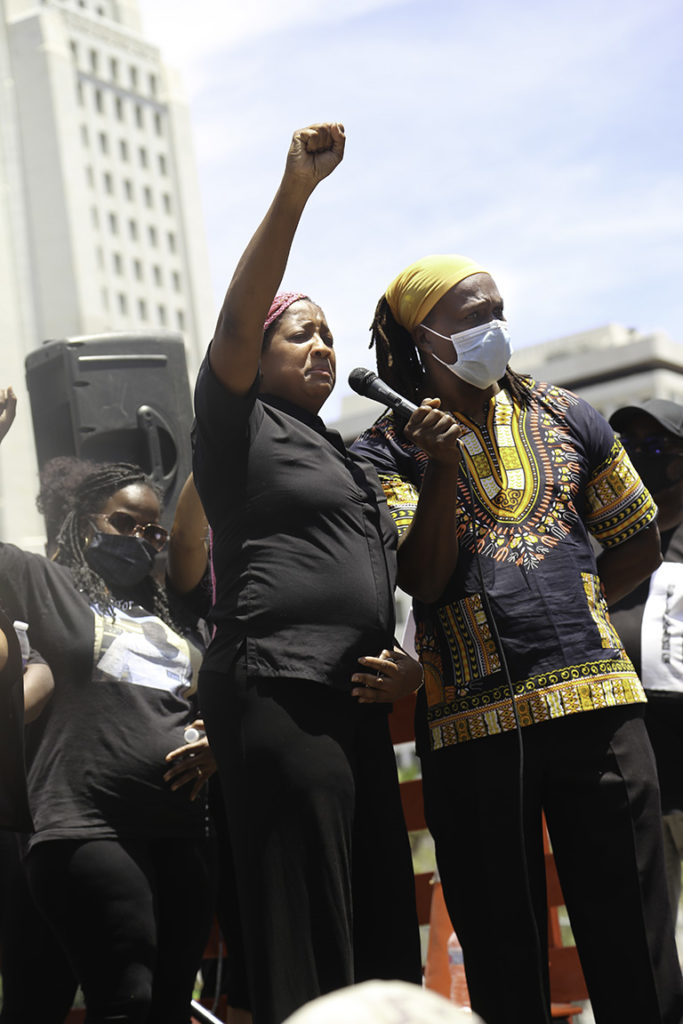 At the June 8 rally, Najuma Smith Pollard, assisted by Stephe “Cue” Jn-Marie, asks mothers at the June 8 rally to remember that George Floyd called out for his recently deceased mother as he died. Photo: Janet Kawamoto

Protesters were gathered in downtown Los Angeles June 8 to mourn George Floyd, but the well-known details of his death under the knee of a Minneapolis police officer were magnified when men and women stepped up to microphones mounted on a red flatbed truck and told stories of their own relatives whose lives were ended in violent encounters with police.

The rally was sponsored by Black Lives Matter – Los Angeles (BLMLA) and CLUE (Clergy and Laity United for Justice and Peace), along with a large number of other religious and civic organizations, including Sacred Resistance, the justice ministry of the Diocese of Los Angeles.

Organizers intended to call attention to American police departments that disproportionately target people of color. Speaker after speaker outlined of the historic mistreatment of African Americans and what they called the racist culture of Los Angeles-area police.

Bishop John Harvey Taylor of the Diocese of Los Angeles and several Episcopal priests were among the dozens of clergy of many faiths — Christian, Muslim, Jewish and others — who attended the rally, along with some 3,000 other people who endured near-90 degree heat to call for equality and respect for Black residents. Almost all of the protesters were masked against the threat of coronavirus infection, but social distancing was nearly impossible.

Many participants bore the kind of signs that have become familiar in current news reports: 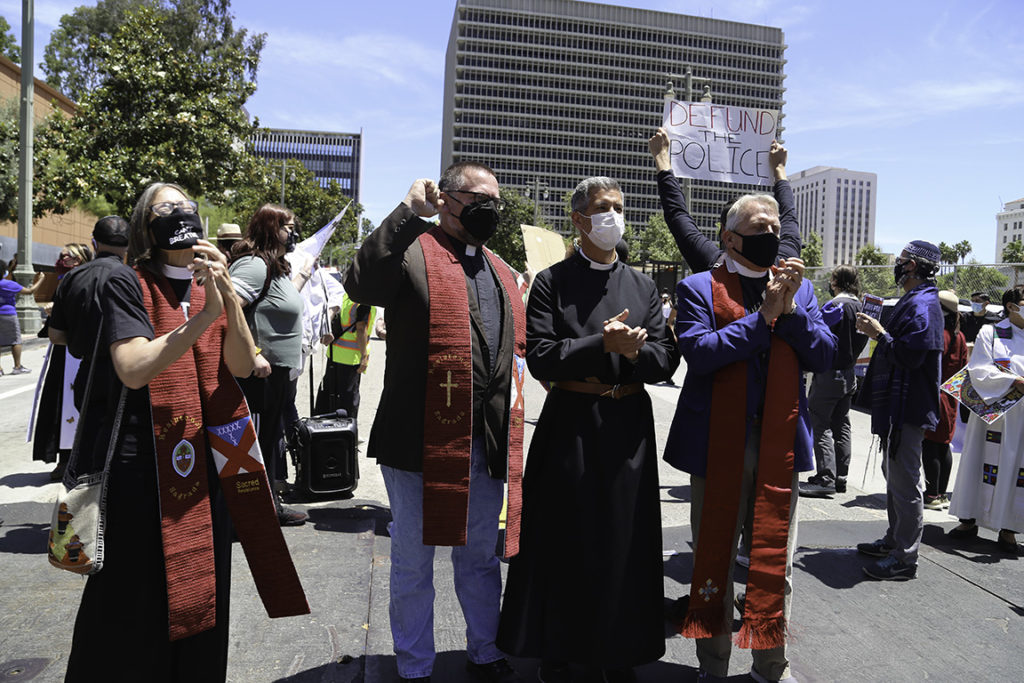 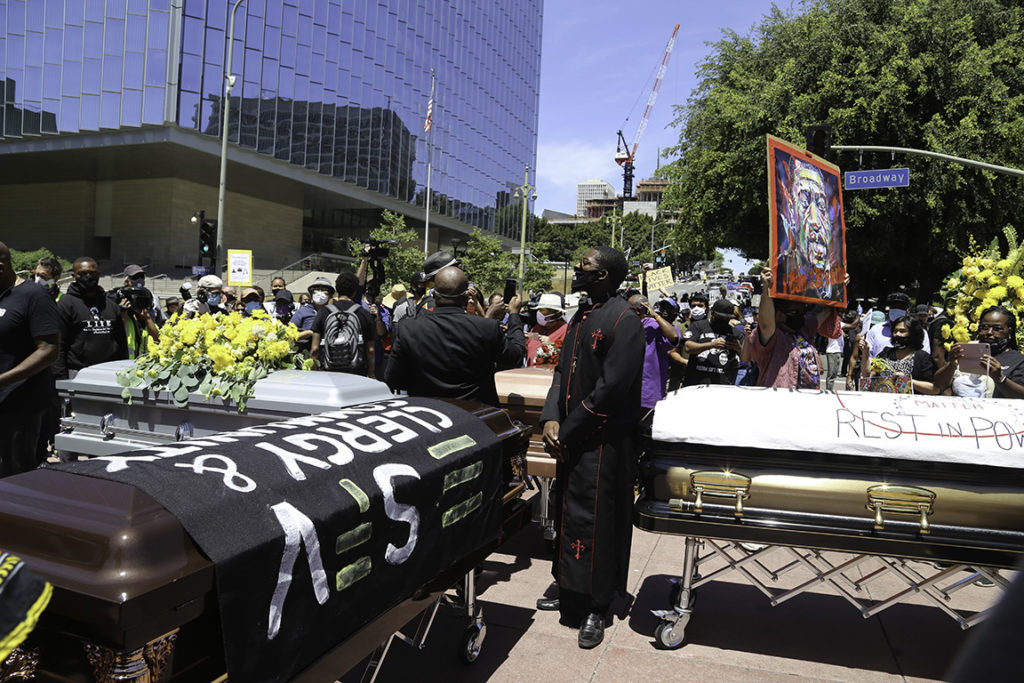 Rally organizers brought together several coffins and placed them in the middle of the intersection of First Street and Broadway to form a cross representing Black and Latino victims of police violence. Posters showed the faces of men and women who had died in police custody.

Early in the rally, a cadre of sheriff’s deputies in large SUVs drew close to the intersection, triggering fears that they intended to act against the protesters. Pastor Stephe “Cue” Jn-Marie of the Row Church, a Skid Row ministry, who served as emcee for the rally, asked the white clergy to stand between the deputies and the demonstrators — a live demonstration, he said, of white privilege.

Whether to avoid confrontation with a long line of clergy — what Taylor called an “impromptu security squad” —or because they did not see the demonstrators as a threat, the deputies soon moved their vehicles and personnel about 50 feet away from the intersection, drawing cheers of appreciation from the rally. 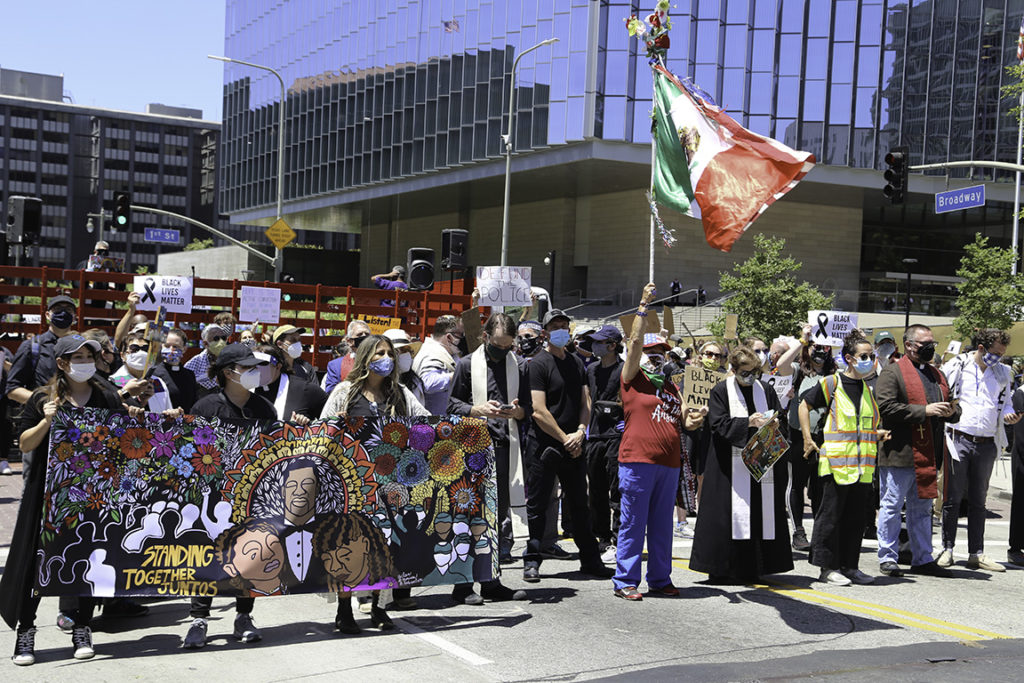 At a June 8 Black Lives Matter rally in honor of George Floyd, white clergy of many faiths and denominations line up between protesters and sheriff’s deputies. The officers, who had established themselves close to the protesters, but made no overt moves toward interfering with them, soon took up a new position at a non-threatening distance. Photo: Janet Kawamoto

“Defund the police,” demonstrators chanted, referring to recent calls for policing to be reformed so that many of the situations now handled by armed officers — homelessness, domestic incidents, mental health issues — might draw a response from social service workers specially trained to calm matters without lethal force. Armed officers, in this model, would be called in only in cases of actual crime, would not have military-style equipment, and would be better prepared to work with a widely diverse population.

“It was good to see the broad support from across the area and diocese and how ecumenical and interreligious the gathering was,” said the Rev. Greg Kimura, rector of St. Andrew’s Church, Ojai, and co-chair of Sacred Resistance. “The highlight for me was the [parents] sharing their heart-wrenching stories of losing their children to violence. My prayers will continue to go out for them.”

The Rev. Jane Gould, rector of St. Luke’s Church, Long Beach, was also present, along with the Rev. Jaime Edwards-Acton, rector of St. Stephen’s Church, Hollywood, priest-in-charge of St. Be’s (St. Barnabas’ Church) in Eagle Rock, and Sacred Resistance co-chair; and the Rev. Thomas Carey, vicar of Church of the Epiphany, Los Angeles. Edwards-Acton and Carey, guitars in hand, were among several people offering songs from the stage. 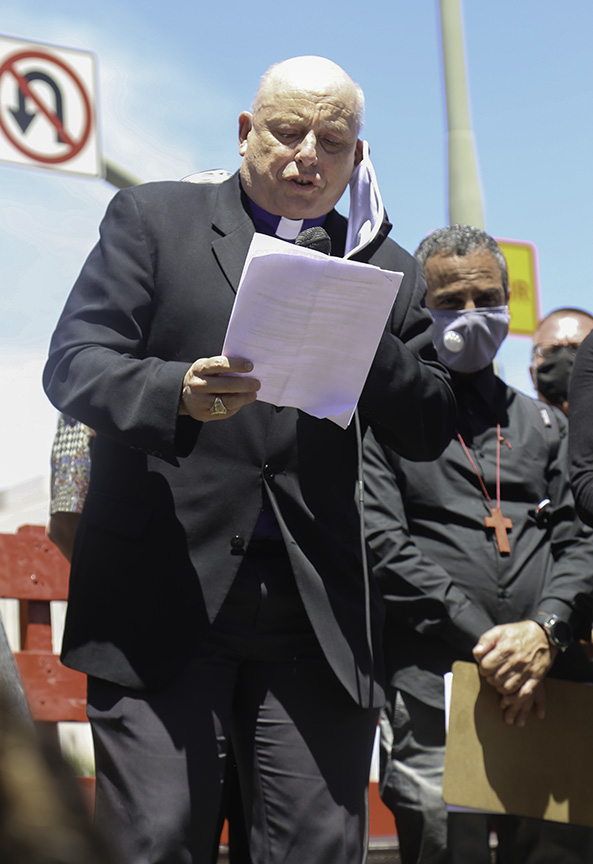 Bishop John Harvey Taylor delivers the final prayer in an eight-minute series that, with 46 seconds of silence at the end, matched the length of time a police officer pinned George Floyd’s neck to the ground on May 25. Photo: Janet Kawamoto

The first phase of the event ended with eight minutes of prayer offered by clergy of several traditions. Bishop Taylor delivered the final prayer:

For George, Breonna, Keisha, Eric, Donte, Grechario, Frederick, Tyler, and all who have been named today, we pray to the Lord.

For their families and all who mourn, we pray to the Lord.

For all who are victimized by unjust and illegal state violence, we pray to the Lord.

For all who work for justice, freedom, and peace and all who oppose anti-Blackness, we pray to the Lord.

For all working and struggling for reforms in community service and safety, we pray to the Lord.
Let us pray: O God, whose mercies cannot be numbered: Accept our prayers for your children and our siblings George, Breonna, Keisha, Eric, Donte, Grechario, Frederick, Tyler, and all who have been named today, who abide in your love in the land of eternal light and joy and the fellowship of your saints. By the strength of our remembrance of them during these days and in all the days to come, make us laborers in the Beloved Community, the earthly land of justice, freedom, love and peace. We pray in your mighty name, Amen.

The prayers were followed by 46 seconds of silence; a total of eight minutes and 46 seconds to represent the time that Minneapolis police officer Derek Chauvin knelt on George Floyd’s neck.

Afterward, the coffins were loaded in hearses and a solemn procession began to City Hall, where Los Angeles’ budget commission was holding hearings on a new city spending plan. Demonstrators joined other activists there to demand reforms, including sharply reduced funding for police and more money for massive investment in the community.

“Officers and deputies [are] sent into so many situations where addiction and mental illness are the major factors that you’d think we would have figured out how to use specially trained medical professionals instead,” Taylor wrote later on Facebook. “Of course then we’d have to take patients to hospitals instead of suspects to jails. And for whatever reason, as a society, we’re not in the mood to do that. Or we weren’t until May 25, the day they killed George Floyd.”

Edwards-Acton also took to Facebook after the rally to call for continued action. “Okay friends,” he wrote. “What can you do? Call? Write an email? Talk to family and friends? Stock your antiracist library? Donate to a black-led organization? Attend a vigil? March? The options are many. Don’t let up. Don’t wait for the right time. Black and people of color don’t have that option. Now is the time.” 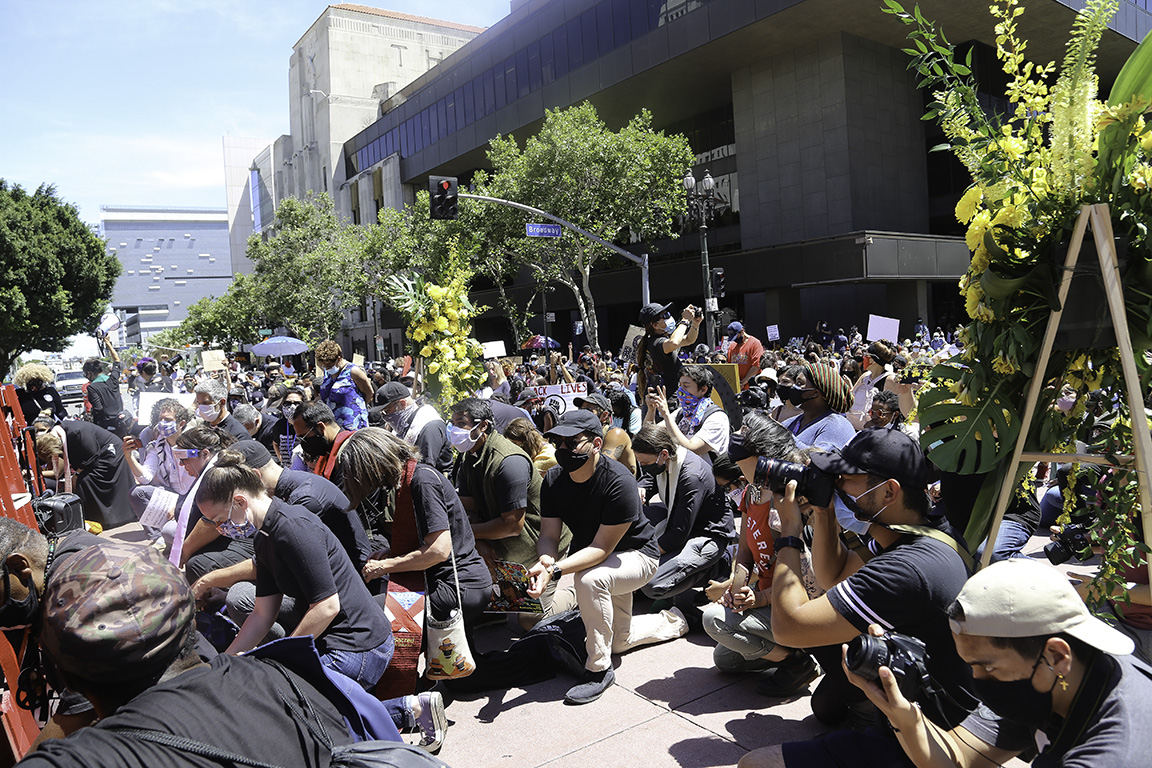 At a call from a rally leader, protesters kneel in memory of George Floyd and others who have died in encounters with police, and to vow continued action. Photo: Janet Kawamoto