Episcopalians join ‘March For Our Lives’ against gun violence

March 24 was the first time 16-year-old Ireland La Munyon had ever demonstrated at a protest rally. She felt called to activism because “I believe I shouldn’t be afraid when I go to school.” 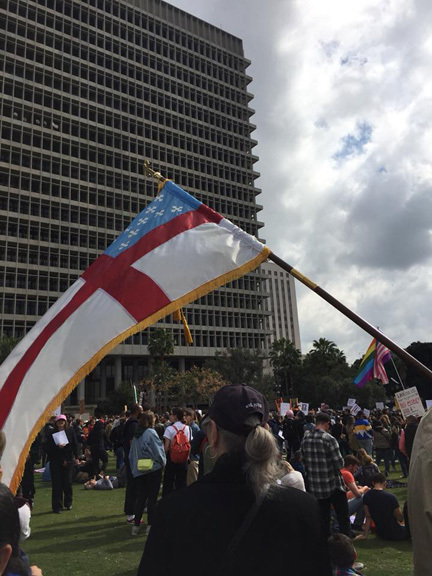 A church flag guides Episcopalians as they gather in Los Angeles for the March for Our Lives gun violence protest on March 24. Photo / Randy Kimmler

The Etiwanda High School sophomore said she protested because of the 17 who died and 14 who were injured in the Marjory Stoneman Douglas High School shootings in Parkland, Florida.

After that incident, she said, “I was anxious and afraid to go to school, and it was affecting my learning.”

Earlier, she had joined a March 14 walkout at her school to protect gun violence. “I passed out flyers that said ‘ten nice things you can do to make your school a better place, like walk up to somebody who looks lonely and talk to them.”

La Munyon, a parishioner at St. Mark’s Church in Upland, joined scores of Episcopalians of all ages at youth-led anti-gun violence demonstrations throughout the Southland.

From Los Angeles to Long Beach, Santa Ana to Riverside, thousands protested a national gun violence epidemic. They were joined by hundreds of thousands of anti-gun violence activists across the nation and the world.

The Rev. Canon Susan Russell said 13 youth members and three adult chaperones from All Saints, Pasadena, traveled to the nation’s capitol to join hundreds of thousands of protestors there.

As part of the Faith Coalition in Los Angeles, Russell invoked the spirit of both anthropologist Margaret Mead and of Jesus when addressing demonstrators: “The truth that will set us free is that the world is changing because of small groups of thoughtful, committed young people who are refusing to accept no for an answer.

“Young #BlackLivesMatter leaders, working to dismantle racism and white supremacy. Young Dreamers, leading the fight for just immigration reform. And young leaders calling B.S. on the gun lobby and challenging all of us to be the change that will set us free of the scourge of gun violence that plagues our nation. Never doubt they can change the world — indeed … look around you my brothers and sisters and gender fluid siblings … they already have.”

She told The Episcopal News: “I’ve marched in more marches than I can remember … and can never remember a more electric vibe than we experienced. And while I’m passionate about the work of ending gun violence in specific I’m even more inspired by the organic intersectionality of this movement in general — a movement that amplifies the voices of young leaders who are genuinely becoming the moral compass of our country and showing us that it is possible to imagine a future where there are no strangers at the gate.”

All Saints, on Friday, March 23, had youth delegations lobbying congressional representatives in Washington, D.C., meeting with the staff of Rep. Judy Chu (California’s 27th district) and Rep. Adam Schiff (28th District). Another group met with Chu herself at her Pasadena office.

On March 24, Russell said, “we turned our Twitter feed over to the youth to post from D.C. I think we had about 80 All Saintsers who left together from ASC via the Metro to downtown L.A. I know lots more connected once they were downtown.

“On [Palm] Sunday we added protest signs to our palms in the processional and one of our youth joined Sally Howard in the pulpit to give the speech he would have given at the rally.

At least 5,000 people at Santa Ana’s Centennial Park chanted “vote them out, vote them out” in reference to elected officials who accepted campaign contributions from the National Rifle Association (NRA). The youth-led demonstrators called for enhanced background checks, further regulations on assault rifles, and an end to conceal carry laws.

Student Sabrina Huang told the crowd: “I’m only 16 but in this world 16 is a meaningless number. My generation has been reduced to a statistic, a calamity waiting to happen as the world watches … afraid to lift its finger and afraid to do something, and when something does occur it is always too late.”

As she named her representative, Republican Mimi Walters, loud boos erupted from the crowd. She added that Walters “took $4,000 from the NRA. In her eyes, my life is worth less than money. My life is disposable, expendable and insignificant.”

Gordon Gallego described how the Parkland, Florida shootings triggered yet again the “images that will never go away” of the Oct. 12, 2011 day in Seal Beach when he hid in a bathroom as a gunman killed five coworkers at the Salon Meritage in a custody dispute with his estranged wife.

To applause and cheers he added: “Why are mass shootings brushed off as the new normal? Why can’t we pass strict gun reform? Or more extensive background checks? Why is your right as a gun owner more important than my right as a human being?”

Extending thoughts and prayers is just not enough, Gallego said. “Your thoughts and prayers don’t take away the sounds of gunshots or screaming or smell of gun power or the blood that seeped under the door that day.” Orange County clergy and laity from the Church of the Messiah, Santa Ana; St. Andrew’s, Irvine; St. John’s, Rancho Santa Margarita; and St. George’s, Laguna Hills, attended the march.

The Rev. Peter Browning, St. Andrew’s vicar, said a dozen or more from St. Andrew’s attended because: “Enough is enough. We are here to help support our communities, to bring an end to gun violence. We want to live in our communities in safety and not worry about children being shot in school, or on the streets, or wherever we are.”

In Claremont, students at Bloy House held a special March 24 worship service, and a march in Riverside in the Inland Empire drew about 4,000.

Joining them, was a group of about 20 from St. John’s, Corona, including Kathleen Saville, a retired teacher, and the Rev. Canon John Saville, retired rector.

“This was my first march for a cause since I marched against the war in Vietnam when I was in college,” Kathleen Saville said. “I have written letters and made phone calls and stayed within my level of comfort but, as the slogans say that we saw everywhere at the March, “‘enough is enough!’”

Saville said she hoped the march raised awareness about gun violence “so everyone understands it really is a problem. While we are studying the causes — mental health, cultural issues, violent movies, video games etc. — we have something concrete we can do … ban the sale of high capacity guns, and close loopholes to make it harder to obtain a gun. We have regulations for owning cars, buying medicine. This should just be part of the requirements for owning a gun.”

Appalled at the suggestion of arming educators, she added: “We were educated to teach. We don’t need to add more guns to solve the problem of too many guns.”

In Long Beach, Kay Lindahl of The Listening Center and other St. Luke’s parishioners joined about 5,000 who gathered in solidarity for the young people leading the demonstration.

“I wanted to show my support for them, let them know I stand with them,” Lindahl said. “In standing with them I also stand in support of all the children of the world. No child should have to fear for his or her life when going to school. No child should have to experience “active shooter” drills. It breaks my heart to hear of elementary students who want to write their wills in case they get shot at school.”

She said she will continue to speak out about “the outrageous carnage caused by gun violence in this country. We are the only country in the world in which there are more guns than individuals, where an average of seven children die from gun violence every day.”

Faith communities, she hopes, will more actively engage the issue collaboratively in the future.

Some members of St. Luke’s had already begun next steps, including sending a letter to the choir director of a local high school, whose gospel choir sings at St. Luke’s every year.

“We let her know that we are there ready to support them in any way possible. She said she will tell the students we called — and then asked us to pray for them. I also plan to work on voter registration — make sure young people get registered and go to the polls to make their voices heard in electing our leaders.”

Meanwhile, 16-year-old Ireland La Munyon of St. Mark’s, Upland, said she isn’t entirely sure what next steps should be.

“I think we’re on the road to change,” she said. “But I don’t think that this is just a ‘no-gun’ movement. If we take away all the guns, it wouldn’t solve the problem. I think a first step is to stop sensationalizing shooters who commit these crimes.”