Peace in the Holy Lands and the history of the Episcopal Church in Southern California were discussed at the first two Birdsall Lectures, held in January and February in Los Angeles. The new series is named for the first priest of the Congregation of St. Athanasius, Los Angeles, which is celebrating its 150th year of ministry. Birdsall in 1865 held a similar series on topics of public interest. 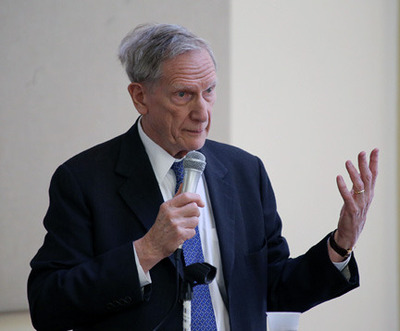 Retired U.S. Ambassador Warren Clark, executive director of the Washington D.C.-based Churches for Middle East Peace, spoke on “Jerusalem Epiphanies” at the first Birdsall Lecture on Jan. 24 at the Cathedral Center of St. Paul in Los Angeles.
Clark, an Episcopalian, outlined the history of Israel and Palestine and some of the historical forces that have led to divisions today, and engaged the audience in a discussion of efforts to facilitate peace in the Holy Lands. Clark laid emphasis on the two-state solution, exploring the possibilities for peace in the region based on an equitable division of territories and authority — a solution he is confident can come about, though it will not be easy, he said, and will require careful diplomacy and respect for the rights of both Jews and Palestinians, and good-faith concessions on both sides.

Following Clark’s presentation, Trent Pettit of St. James’ Church, South Pasadena, and Summer Torrero of St. Athanasius’, Los Angeles, described their experiences on diocesan pilgrimages to the Holy Lands. Pettit was one of the young adults who visited there in December 2014; Torrero made her pilgrimage as a teenager in 2011. 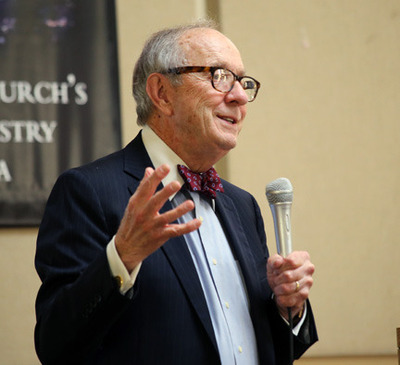 Nat Read, local history expert, delivered the keynote address at the second Birdsall lecture, titled “The Episcopal Church and the American Experience,” which drew a group of history buffs and church historians to the Cathedral Center on Feb. 28.
Read, author of From Mountain Man to Mayor: Don Benito Wilson, Los Angeles 1841 – 1878, described the life and exploits of Benjamin Wilson, an early transplant from the U.S. to California, who had a profound effect on the history of the state and especially on the local beginnings of the Episcopal Church. Wilson, Read said, was determined to establish a Protestant Christian congregation in the wild frontier town of Los Angeles, and finally succeeded, with the help of the Episcopal Church and the Rev. Elias Birdsall, in establishing St. Athanasius’ Church.

Attendees at the Feb. 28 lecture also saw clips from the upcoming documentary Malcolm Boyd: Disturber of the Peace, presented by filmmaker Andrew Thomas (see more in Boyd’s obituary on page 8).

Bruce Merritt, author of St. Mark’s Journey: A History of St. Mark’s Episcopal Church, Glendale, California, 1888 – 1989, described how he came to write the parish history and give pointers on how other congregations might research and present their stories. Bob Williams, canon for community relations for the diocese, concluded the day with a description of the Horizons & Heritage website, now under development, that will eventually include histories and photos from all congregations in the diocese. He encouraged attendees to send information about their churches to news@ladiocese.org to be included on the site, found at horizons.ladiocese.org.