Delegates, visitors and guests at the 120th annual convention of the Diocese of Los Angeles erupted in thunderous laughter and applause on Dec. 5 as the Rev. Renita Weems, a Nashville-based author, Old Testament scholar, seminary professor, academic administrator, African Methodist Episcopal church pastor and this year’s Margaret Parker lecturer, said that she, like many in the church and like many churches, is “a Flintstone trying to be a Jetson.” 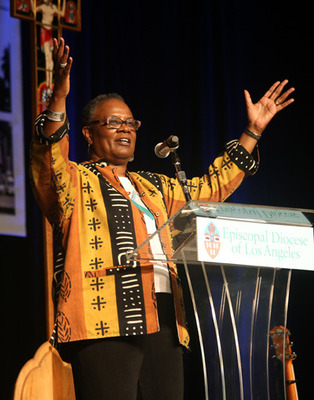 “I don’t want the world to leave me, I want to catch up to where it’s going,” said Weems, 61, the fourth Margaret Parker lecturer. With her iPad in hand, she wove a poetic tapestry of personal reflections of her life’s “helter skelter” journeys while tackling such pressing church and secular issues as racial reconciliation, change, and the nation’s pervasive violence amid uncertain times.

That journey moved her from the days of her youth, growing up in the 1950s and 1960s on the cusp of the Black Power Movement with a proliferation of “prophets” in her hometown Atlanta Pentecostal church, to earning a bachelor’s degree from Wellesley College.

She worked as a stockbroker for Merrill Lynch and Coopers, Lybrand, and later earned a master of divinity degree at Princeton University. She was the first African American woman to earn a doctoral degree there — an accomplishment about which she commented: “No one wants to be the first of anything. It is systems and powers that make you first; you just want to do God’s will.”

The lecture series celebrates the peace and justice ministry of Canon Margaret Parker, who died in 2007 at age 93. It was inaugurated in 2008 by then-Presiding Bishop Katharine Jefferts Schori, followed in 2010 by progressive evangelical Jim Wallis, founder of Sojourners magazine, and in 2013 by Massachusetts Bishop Suffragan Barbara Harris.

Parker served the church for more than 70 years, 52 of them alongside her husband, the Rev. Canon Richard Parker, who was for 42 years rector of St. Cross Church, Hermosa Beach. Margaret Parker served in a variety of capacities, partnering with her husband at St. Cross as well as becoming a statewide leader among Episcopal women and Church Women United, and helping to redefine the role of women and people of color. Bishop J. Jon Bruno recognized Parker’s ministry in 2002 by naming her an honorary canon of the Cathedral Center of St. Paul.

Weems, the author of numerous works, including Just a Sister Away: A Womanist Vision of Women’s Relationships in the Bible (LuraMedia, 1988) and Listening for God: A Minister’s Journey Through Silence and Doubt (Simon and Schuster, 1999), invoked a college mentor, Bernhard Anderson, author of Understanding the Old Testament, who described the story of Israel as “how God brought people from a struggle through a struggle to a struggle.”

God is calling us to ‘newness’

Delegates chuckled as Weems noted God’s persistent call to newness even though much of life is “preaching as though you have a sermon … until the sermon comes” and responding in faithfulness in the midst of uncertainty, just in case it is God who has come calling.

Summarizing the late Phyllis Tickle’s reflections about the sweeping change, the new reformation, the “cleaning out of the attic” going on in the church, as fears about where the church is going include “not just what is the future, but does the future have a church in it? Could it be that God, not just culture, is up to something?”

Weems said the Ray of Hope Community Church she co-pastors with her husband, the Rev. Martin Espinosa, in Nashville, is also experiencing dwindling membership, declining offerings, decreased enthusiasm and a changed neighborhood — and that its members were being informed even as she spoke that the church has been sold, and the congregation must move to another site.

She said the church had “to relocate or cease being relevant. There is some change we cannot change and so we must now move a congregation that is tied to a particular area and help them to unmoor from that area.”

But God’s call to newness also seems to spark inertia among church-goers, she said — folks like Reuben, in the Genesis 37:12 story of Joseph. Reuben proposed throwing his brother into the pit. He didn’t want to kill his brother, Weems noted, “but didn’t want to help him, either.”

Viewing Joseph as a threat to his own security, she said, “Reuben is the one who stands there and sees changes coming, who knows that Joseph represents the future … who’d rather die than see change come. I am amazed, as a college administrator and a co-pastor, at the people who would rather see the church die than change.”

She recalled her attempts to spark change with requests for Afrocentric worship and the use of drums and gospel music at a Cambridge, Massachusetts, church she attended years ago. Now, at her own church in Nashville, when a young pastor gets up and “preaches in that rap sound I must clap, just in case God speaks through him,” she chuckled.

But, she added that: “I must speak to the Reuben in me. Now I’m 61, and thinking, ‘Oh Lordy, it’s so loud in here.’ But I want it to be said that I want to move forward with God. I do not understand a thing that boy says, but I believe that God speaks, even through hip hop.”

Reuben symbolizes the apathetic, she said, those whose identities are so wrapped up in what they do, in their position and power in the church and “who don’t really want to see the church change. But, God is about change,” she said. “Everyday I must speak to the Reuben in me. The one that prefers to hear the music of my youth over the music of my daughter’s youth.

“The point I’m making here is we can be wrong. We can stand up and say I was wrong.”

Newness is also happening as North American mainline churches decline but global South congregations are on the rise, she said. “That must be hard to swallow for some of us,” she said. “There’s a God who sits high and looks low and can you share the church with the least of these … with the darkest of these, whose traditions will be so different?”

She invoked the spirit and legacy of Margaret Parker while describing the story of Matthias, who replaces Judas as the twelfth disciple in the Book of Acts.

“I never heard of him but Peter does give the job description. Has to be somebody who walked with Jesus, who has seen the resurrection, who knew Jesus. Perhaps the story about justice and power and gender and sexuality and love and marriage 2000 years later would be different if they’d just had the courage” to appoint Mary Magdalene instead.

“Behold, I do a new thing with the earth. Do you not see it? Do you not see it? And even in 2015 at your Margaret Parker lecture, in the midst of the business of the church, just a few miles down the road from [the San Bernardino shootings] and presumably terrorism, rage and anger, murder and mayhem, and you sit here asking, ‘what shall we do? Who will we raise?’ Look around and see how much you all are alike.”

She included a story about her daughter, whose desire to bring a friend along on a family vacation to Hawaii challenged Weems to confront her own Reuben.

“With all of my blackness and Southern-ness and being my daddy’s daughter and all of my history … but I had to make a decision, whether my demons were going to become her demons. So, Becky came, because there is a God who sits high and looks low and I never wanted my child to become who I have been over the years and so I leave you with great words of African slaves:

“Over my head I hear music in the air … it’s not the music that I sing, but I will clap and I will shout for the children’s sake, for I believe that there is a God somewhere who sits high and looks low, and God says, ‘I am with you even until the very end of the earth.’”