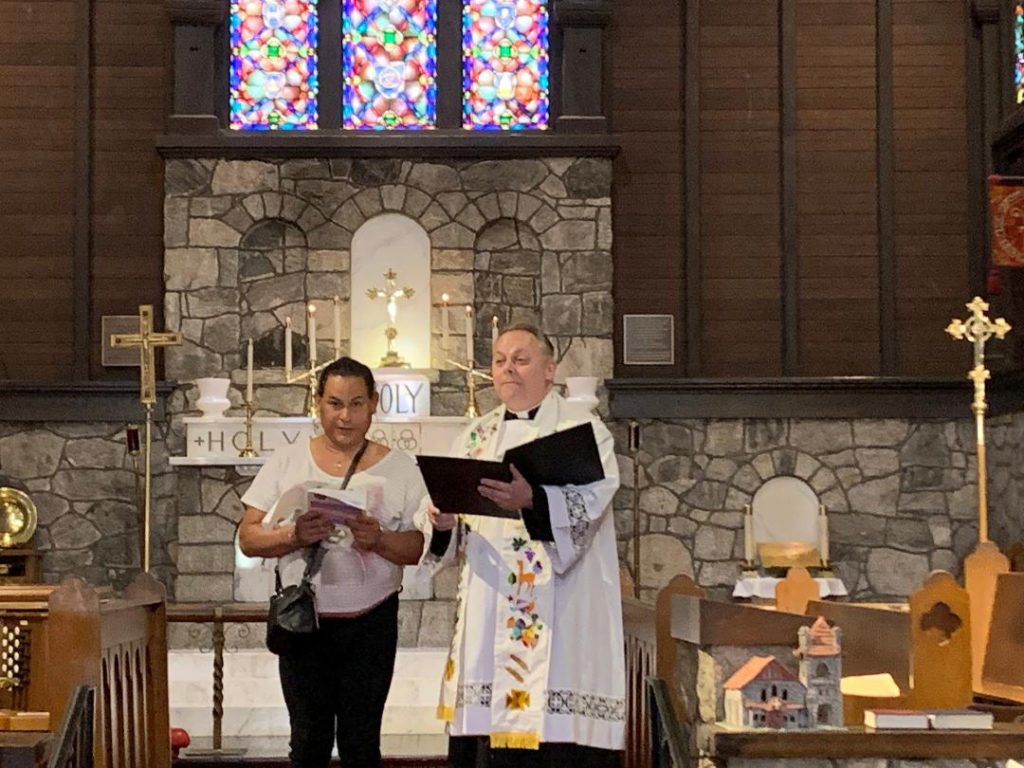 FOR JENNIFER GONZALES, 49, participating in a June 7 Service of Renaming at Holy Trinity Episcopal Church in Covina was claiming her authentic self.

“I knew I was transgender from a young age, even though I did all the boy stuff – biking, skateboarding,” Gonzales told Episcopal News Service after the ceremony. “My mom didn’t know, really. One time I told her, ‘Mom, I’m transgender.’ She laughed at me.”

The ceremony is included in the Book of Occasional Services 2018, a liturgical resource of The Episcopal Church that was released in April 2019 and is available online. The Service of Renaming is intended for “when an event or experience leads a baptized person to take or be given a new name. … This new beginning is distinct from the new life begun in Holy Baptism.”

The Book of Occasional Services is a companion to the Book of Common Prayer and offers ceremonies and rites for occasions that occur too infrequently to be included in the prayer book. Authorized by the General Convention of The Episcopal Church, it includes rites intended to aid congregations in celebrating specific occasions, such as the Blessing of a Pregnant Woman, St. Francis Day animal blessings, and the Way of the Cross, which typically is used during Holy Week and represents Christ’s journey to the cross.

Vicky Mitchell, 58, who attended the June 7 ceremony and identifies as a transgender woman, said the rite makes sacred what too often has been ridiculed and shamed.

The renaming service can help counter “dead-naming,” the practice of referring to transgender persons by the names they used before transitioning to their new identities.

“For trans people, identity is a really core thing,” Mitchell said. “It has to do with the divine image, with personal identity. Naming is just so special, having our name accepted, knowing that our name is lifted and that we have found the right one for us.”

Many transgender people, including Mitchell herself, “knew years and years ago that the outward image that all the rest of you saw did not match the image within our hearts,” she said. “We didn’t know how to communicate that to you for so long. But we kept looking, kept seeing this, and finally one day, it was either let it out or harm ourselves.”

“I knew I was female in spite of being the father of three children,” she added. “I tried for years to fit in with my male counterparts.”

The discontinuity between inner awareness and outer appearance can lead to heightened suicide rates compared to the general population, she said.

A 2018 study by the American Academy of Pediatrics indicated that more than half of transgender male teens, 29.9% of transgender female teens and 41.8% of nonbinary teens, or youth whose gender identity may fluctuate, said they had attempted suicide at least once.

Additionally, a Human Rights Campaign online survey of 12,000 LGBTQ youth from all 50 states and Washington, D.C., revealed “heartbreaking levels of stress, anxiety and rejection” from family and others. It also indicated that all LGBTQ teenagers “overwhelmingly feel unsafe in their own school classrooms.”

The 2017 report indicated that transgender youth were twice as likely to be harassed and mocked by family members. About 51% reported they are barred from using school restrooms matching their gender identity.

‘I am a new creation, grateful to embody Christ’s image’

After the April release of the Book of Occasional Services 2018, “Jennifer and I read the service together and we both started crying,” recalled the Rev. Steven De Muth, Holy Trinity’s rector. “I asked her if doing it would be a blessing, and she said yes.”

Gonzales, who lives in Covina, said she felt nervous before the ceremony’s start, practicing again and again her one-line response: “I am a new creation, grateful to embody Christ’s image.”

“I’m trying to memorize it,” she told De Muth, who officiated. The ceremony recalled scriptural name changes, such as “Sarai, who became Sarah; Jacob, who became Israel; and Simon called Peter,” and included prayers for the LGBTQ community written by Rabbi Heather Miller of Temple Beth El of South Orange County, California.

“This isn’t my story to tell. I am simply a companion on the road,” De Muth told about 50 worshippers in a reflection during the ceremony.

Speaking directly to Gonzales, he said: “Along the way, you captured our hearts with your willingness to participate in our ministry of feeding those who are hungry.

“You captured the imagination of The Episcopal Church who, until they met someone who was transgender, the beauty of experience and the challenge of experience were just on a written page. For us, you’ve brought that to life.

“It’s sometimes not until your heart is touched by someone you love that you begin to understand and to care.”

The service was co-sponsored by the Covina and Pomona chapters of GLEAM – Gathering LGBTQ Episcopalians in Advancing Ministry in the Diocese of Los Angeles. During a meal after the ceremony, they led a conversation about challenges specific to transgender persons.

“The Episcopal Church has been way ahead” in supporting LGBTQ persons, Robert Amore, coordinator for GLEAM’s Pomona chapter, told the gathering. He described “as groundbreaking” the General Convention 1976 Resolution A069, which affirmed the full and equal claim of homosexual persons as children of God deserving of the love, acceptance and pastoral concern of the church.

From the election of the Rt. Rev. Gene Robinson as the first gay bishop in 2003 to renaming ceremonies, “we just keep going,” he said. “Here I am, 64 years old, and things are opening up and I’m so grateful.” Speaking of his experience at the renaming service, he said, “I could just feel the joy in God’s spirit, and this is how we go forward – in joy.”

When Gonzales first selected Jennifer as her new name, “the people I told laughed at me,” she told ENS.

Others dead-named her, “almost weaponizing my former name and calling me by it to make me feel bad. It makes me really mad,” Gonzales said.

“When I was a guy, I didn’t like myself. I was really self-conscious. I couldn’t even go into a place or a building that had people in it, I hated myself so much. But I don’t care now. I go wherever I want, and if somebody’s hateful to me, I say to myself, ‘Just give it to God.’”

The Rev. Julie Kelly, pastor of Hope Lutheran Church, an Evangelical Lutheran Church in America congregation in Riverside, told the gathering she is “the proud mom of a young bisexual man, two straight young men and a nonbinary transgender transmasculine child as well” and that dead-naming is a very real and very damaging occurrence.

“‘Dead name’ sounds so powerful and hurtful for some people,” she said. “Some trans persons don’t use the word because they appreciate their history, their previous name, but they also know that is not representative of who they are now.”

As a member of several support groups for transgender parents and children, Kelly said parents often have difficulty with the new names chosen by their children.
“It doesn’t mean that we’re ever denying the love, the intentionality, the nurturing of that person. It’s just a name we picked before we knew the person, and now the right name has risen up and that is a sacred thing,” Kelly said.

“We rebirth our children over and over again. That’s what parenting is. We rebirth, we go through the pain and we watch them become a person on their own in the world.

When we let the dead name go and we acknowledge how important that is, we give them that breath, just like the first one they take after they are pushed out of the womb.”

She said it is vital for communities to understand the importance of and to support the acceptance of transgender persons’ chosen names.

“I am very proud of my church,” Sanchez told ENS. “It is very open, very human. We really try to help everyone believe they are made in God’s image. We celebrate our diversity, and our dignity, that we are all God’s children.”

Originally published by Episcopal News Service, for which the Rev. Canon Pat McCaughan is also a senior correspondent.