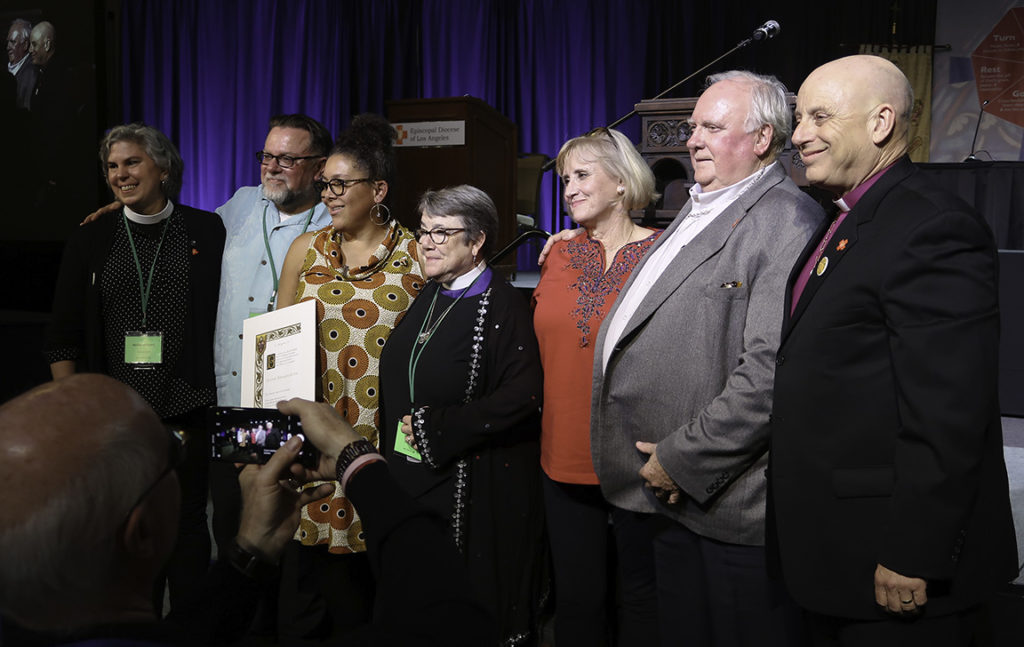 DURING THE FRIDAY NIGHT DINNER on Nov. 15 at Diocesan Convention Bishop John Harvey Taylor named two lay leaders as canons of the diocese, chosen in consultation with Bishop Suffragan Diane Jardine Bruce and Canon to the Ordinary Melissa McCarthy.

“Jim serves on Diocesan Council, the Program Group on Mission Congregations, and the diocesan Disciplinary Board,” said Taylor. “He’s been president of Deanery 1 for multiple terms, helped scope out the site for the Cathedral Center, and served on the last bishop search committee.

“For over 20 years, he has driven a 160-mile round trip to perform his ministry as property supervisor for the St. James Manor Foundation.

“Jim’s rector, the Rev. Dr. Greg Kimura, who nominated him, calls him ‘the exemplar of servant leader,’” said Taylor. “He gives tirelessly on the local and diocesan levels, deflecting credit to others, and bringing a deep spirituality to his work, in and out of the church.”

The second new canon is Suzanne Edwards-Acton of St. Stephen’s Church, Hollywood. “Like Jim, Suzanne was born into The Episcopal Church,” said Taylor. “Her family’s roots are at the historic African Episcopal Church of St. Thomas in Philadelphia – the parish of Absalom Jones.

“Holding masters’ degrees from Loyola Marymount and the Seminary of the Southwest,” Taylor continued, “Suzanne is a teacher, a former principal, and a devoted advocate for education equity in under-resourced neighborhoods in Austin and Los Angeles.

“Her diocesan ministries are legion,” Taylor said, beginning with her workshops in making and praying the Anglican rosary. “Check out her podcast, called “Week By Week Beads,” he noted.

Edwards-Acton, he said, is a longtime member of the Program Group on Black Ministries, and recently became its chair. “For many years she was director of our nationally renowned Episcopal Urban Intern Program, now called Jubilee Year Los Angeles, showing young people how to exit their undergraduate careers into service and advocacy,” Taylor said, adding that she also is a former board member of Episcopal Service Corps and a certified spiritual director.

“Her nomination sprang nearly simultaneously from the hearts of Bishop Bruce, Canon McCarthy, and me,” Taylor said. “Along with the other Canon Edwards-Acton, her spouse Jaime, Bishop Bruce is her nearly daily collaborator in mission and ministry, with a particular focus on racial equity and justice.

“Bishop Bruce writes, ‘Suzanne’s leadership in the H. Belfield Hannibal chapter of the Union of Black Episcopalians has been integral in expanding and deepening the membership of the group. … She uses her varied gifts and skills to bring life and light to every ministry she touches.’”

“Canon of the diocese” is a title slightly altered from that bestowed on previous honorees, who were named “canon of the Cathedral Center of St. Paul” – the diocesan ministry and administrative hub now known as St. Paul’s Commons. St. John’s Cathedral, Taylor said, has its own canons; therefore a new designation is needed.

“So beginning this evening,” Taylor said, “let it be known that from time to time I’ll have the blessing of naming canons of the Diocese of Los Angeles – individuals who have distinguished themselves in diocesan-wide ministry. Bishop Bruce, Canon McCarthy, and I make the choices each year. We are always eager to get your recommendations.

The title “canon” dates from medieval times. It denote a key advisor to a bishop or a cathedral community. Links to annual and alphabetical lists of honorary canons is here.