How do churches do in-person worship safely in a time of COVID? They follow the rules — and improvise 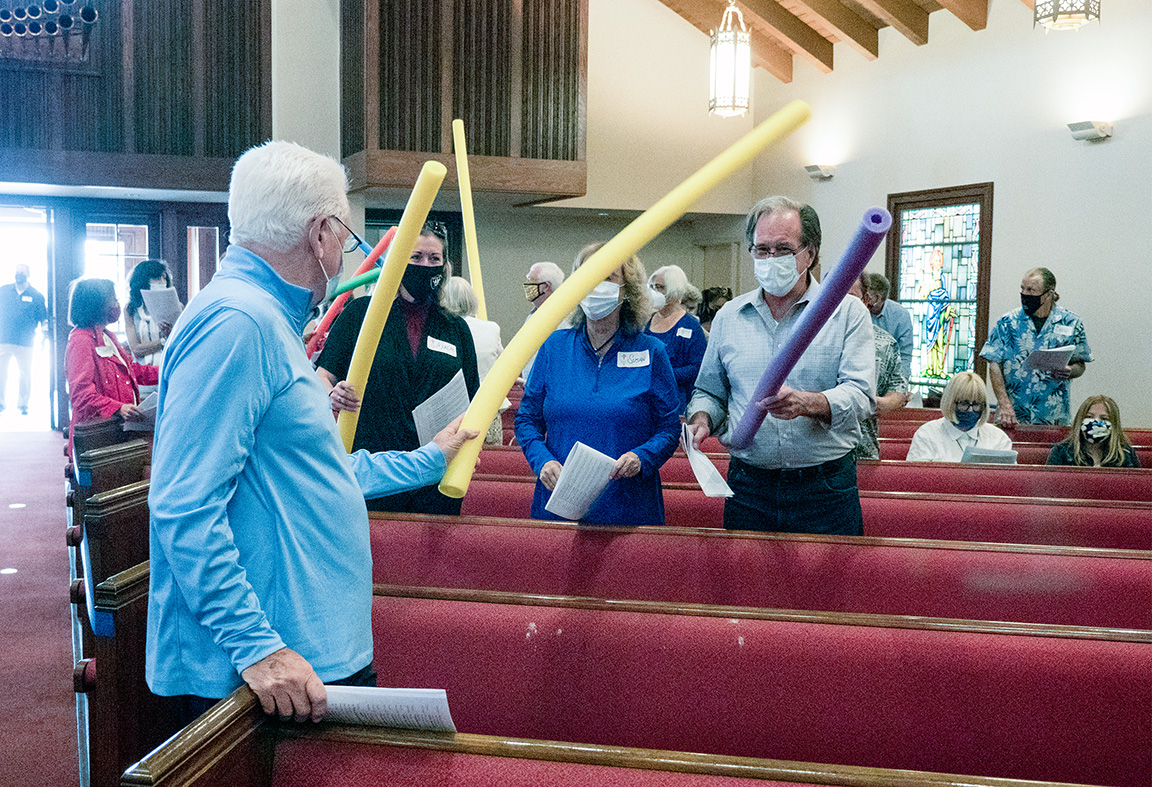 Parishioners at St. James’ Church, Newport Beach, use pool noodles to distance themselves as they return to in-person worship. The noodles also offered a safe and gentle way to pass the Peace without direct contact. Photo courtesy of Cindy Voorhees

Across the Southland, Episcopal church congregations, eager to safely return to in-person worship June 21, yet facing a series of restrictions, have opted to improvise.

At St. Martin in-the-Fields Church in Twentynine Palms, for example, June 21 worshippers ranged in age from 3 to 87, and for them “no music” meant “we sang with our bodies,” according to the Rev. Peg Ventris, vicar. “We got up and danced, clapped and next week I’m giving out tambourines.”

Social distancing involved creating two “corrals” at either end of the church for parents with young children. “It was just a circle of chairs with the backs out and ways to get in, so parents and children could sit in a circle and bring their own toys,” she said. “I have a huge box of toys, but I can’t possibly clean them properly. So, like the prayer books and hymnals, they’ve been put away.”

“You’d go into a pew that wasn’t taped off, start in the middle and put the noodle on either side so people would know how far away to sit,” Cooper said. In addition to Cooper and her partner Jackie, another couple and a single person sat in the same pew, she said.

And, at the Rev. Canon Cindy Voorhees’ invitation, “We did the peace with them, touching our pool noodles because we couldn’t shake hands or hug or anything. And since it was Pride month, they were in a rainbow of colors.” 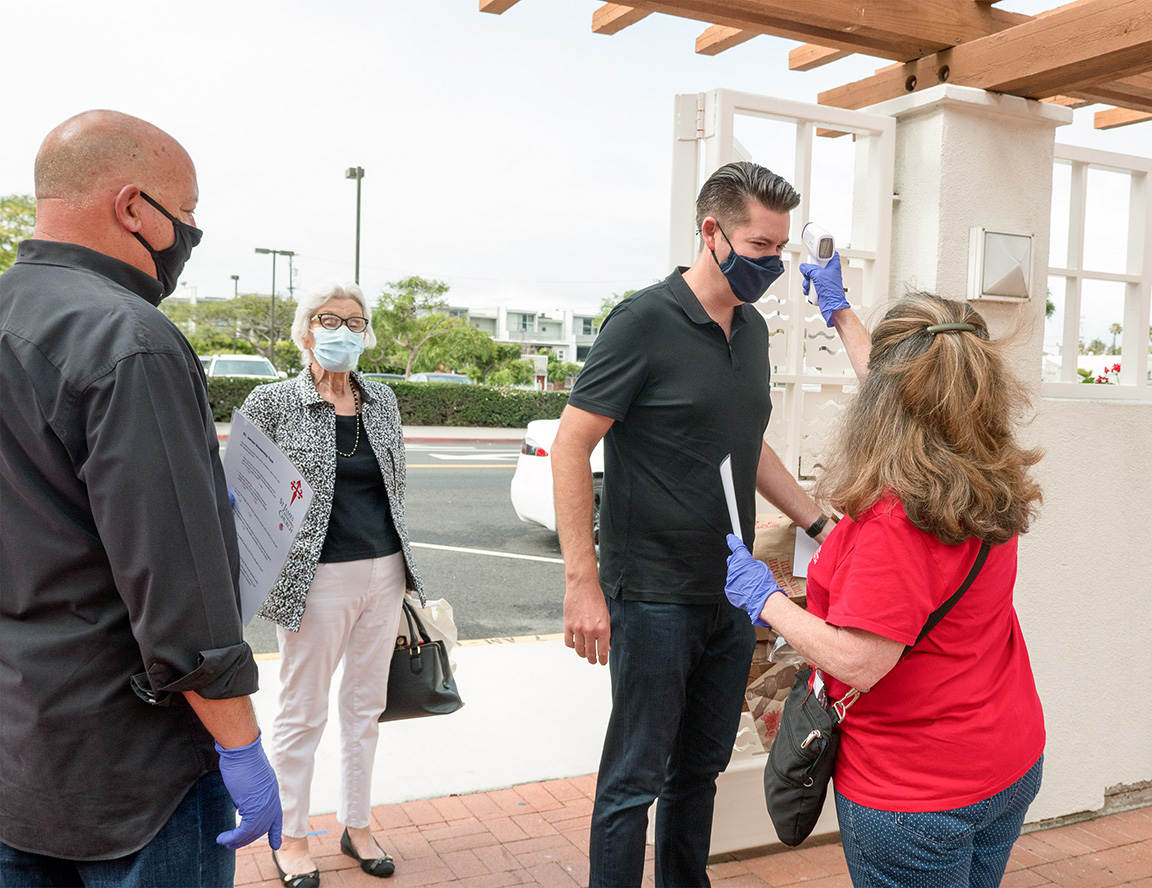 Parishioners arriving at St. James’ Church, Newport Beach, get a temperature test before entering for the congregation’s first in-person worship since the COVID-19 shutdown that began in March. Photo courtesy of Cindy Voorhees

St. James’ worshippers were greeted with gift bags — hand sanitizer, a St. James face mask and welcome home notes — and a bagpiper, she added. “I live locally, and as my partner and I were walking to church, we could hear the bagpiper two blocks away. It was really cool.”

At St. Paul’s Episcopal and Emmanuel Lutheran Church, a blended congregation in Santa Paula, the Rev. Cynthia Jew, vicar, said the altar party used face shields to help protect the congregation and “because I have parishioners who need to be able to read lips.”

About 80% of her congregation attended the in-person worship, said Jew. “These were all people who would not go on Facebook, so they had not seen church. We had been recording the services, but for technological reasons or because they couldn’t hear it or didn’t feel comfortable, they had not received any sort of church for ten weeks. They felt they had been in the wilderness a long time.”

Although worship was different — everyone wearing masks, and no offertory, just instructions to place offerings in collection plates prior to the service, and no traditional Eucharist — still “it felt like church for them,” Jew said.

Church of the Holy Communion in Gardena offered a combination of both in-person and digital worship, according to the Rev. Arthur Toro. Many other congregations of the diocese did the same.

“It was a very short service,” according to Claassen. “Everyone was deeply grateful for this gathering and for the space in which to hold it.”

At St. Mary’s Church in Lompoc, the Rev. Michael Cunningham held two June 21 in-person services but, after evaluating the risk, decided to return indefinitely to online worship only.

“I believe the pandemic threatens the building up of the family of God if we continue to worship in person at this time,” Cunningham wrote to parishioners in “The Bells of St. Mary,” the church’s June 24 newsletter, after a recent surge in local coronavirus cases. 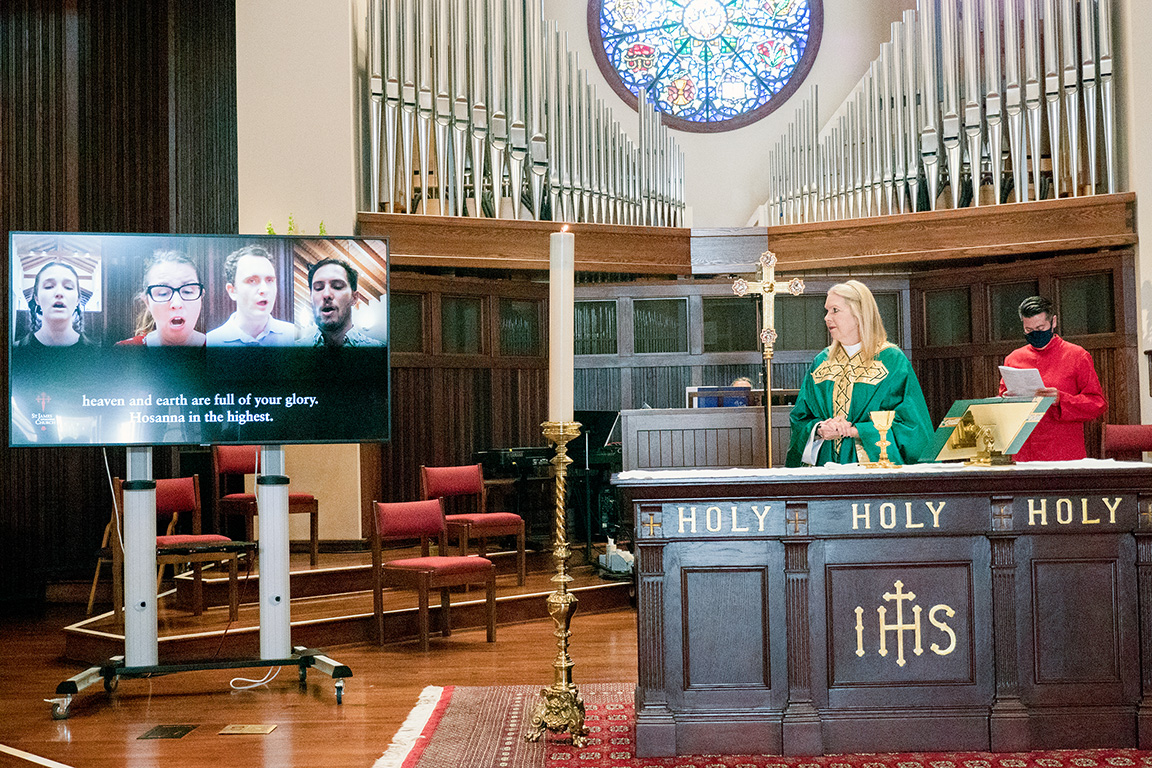 According to a June 30 Los Angeles Times report, Santa Barbara county had recorded 827 new COVID-19 cases and 11 deaths in the previous two weeks. It ranks 18th among the state’s 58 counties with the highest number of coronavirus cases.

“Clearly, we are being faithful and strong in our attempts to reach out to all who have joined us, and I pray that will continue as we go forward in ministry into God’s future,” Cunningham told The Episcopal News.

“They had 81 new cases in Santa Maria the week leading up to our reopening … and four deaths in a row. That caused me to do some serious rethinking.”

While some third-party groups will continue to hold events outside at the church, worship will continue with a 9 a.m. Facebook Live service, Cunningham said.

On June 1, Bishop John Harvey Taylor provided an extensive set of guidelines that detailed steps that the diocese’s churches need to take before reopening, covering everything from hand sanitizer to administration of the Eucharist to the return of outside groups such as AA. About 20 diocesan congregations have filed the required pre-return checklist with the bishop’s office, but not all have resumed in-person worship, according to Canon Janet Kawamoto, Episcopal News editor, who has been helping to tabulate responses.

The guidelines, developed with the aid of the bishop’s council of advice, consisting of the deans of the diocese’s 10 deaneries, a vice-chancellor and other leaders, will be updated soon.

Both Voorhees and Jew said preparation was key to a smooth return.

They published written protocols and created and sent ‘what to expect’ videos to members prior to their respective June 28 and June 21 returns to in-person worship. “That alleviated a lot of fear,” Voorhees said.

Jew polled St. Paul’s and Emmanuel’s parishioners prior to reopening, inquiring about their preferences and comfort levels. “About 50% responded that they wanted to come back,” she said.

Voorhees said St. James’ took reservations to accommodate those who wanted to return, but has not yet resumed Sunday school. Although there was a spike in Orange County cases as well, she said “Newport is pretty safe and truly people miss being in church.”

Orange County on June 30 reported a record 779 new coronavirus cases in a single day, along with 11 new deaths, bringing to 56 the total deaths. The county has a total of 13,843 cases.

A pre-recorded virtual choir was livestreamed during the service and was also accessible to parishioners watching from home, she said.

As with other congregations, temperatures were taken at the door using touchless infrared gauges. “No one came with a fever,” Voorhees said. “We had a greeter who was very adept at conflict management and if someone wasn’t going to wear a mask, he was in charge of defusing the situation.”

Voorhees, a liturgical designer and builder of churches, said she was able to acquire ultraviolet scrubbers to attach to the air conditioning system. The devices are said to eliminate 99% of any airborne virus.

Additionally, with everyone wearing masks “there is a 99% chance no one’s going to catch anything.” She said the congregation has been hosting “virtual church for five years so it was an easier pivot for us than most churches.”

Both congregations received positive feedback regarding the services.

“I found it heartwarming,” said Tony Jones, a St. James’ parishioner. “People were beaming. The noodles and masks and everything else didn’t deter worship in any way. Coming up with the noodle allowed it to be more free-flowing.”

While everything went smoothly in Santa Paula, “I realized two things,” Jew told The News. “It was hot. I have to get a face shield that slips up so I can get a little bit of air. And, people didn’t want to use the hand sanitizer. They thought it was strange.

“We had an usher do the pumping, but it was goopy and felt weird to them. They brought their own.”