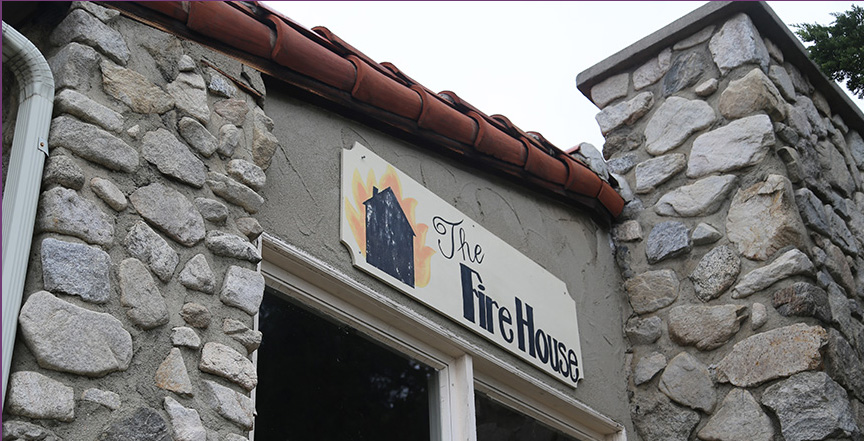 The Fire House teen center at St. Luke’s Episcopal Church, La Crescenta, provides a safe space for teens of any faith or no faith from local middle and high schools. Photo / Janet Kawamoto 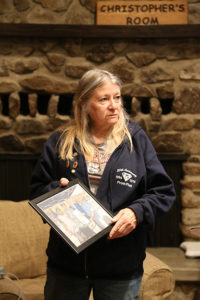 They pause at a table in the entryway to grab cereal and breakfast bars, fresh fruit, orange juice, milk, cups o’noodles, eggs, pancakes, sausage and chips before moving on to hang out with friends.

For Cian Covington, 14, and Zeleste Felipe, 14, the food and company are an equal draw. “I come here because sometimes my mom doesn’t have time to drop me off at school because she has to go to work early,” said Felipe. “And it’s kind of cool how people make food for us and keep things open for us. That’s really awesome.”

“I wake up at 6 a.m. just to get here early and play pool till it’s time to leave,” Renn told The Episcopal News on a recent Thursday morning. “I don’t eat; I come to play pool. Thursdays are a really good day for me. I can come here with my friends, for me.”

Ivan Tyler, 16, comes for homework help some Tuesdays after classes at La Crescenta High School and is at the Fire House “almost every Thursday morning. It’s fun. It’s like a privilege,” he said. “Not every town has a place like this.”

Seated at a nicked and seasoned Baldwin upright piano in an area known as the music room, Rin Flores, 14, uses the early morning hours for extra pre-audition practice for a place on the Crescenta Valley High School Symphony Orchestra.

He pauses briefly from practicing Chopin’s Etude Op. 25, No. 11, “Winter Wind,” to confess, “I have six more pages to learn.” 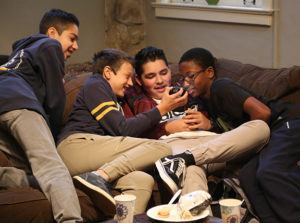 Teens gather with their friends in the comfortable living areas of the Fire House for breakfast, fellowship, music practice, pool and last-minute homework before school. Photo / Janet Kawamoto

The Rev. Antonio Gallardo became St. Luke’s priest-in-charge under special circumstances in March 2019 and presides over both English-language and Spanish-speaking congregations that are committed to preserving the richness of both while moving toward unity.

“The reality in our church, unfortunately, is that often you end up with two congregations and one within another,” Gallardo said of navigating the challenges of merging bilingual congregations. “St. Luke’s is talking about working tog ether. They want to do whatever it takes to become one, because separation is not what God is calling us to do.”

The scrappiness of both the church and the Fire House was forged through adversity, resulting in a mighty presence that resonates throughout the Crescenta Valley, and a commitment to supporting the entire community’s vision of who and what they want to be, he said.

“It’s a small, but mighty, powerful place,” Gallardo told The Episcopal News of the congregation that went for at least a year without full-time leadership prior to his appointment.

A decade after church property was returned by a breakaway group, the congregation is still healing from the split, as are Spanish-speaking congregants who transferred to St. Luke’s after Ascension Episcopal Church in Tujunga closed in 2012.

“The wounds are still there,” Gallardo said. “There is healing that needs to happen and yet this is a group of people who are very committed. They want to support the community in becoming what it envisions itself to be.”

Although small, St. Luke’s “serves over 500 youth per month from junior high and high schools through the Fire House,” he said. “We also provide a place of gathering for recovery groups, the Lions Club. The Gooden Wellness Center is located in the rectory.”

Both church and former firehouse are made of stones mined from the nearby Angeles National Forest. Designed by distinguished artist and La Crescenta resident S. Seymour Thomas and built in 1924, St. Luke’s is considered an architectural centerpiece of the valley. It acquired the firehouse building in the 1950s.

Over time, it served as Sunday school classrooms and for youth activities, but was reborn in 2010 as the Fire House youth center in response to a community heroin epidemic among local youth, she said.

“That was around the time the church property came back to us,” said O’Keefe, referring to the congregational split over theological differences including the full inclusion of LGBTQ persons and women in church leadership and sacramental rites. “During that time, I went to St. George’s, La Cañada, but I came back.”

The Rev. Bryan Jones, now retired, was St. Luke’s vicar at that time. He described the Fire House as a place for all youth, “whether they belong to our church, another church or no church at all.”

O’Keefe said Jones’ theory that “if you feed them, they will come” focused organization of the Fire House, and a strong connection to the church remains. “This church really is the community,” she said, adding of the current vicar, “Antonio has really embraced that, and we feel really lucky he is here.”

Many community partners collaborated to create “a place that’s home” for area youth, among them both St. Luke’s and St. George’s, the Crescenta Valley Drug and Alcohol Prevention Coalition and the Kiwanis, as well as many individuals and volunteers who faithfully continue to staff the firehouse, according to O’Keefe, 60, a crime reporter for the Crescenta Valley Weekly newspaper and a 25-year parish member.

“When we came in, it had a TV and that was about it,” said O’Keefe, whose three children were baptized at St. Luke’s. “It was kind of like it wasn’t used except sometimes for a family counseling center.”

The community has supported the center with donations of flooring, televisions, pool tables, pianos, games and dedicated furnishings and rooms, as well as food. 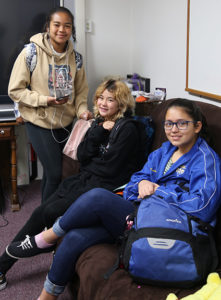 Teens gather with their friends in the comfortable living areas of the Fire House for breakfast, fellowship, music practice, pool and last-minute homework before school. Photo / Janet Kawamoto

‘Of and for the community’

The Fire House is home to students on Tuesday evenings and Thursday mornings, and on Wednesday evenings to a “Cool Group” of special-needs young adults, as well as LGBTQ youth and to those questioning their identity — and everyone else, O’Keefe said.

“It’s a community youth center; the community that supports it. It’s open to all religions, all denominations.”

“We just want kids to have a place to be kids and not have to worry about anything but being who they are right now —playing board games, the piano, to just do what kids do.”

For David Green, 13, it’s a place to learn leadership skills and to discover his voice, with the aid and support of adults.

“I’ll text you to remind you of the next (Prom Plus) meeting,” O’Keefe tells the eighth grader. Green is both a Fire House kid and president of Prom Plus, an agency partner created in 1991 to offer safe, chaperoned after-prom parties to students after a Crescenta Valley High School student was murdered at an unsupervised post-prom hotel party.

There are other reminders of the need for that support.

A plaque announces the 2012 dedication of “Christopher’s Room” in memory of Christopher McCulloch, who with his friend Blaine Talmo Jr. was killed in 2000 by another youth at Valley View Elementary School.

At that dedication, Aileen Bristow, McCulloch’s mother, said she helped to develop the Fire House because a youth center might have made a difference for her son had one existed when he died, “that maybe when they ran away, they wouldn’t have been in that darkened place,” recalled O’Keefe.

“We have cameras. We have protection here. And that maybe when they ran away, they’d have come here instead,” said O’Keefe.

Another room memorializes Brett Tyler, “one of our kids” who died suddenly in 2017 of a blood clot. “His family donated money to take out the old carpeting and put in our wooden floors,” O’Keefe said. “They donated part of his college money after he passed.”

Despite some rough times the center keeps going, thanks to intense community support and dedicated volunteers, O’Keefe said.

Plans are underway to host a smart-driving school with the California Highway Patrol, and for a financial workshop for students about to graduate and enter college.

“The kids keep me going,” O’Keefe said. “When you’re lost, you can come here. When you need something, you can call us.

“If you need food, we’ve got it. When we had three suicides, everyone came here. When a girl lost her life in a car accident, we had a vigil. We came here. This is where you come. I think it’s because we have open hearts and open arms, with no judgment.”