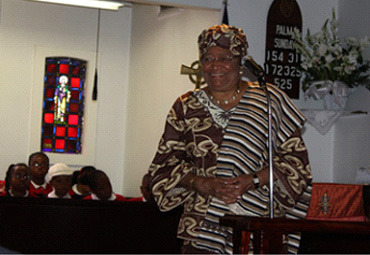 President Ellen Johnson Sirleaf, first woman to be elected head of an African state, pays a visit to St. Timothy’s Episcopal School in Compton. St. Timothy’s, in the Diocese of Los Angeles, is the only Black Episcopal school in the western United States. Photo/Bob Williams

[COMPTON, California] President Ellen Johnson Sirleaf, the first female elected head of state in Liberia and the continent of Africa, told students at St. Timothy s Episcopal School in Compton April 8 to “dream and then go for it—there may be difficulties but stay the course.”

Sirleaf was in California as part of a three-week United States book and lecture tour to promote her newly released memoir, “This Child Will Be Great (HarperCollins, 2009), which describes her own dreams and determination and eventual meteoric rise to the West African nation s top job.

Flanked by local officials and church dignitaries, the mother of four sons and grandmother of seven told a standing-room-only audience in St. Timothy s Episcopal Church that visiting the school was a top priority for her because children helped motivate her to seek the presidency in the first place.

“I said at my inauguration that my greatest joy, my greatest accomplishment would be to make Liberian children smile again,” said Sirleaf, 70, also known as the “Iron Lady.” “If you looked into the eyes of the children, all you saw was despair and disillusionment,” she said of the 14-year civil war that decimated Liberia, which was founded in 1847 by former U.S. slaves.

She described how children became casualties of the civil war, “taught to use guns, taught to kill, taught to destroy, denied opportunities for education” and basic services.

But all that is changing since she took office in January 2006, she told the audience of students, faculty, staff, local officials and parishioners. “When I say I want to make the children smile again, I don t mean just a smile on the face, I mean being able to provide basic things, like education, health services, clean water, lights.

“Now our children are looking like you. They have uniforms. They tote bags; they are going to school,” she said.

“When we turned on the lights in the capital city the children danced in the street. They had never known light that didn t come from a candle. They didn t know water came out of anything but a bucket. Now there are water taps in homes.”

Sirleaf visited the Compton school because her son Robert is friends with a former student, according to Ronald Chatman, St. Timothy s school headmaster. The K-8 school was founded in 1962 to provide a quality education grounded in the Christian faith for families of the parish and others in the community, he added. It has about 90 students and a child care center. It is the only Black Episcopal school west of the Mississippi, Chatman said.

“A former student, from 1967, Robert Presley, met and befriended a very powerful young man, Robert Sirleaf, while studying at the University of Southern California,” Chatman told the gathering. “When he (Presley) heard Robert s mother was coming here, he called me. So, it s important to have friends and always remember St. Timothy s,” Chatman said, amid laughter.

Presley also addressed the students, recalling fond memories of time spent at the Compton school. He said he helped organize Sirleaf s visit with her son, Robert Sirleaf, his best friend, because “I wanted to do something for you, something you d remember for years to come.

Bishop Suffragan Chester Talton of the Episcopal Diocese of Los Angeles offered prayers for “the children of Liberia, of this country , this school. We pray for the lives of children everywhere, for peace.”

Students offered a series of musical selections and oral recitations honoring Liberia, and presented Sirleaf with several gifts, including portraits of the Liberian flag and of the “Iron Lady” herself.

Evion Harris, president of the student body, presented Sirleaf with a $1,000 check to mark a beginning–establishment of a sister school in Liberia. Students also asked questions ranging from class size in Liberian schools to the availability of colleges.

Sirleaf said class sizes are overwhelming and added that she still has much work ahead.

“Enrollment in school is up 40 percent but we do not have enough schools, books or teachers,” she said. “Many of our rural kids, kids like you, are waiting for schools, books and teachers to pursue their education.

She said Liberia has several institutions of higher education including Cuttington University, an Episcopal college located 120 miles north of the capital city, Monrovia. It is the oldest private co-educational four-year institution in the country, and “the best,” she declared.

Sirleaf s memoir tells the story of her birth in central Monrovia in 1938, marriage at 17, and eventual divorce. She has said that one of her priorities is to change the image of Liberia from that of a failed state to one that is emerging as a beacon to the world.

She attended the College of West Africa in Central Monrovia, and holds a master degree in public administration from the Kennedy School of Government at Harvard University. She served as Finance Minister under former President William Tolbert’s administration until he was assassinated. She was imprisoned when she ran for political office against Tolbert’s successor. She left the country but eventually returned. In 2007, she was the recipient of the U.S. Presidential Medal of Freedom, the highest civilian honor bestowed by an American president.

During her United States visit, she is also scheduled to appear on National Public Radio; the Tavis Smiley Show and at Yale University, among other engagements.

On Wednesday, she focused on hope and priorities.  “I can say the children are beginning to look like you,” she told St. Timothy s students. “They have opportunities like you. They have great aspirations, for a life that is peaceful, for a life that provides the simple things. To have freedom … to travel, to come places like this and see you.

“I will go back and tell them I’ve met you and they were just like you. They can be like you. Our country is committed to giving them a better future.”

–The Rev. Pat McCaughan is senior correspondent for The Episcopal News.