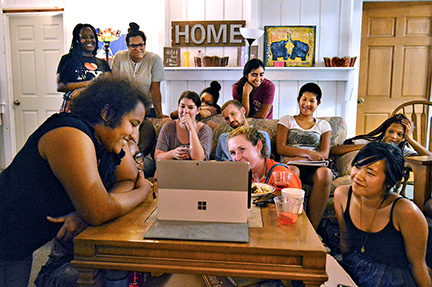 Interns from the Jubilee Service Corps gather in their new digs at a bungalow in Echo Park, near the Cathedral Center of St. Paul. Photo / Payton Hoegh

After college graduation and various internships, Siobhan O’Brien, 24, still was seeking “something more, something interactive, to help me grow and develop” when she applied for the Episcopal Urban Intern Program (EUIP) in Los Angeles.

“I liked the idea of intentional community,” O’Brien told The Episcopal News during a recent water playtime at the Delaney Wright Fine Arts Preschool. As part of the internship, she is helping out at the school, located at St. Stephen’s Church in Hollywood.

“I wanted an interactive year, and everything about Jubilee Service Corps attracted me to it,” said O’Brien, who hails from Warwick, New York, a rural community. “I hope to develop a clearer sense of what I want in the future, and to live more simply.”

She joins 13 other corps members in the 2018-2019 class; young people who are taking a year to discover “what it means to live a life not about you, but about serving others,” according to EUIP director and alumna Mavis Bortey-Fio.

They are two men and 12 women, from California, Mississippi, Michigan, Illinois, New York, Texas, North Carolina, Ohio, Malaysia and South Africa. “They identify as Asian, Asian-American, African, African-American, Latino and Caucasian and all have some type of experience with volunteering or leadership,” Bortey-Fio said.

Junmey Wang, 24, said she became a corps member to put into practice what she’d learned in theory during undergraduate studies at Messiah University in Central Pennsylvania.
“I am very much interested in pursuing justice,” Wang told The Episcopal News recently. She is serving at the Interfaith Refugee and Immigration Services (IRIS) in Atwater Village and said she hit the ground running when she arrived.

“This isn’t making coffee runs,” said Wang, who grew up in Kuala Lumpur, Malaysia. “This is jumping right in, with people willing to support you and teach you all that you need to know and learn.

“I was looking for avenues to meet and connect with people who are not like myself through the work that I would be doing,” added Wang, who treasures the support she receives from other corps members at their residence associated with St. Stephen’s Church, Hollywood.

“I was interested in living in community with young people who also have the same sorts of drive and passion that I do but might not necessarily know what to do with it.”

She added: “At work you meet people and you see situations you might not necessarily be able to change. Having that kind of support in the house makes it a lot less lonely for me.”

EUIP is part of the Jubilee Consortium, a nonprofit collaborative of Southland Episcopal churches formed in 2001 to improve the health and well-being of residents of Los Angeles area communities.

The program expanded this year to include an additional residence, the bungalow adjacent to the Cathedral Center of St. Paul that formerly housed Project New Hope, according to the Rev. Canon Jaime Edwards-Acton, consortium executive director.

He and other volunteers labored in stifling summer heat; painting, carpeting and adding a kitchen and two and a half baths to the bungalow.

Six corps members and two alumni will live on the premises. Also located there will be satellite offices for the diocesan Interfaith Refugee and Immigration Service (IRIS), and for Sacred Resistance, the diocesan Sanctuary Task Force. Other corps members and alumni will live either at the Hollywood residence or at another associated with St. Mary’s (Mariposa) in L.A.’s Koreatown.

Throughout the year, corps members will serve at a variety of area agencies, as well as such diocesan ministries as IRIS, Seeds of Hope, Hillsides, Neighborhood Youth Association, and with the diocese’s development office, according Payton Høegh, a 2009 class member and EUIP facilitator. Other employment locations include St. Joseph’s Center, Safe Place for Youth, Open Temple Synagogue, and Community Space in Venice.

Some interns, like O’Brien, may serve in a variety of capacities at several agencies. Besides the preschool, she will assist with the St. Stephen’s Seeds of Hope garden and with social media for the Sacred Resistance Task Force and the Jubilee Consortium.

Edwards-Acton, who was a member of EUIP’s 1991 inaugural class, said that in recent years the program has also expanded to provide opportunities for corps members who have completed their year of service, but want to continue living and serving in the Los Angeles area. They are allowed to stay on in EUIP housing for reduced rent.

“We’re trying to ease them into the reality of living and working in Los Angeles,” said Edwards-Acton, who also is rector of St. Stephen’s, Hollywood. “They still pay below market rate for rent and have support services that are connected to the program. It’s a way of the next step of their adulting out of the program.”

EUIP works through an exchange: nonprofits and other agencies pay a fee and receive qualified, college-educated entry-level employees, and corps members gain valuable work experience. EUIP provides them with a stipend, communal housing, transportation, insurance and other benefits, “everything they’re going to need.

“In addition, they have a yearlong learning curriculum around social justice and enterprise themes. Often corps members are equipped to work full time in their service agencies at the end of the year,” Edwards-Acton said.

“It’s a super-intense year,” agreed Bortey-Fio, a 2012 alumna. Now, as director, she experiences a bit of déjà vu aiding the corps members’ struggle to navigate their new roles and living arrangements.
“I was a shopaholic before I came out here,” chuckled Bortey-Fio, 28, who hails from Connecticut. “I had come from college, an experience that was all about me.

“There, I got to pick my classes, friends, even where I worked. But this (EUIP) was completely out of my control. I had real adulthood budgeting challenges, and for the first time, a role in an organization where it mattered if I didn’t show up.”

After the program ended, she earned a master’s degree in international development and worked in a nonprofit agency, before being wooed back a year ago to serve as director.

Factored into the intensity are also contemplative moments, where corps members are asked to reflect on and receive feedback about their circumstances.

“There are lots of big and little crises,” Bortey-Fio said. “Last year, one of the corps members lost her mother. We had bedbugs. That was the worst. It’s difficult and really rewarding. A corps member emailed a reflection to me that consisted simply of an emoji of poop,” Bortey-Fio recalled.

There is group and individual spiritual direction, opportunities for worship and each corps member is expected to give two hours weekly to a church, which could include serving at Laundry Love or helping out with the Jubilee boxing class. “Not all [corps members] are Christian and not all are Episcopalians,” she said.

Southland congregations may support corps members by offering food, household goods and other items, inviting them for meals and other events, “by just being their family while they’re here,” she said. “They can help by doing things families would do — cooking, showing them around, offering them rides.”

For Bortey-Fio, the year of living as a corps member didn’t bring any substantive conclusions, instead raising more clarifying questions. “I worked at NYA,” she recalled. “It was the first time I had ever done anything like that.

“It was a year of discovery, that I think I’m good at this, at teaching. I found that, the more hands-on experience you have in this program, the more you realize what’s for you and not for you, where your strengths lie and what kind of populations, based on your strengths, you should be serving.”
Class orientation began Aug. 6 and included one of three retreats for corps members during the year.

They break for the Christmas holidays; in between there are barbecues and outings and a dinner at Bishop Suffragan Diane Bruce’s home.

Seated in her basement office at St. Stephen’s, the walls tagged with names of former youth group members, Bortey-Fio said she and co-facilitator Høegh are “custodians, mothers, fathers, friends, the cool auntie and uncle” but “when it needs to be all hands on deck, it’s all hands on deck.”

Ultimately, the year of living as a corps member is life-changing, she said.

“This is not a typical internship where you’re folding papers and stuffing envelopes. The reason you’re at this place is they have a need and if you can’t meet it, it’s on you.

“You can come out of this year with a family of weird people you never would have been friends with. Or, you can walk away from this program with nothing, no spiritual relationship with me, or Payton or your partner congregation,” she said.

O’Brien agreed. She said the initial move-in to the then yet-to-be-furnished bungalow was a bit rocky.

“There was no WiFi. We were living out of suitcases. The air conditioning broke. The front door didn’t close all the way.”

But a ‘Go Fund Me’ page elicited a rapid response from Southland congregations.

That response quickly smoothed over the rough edges. “The whole place is fully furnished now,” said O’Brien. “The generosity shown us is incredible. It shows how strong a community and committed people can be. It’s a testament to how great a year it can be.”

She added, “Mavis, Payton and Jaime are great. It’s going to be an adventure. There’s going to be times when it’s really hard, but we’ll be stronger people for it.” 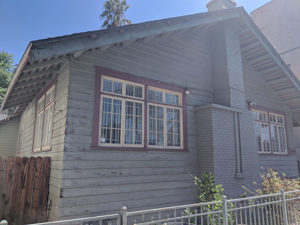 The bungalow two doors from the Cathedral Center, former the home of Project New Hope, now houses six interns, and will soon be the site of an IRIS refugee service center and offices for Sacred Resistance.

In addition to the intern corp members, the Echo Park bungalow soon will house an Immigrant Support Services office, administered by IRIS (Interfaith Refugee and Immigration Service) and Sacred Resistance, an immigration justice ministry of the Diocese of Los Angeles.

The program, which will provide legal services to the low income immigrant community, is made possible by a contract with the California Department of Social Services.

“IRIS will utilize its expertise in refugee case management to work with volunteers to help provide pastoral and social support to refugee and immigrant families,” IRIS director Meghan Taylor told The Episcopal News. “Our hope is that this will be a safe and welcoming place for all refugee and immigrant families to be strengthened, supported, and stabilized. We may not be resettling as many refugees as we would like due to restrictions the current administration has placed on the resettlement program nationwide, but that doesn’t mean that we are going to stop living out our calling to welcome the stranger. It just means we need to do a little tweaking to our programming to be responsive to the current needs of our community.”

According to Taylor, the program will initially be served by a part time, on-site EUIP intern.

For more about the legal services center, contact Taylor at mtaylor@ladiocese.org or call IRIS at 323.667.0489.