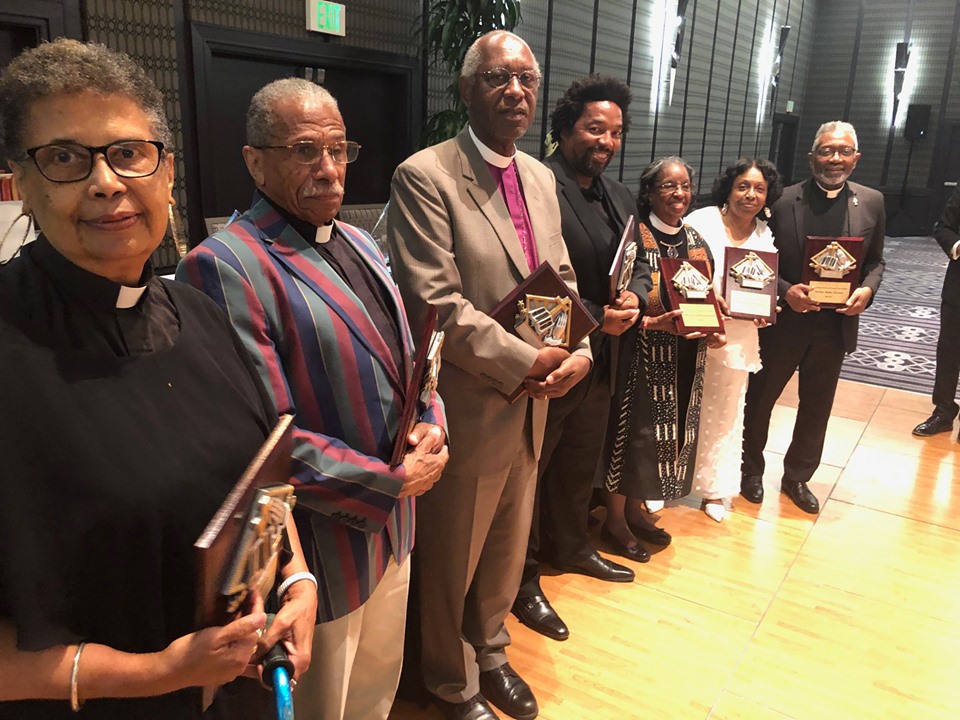 For the Rev. Canon Jamesetta Glosson Hammons, chapter president, the gathering was an opportunity to renew established friendships, create new ones and to meet face to face those with whom she prays regularly on the racial justice organization’s weekly Tuesday phone-in prayer line.

“I’ve been going to the UBE national conferences since 1982, and I’ve been to almost all of them. It’s a family reunion,” Hammons told The Episcopal News. “I started going because I needed to be fed and to see brothers and sisters that looked like me. I needed to be fed with the music coming from the Black Baptist church and so I found that when I attended, no matter what city we were in, what diocese, we had our own special reunion.”

UBE is the Episcopal Church’s oldest and largest advocacy group, according to outgoing churchwide president Annette Buchanan. Supported by the local chapter, diocesan congregations, deaneries, volunteers and the western regional conference, this was the group’s first gathering in Los Angeles in three decades, and its 51st annual business meeting and conference.

During the meeting, themed “Preparing the Way for Such a Time as This: Many People, One Lord,” attendees enjoyed daily Bible study and worship, and observed the 400th anniversary of the arrival of enslaved Africans in what would become the United States.

The Rev. Guy Leemhuis, deacon at Holy Faith Church in Inglewood and a conference co-chaplain, was elected a national vice president at the July 25 business meeting.

Hammons was joined by her six-year-old great-grandson Roman Caraway and great-niece Kayla Glosson, 13. Along with some 30 other youth and young adult attendees, she said, they were “right up front next to Episcopal Church Presiding Bishop Michael Curry” during a dazzling July 24 service at All Saints Church in Pasadena.

During the service, which included performances by the Episcopal Chorale, local musicians, dancers, and singers, Curry called for voter education and registration drives and told youth “we must help America find its soul” (see story on page 8).

As part of the youth and young adult conference track, Roman and Kayla composted waste food, harvested jalapeños and cilantro, and made salsa during a service project at St. Stephen’s Church in Hollywood. Youth and young adults also enjoyed outings to Six Flags Magic Mountain and the California African American Museum, and a bus tour of Black Hollywood.

During that tour, Eddie Anderson Jr., son of the notable acting and musical talent who became famous as Jack Benny’s sidekick Rochester, surprised youth by joining them on the bus, according to Suzanne Edwards Acton, chapter vice president and a conference co-dean.

“This is powerful. I want to thank you for knowing your history,” Anderson told the youth. “This bus used to come, or something like this used to come years ago, when I was a kid and it kind of freaked me out. At that time, they would let everybody out of the bus and I remember peeping out the window, seeing about 400 people in my yard.”

Anderson told the group that his father, who died in 1977, specified that after his death his spacious mansion in the West Adams district of Los Angeles should become a rehabilitation center for at-risk and homeless substance abusers.

Overseeing that effort has allowed him to “obtain at least 10 houses for the homeless. Over the past 25 years, I’ve housed over 10,000 homeless people.” Some have gone on to become doctors, lawyers, and entrepreneurs, he said.

For the Rev. Walter Johnson, deacon emeritus of St. Thomas the Apostle Church in Hollywood, “it was an honor” serving at the opening worship at St. John’s Cathedral, at which retired Los Angeles Suffragan Bishop Chet Talton celebrated.

“I’ve always wanted to be a part of a service at the cathedral and this was an honor for me to read the gospel that particular Monday night,” Johnson told The News.

“I was really surprised when about 40 people from my parish showed up for that service. It was a real honor being there and serving with the bishop who ordained me a deacon, Chet Talton.” 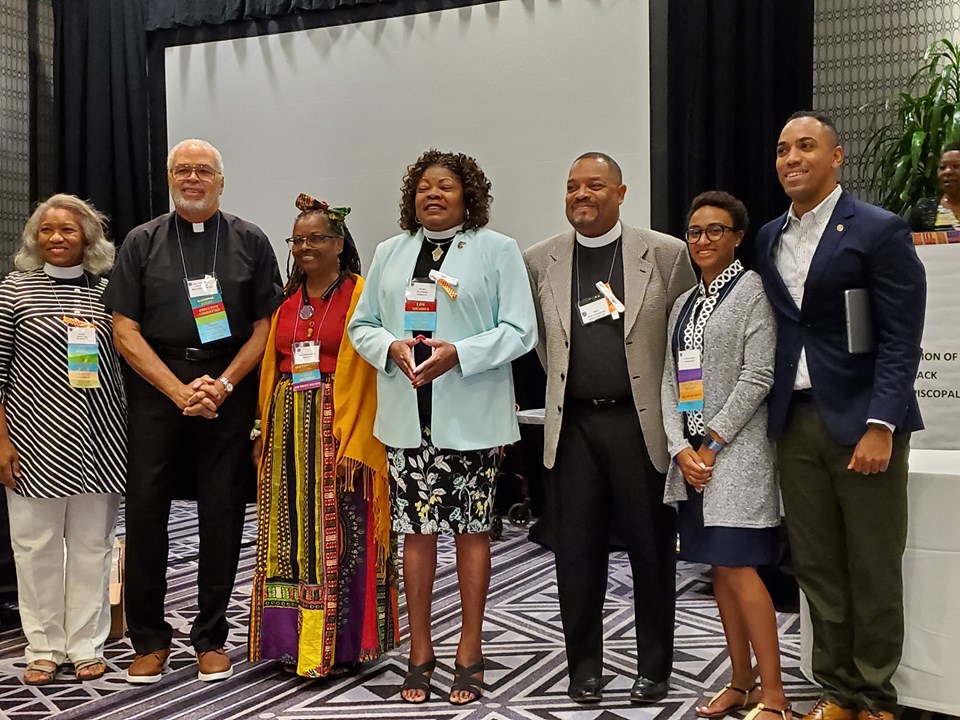 Like Hammons, Casey Jones, 26, a campus missioner at St. Michael’s University Church in Isla Visa, felt “energized, renewed, excited and connected” by the conference, his first.

“One of the challenges of being on the west coast as an Episcopalian is diversity — not to say that the diocese does a poor job of it, but there’s always more to be done,” Jones said.

“In Santa Barbara, there is not a Black community within the Episcopal Church and it’s a struggle. When I’m out here most often, I am the only one (Black person) and so it’s always good to be in Los Angeles and to participate in the chapter.”

He said that joining more than 300 attendees from Central and North America, the Caribbean, and the United Kingdom “was that much more of a great experience.

“It has me thinking hard about what it means to be a Black Episcopalian and about commitments to justice, racial reconciliation, training, and Black leadership, both lay and ordained,” he told The News.

It inspired him to “really think about what ministry looks like for Black students and solidarity for the Black community in Santa Barbara, where most [Blacks] have been pushed out. And the UCSB campus, where there are students of color who don’t feel their voices and religious traditions are honored — how do we make space for them?”

A conference plenary about Black Lives Matter, led by Melina Abdullah, chair of the Pan-African Studies department at the California State University at Los Angeles, challenged him to “think about what the Santa Barbara chapter of Black Lives Matter looks like and what are we called to do” including supporting the L.A. chapter. It includes “all of the work Black folks are doing within our community to strengthen a sense of resolve and resilience in Santa Barbara,” he said.

Edwards-Acton and others said the group is grateful for a tremendous show of support from UBE’s western regional chapter, local diocesan congregations, deaneries and individual volunteers, as well as Bishop Diocesan John Harvey Taylor and Bishop Suffragan Diane Jardine Bruce, who attended the conference and are UBE lifetime members. Taylor hosted a reception for clergy at the bishop’s residence.

Byrd told the gathering that his office, in conjunction with Bishop Bruce, had recently “hosted our first convocation of East Africans here in the Los Angeles diocese. It is our intent and strategy, as we go forward, to convene more.” He is also planning an upcoming training, “Healing from Internalized Oppression,” Sept 13 – 14, at the Cathedral Center, he said.

Crafting the conference to share west coast community activism was intentional, including themes of immigration reform, the Black Lives Matter movement and other issues, Leemhuis said.

“We wanted to share specifically what type of community service and social justice opportunities there are on the west coast,” he said. “We have been working hard to have our young adults and youth more engaged.”

Conference worship and his workshop on multicultural liturgy, Leemhuis said, focused on “how we can do liturgy that spans across the diaspora and in different languages and to be vibrant and still maintain an Episcopal identity.”

The real message, he said, is: “Do you want our children to come back to church. Do you want people to feel like they belong to your church?”

He added, “One of the things I was most pleased about was the All Saints, Pasadena ,service which was, with the exception of a couple of songs, contemporary gospel, yet still felt like an Episcopal service. A lot of people noted that this is how you do this.”

A big takeaway at the local level was: “We have to remind ourselves not to believe the hype, that we’re one-size-fits-all. We have to start recognizing that we’re not all the same and that we can learn about our differences and come together around our commonalities.”

Also celebrated were five African American women bishops, including four who were consecrated within the last year, as well as Bishop Curry and Central American Archbishop Julio Murray, who attended the gathering.

It also highlighted the need to cultivate a new class of young clergy, Leemhuis said. “For our diocese, given the low, low number of Black people who are being developed for the clergy, we have got to come together,” he said. “We are going to have to be responsible for making it happen. We are our solution.”

Echoing other chapter members, he added: “I’m heartened by the fact we have the support of Bishop John Taylor, Bishop Suffragan Diane Bruce and people with a vested interest that we are family and need to work together to make sure we have a diverse diocese at all levels. The conference allowed us to gather and fellowship to get ready for that.”

“We are so energized by the level of support we received from our bishops, congregations, deaneries, St. John’s Cathedral and All Saints Pasadena for hosting worship and receptions, as well as the reception at the bishop’s residence. We are very proud of our diocese.”