They’ve come from Canterbury and reached their destination: a hilltop in the Santa Monica Mountains, where visitors on the first Sunday of autumn marveled at panoramic views from downtown Los Angeles to Catalina Island.

“Noah” window from Canterbury Cathedral’s Ancestors of Christ series is on display at the Getty in Los Angeles. Photo/The Getty Trust

“These six pilgrims have gone a very long way in old age,” noted Canterbury Cathedral Dean Robert Willis, speaking Sept. 22 of their journey. “They will come back bringing the air of your wonderful culture.”

In fact, so old are these travelers that they have ties to Methuselah. That is because the “pilgrims,” six near-life-size panels of stained glass on loan to the Getty Center from Canterbury Cathedral, are among the Ancestors of Christ windows dating from the late 1170s and attributed to the “Methuselah Master,” the now-anonymous artisan who also crafted a similar masterpiece rendering of the Old Testament ancient, the longest-lived person in the Hebrew Bible.

While panels depicting Noah (of ark fame), Thara (father of Abraham), and Jared (father of Enoch) were among those given leave to travel to their first-ever overseas exhibition, the Methuselah window, understandably, was deemed too old and priceless by conservators to share the journey, Willis said. Part of the cathedral’s south-transept window, the panels have been temporarily removed for masonry repairs.

Tracing the windows’ history, Willis noted that Archbishop Thomas Becket’s murder in Canterbury Cathedral – on Dec. 29, 1170 – preceded the creation of the glass by less than a decade, adding that the 12-century panels remain part of the cathedral’s ongoing and very contemporary role of story-telling.

Willis’s lecture, titled “Canterbury: 14 Centuries of Community and Creativity,” drew sustained applause after his tracing of relationships between “iconic moments of sharing journeys and cultures” reaching from the days of Chaucer’s fabled tales to the present as international visitors (more than 1 million per year) include seminarians and clergy who participate in an extended residential study program.

Arriving from Africa, Asia the Americas and elsewhere, the modern pilgrims share their stories with Canterbury colleagues specially trained in the arts of listening and hospitality, Willis said. Aiding this exchange within the cathedral precincts, a unique lodge has been built on the site of structures destroyed in the World War II Baedeker Blitz, when men with shovels saved the cathedral by lobbing explosives of its roof.

Willis attributed the depth of these exchanges to Canterbury’s long “settled community,” where people may explore ideas and disagree with one another, yet return to collegiality and common prayer. Such community also affords space “to tell your story to yourself,” another significant part of pilgrimage, he noted. 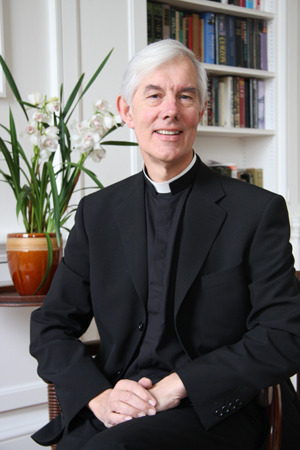 Capping his lecture, Willis praised the Getty Center for widening the experience of pilgrimage to the many thousands expected to visit the exhibition while on view through Feb. 2, 2014. Titled “Canterbury and St. Albans: Treasures of Church and Cloister,” the exhibition also features illuminated pages from the St. Alban’s psalter, on loan from the Cathedral Library in Hildesheim, Germany. Temporarily unbound for documentation and conservation, the pages will be rebound in the near future, experts say.

Willis added that his journey in relation to the exhibition has included visits with local Episcopalians, including parish groups from nearby St. Matthew’s, Pacific Palisades, and All Saints’, Beverly Hills. He also received the greetings of the bishops of the Diocese of Los Angeles and the co-deans of St. John’s Pro-Cathedral.

Willis paid tribute to his colleague, the Very Rev. John Hall, dean of Westminster Abbey, who had preached that morning at St. James in-the-City, Los Angeles, whose parish choir became the first from the United States to sing in concert with the choir of Westminster Abbey, returning again to London in 2006.

In his sermon, Hall underscored the common ties and experience that bind Anglicans and Episcopalians worldwide and are “far greater” than what may divide. He also pointed to Pope Francis’s affirmation of Christian faith that seeks to be welcoming and embracing. 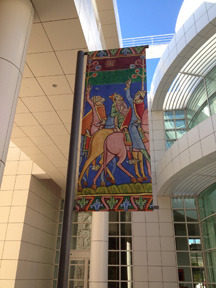 Hall’s Monday-evening Getty Center lecture, titled “Westminster Abbey: For Ever New,” was set to highlight art and architecture of the present church, which dates from 1245, after the abbey’s origins in 960.

Among the 325 attending Sunday’s Canterbury lecture were Los Angeles Episcopalians, including well-known vestment designer Cliff Chally, a verger at St. James, who praised the exhibit for its “beauty, superb layout and the unexpected bonus of being able to see the glass up close” rather than high up at the clerestory level.

“As someone who lives in a culture that is based on planned obsolescence,” Chally said, “I was most inspired by how much energy, time and care is going into preserving the heritage of our church.”

Medieval period scholar Pamela Mellott, parishioner of Holy Trinity Church in Covina, said, “The exhibition illustrates how – in the 12th century – light wrestled dark and the mighty was in tandem with the miniscule.”

She added: “When I walked through the darkened entrance to the exhibition, I immediately found an almost breath-taking contrast in the lights emitted through the ancient paints, which are still profoundly blue, red, yellow, green, still telling their stories.

“You are in the 12th century here.  In the first room everything about Canterbury Cathedral is life-size: the figures depicted in glass as well as the photo-mural of a portion of the cathedral in the corner of the room. One gets the feeling of simply stepping into its garden,” Mellott said.

“Displayed under glass, the St. Albans Psalter entices the viewer to close study; it surprised me to find that many faces had been depicted with individual expression or facial features. The art, church doctrine, and the imagination are all illuminated here.”

St. John’s Pro-Cathedral Dean Mark Kowalewski concurred with the power of story reflected in the exhibition: “These windows not only tell a story, but have become part of a story. They are really touchstones, aren’t they?”

He added that cathedrals and all churches, like the Getty exhibition, share unique roles as “performative spaces in which art and music and the spoken word bring narrative alive. Our story meets the great story of our faith, and that long story becomes our story.”

— Robert Williams is canon for community relations in the Diocese of Los Angeles.