Wilshire Boulevard — L.A.’s well-known 26-mile thoroughfare — began as a path across a barley field owned by Henry Gaylord Wilshire, a real-estate developer and ardent socialist who gave the city land for the roadway with the proviso that it bear his name and remain free of railroad or commercial truck traffic.

Wilshire’s friends called him by his middle name, also given to the Gaylord apartment building still standing across from the old Ambassador Hotel site, all part of the fashionable 35-acre development that Wilshire launched in 1895 to extend west from Westlake Park. 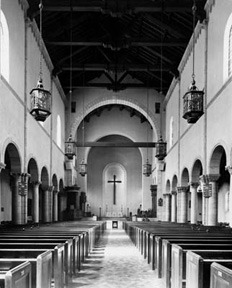 Various residents who came to live in the new subdivision included parishioners of St. Paul’s Episcopal Pro-Cathedral, and when the cathedral itself relocated just north of Wilshire Boulevard, its new Romanesque sanctuary proved a “perfect match” for the Murray Harris organ transported from Old St. Paul’s wooden sanctuary.

“Always part of the organ’s success at St. Paul’s Cathedral was the beautiful acoustical environment provided there for the instrument,” recalls organ builder Manuel Rosales, who surmises that — on the way to this new setting — the Murray Harris probably dodged its first brush with potential demise.

“The organ was begrudgingly moved to the new cathedral because, candidly speaking, the builders couldn’t afford a new one,” said Rosales. “Rather, they put a new console on it, pretending there would be an even grander organ one day. That did not happen, thankfully.”

“Any organ sounds only as well as the room will let it,” said Gordon Bachlund of Monrovia, who sang in the cathedral choir of men and boys from 1954 to 1966. “The voicing of the organ was a perfect match for the cathedral’s acoustic.” Bachlund recalls the Murray Harris as “a true English romantic organ that can do anything you ask of it. It had a way of being equally supportive to many kinds of music.”

Rosales added that the merit of Murray Harris craftsmanship was understood by many over time, including Mrs. Leland Stanford, who, sparing no expense, had selected the same builder to provide in 1901 a “Rolls Royce” of an organ for Stanford University’s Memorial Church.

Dedicated on July 13, 1924, L.A.’s new 1,200-seat cathedral was designed by a team including Bishop Joseph Horsfall Johnson’s son, the prominent Southland architect Reginald Johnson, among whose landmark designs are also All Saints’ Church in Pasadena, the Santa Barbara Biltmore hotel, and L.A.’s Good Samaritan Hospital, where All Souls’ Chapel continues today as a scale model of the Figueroa Street cathedral.

According to one news report, the cathedral, “in its decorations combines the past with the present in an especially happy manner. The architecture is of the Romanesque, the European style between the Roman and the Gothic. The windows of the nave depict the development of the church by showing scenes form the lives of its bishops, beginning with St. Alban, the British martyr, and ending with Bishop Johnson laying the corner-stone of the cathedral here.”

The chancel was furnished with impressive new woodwork including the traditional bishop’s seat, the cathedra, carved by a craftsman also active with the Oberammergau Passion players. The new pulpit was given in memory of Arthur Letts, founder of the Broadway and Bullock’s department stores, who had died the previous year. His legacy contributed to the development of the historic Bullocks Wilshire specialty store opened in 1929.

Meanwhile, further west on Wilshire Boulevard – which past Western Avenue was then little more than an unpaved road through dairy farms and bean fields – plans were taking shape for construction of the current St. James’ Church, completed in 1926 at the corner of St. Andrew’s Place and consecrated during the tenure of Bishop Johnson, who died two years later in 1928.

Johnson’s successor, Bishop W. Bertrand Stevens — who held the diocese together through the Great Depression and welcomed visitors to St. Paul’s Cathedral for events including the 1932 Olympics — visited St. James’ Church regularly, and his times there included pastoral meetings with Japanese-American Episcopalians in the context of World War II. Stevens’ own episcopal chapel was L.A.’s Church of the Advent, where acclaimed vocalist Nat King Cole, an Episcopalian, sang in the choir. Later, in 1965, Cole’s funeral was held at St. James’ Church, located near his home in Hancock Park.

Meanwhile, in the same five-decade span, the Murray Harris organ was played at St. Paul’s for milestone occasions, including the funerals of Bishops Johnson (1928) and Stevens (1947), the installation of F. Eric Bloy as dean and later his consecration (1948) as bishop diocesan, the thanksgiving services at the end of World War II, the visit of Archbishop of Canterbury Michael Ramsey, some 40 annual meetings of Diocesan Convention, and on Nov. 24, 1963, the Sunday on which the nation mourned the assassination of President John F. Kennedy two days before.

Camaraderie between the congregations of St. James’ Parish and St. Paul’s Cathedral grew when the Rev. George Barrett served the former as rector from 1947 to 1963, and the Rev. John M. Krumm, the latter, as dean (1948-52). The two became lifelong friends as well as bishops; Barrett of Rochester, N.Y., and Krumm of Southern Ohio. In Los Angeles, their lenten preaching series alternated between St. James’ and St. Paul’s.

Barrett is one of three St. James’ rectors to be elected bishop from the parish. The second was Ivol Curtis, who became bishop suffragan of Los Angeles in 1960 and later diocesan of the Seattle-based Diocese of Olympia. The third is Kirk Smith, now bishop of Arizona, who as rector of St. James from 1991 to 2003, played a key leadership role in incorporating the cathedral’s Murray Harris pipe work into the new Falconer Memorial Organ at St. James in 1995.

Both St. James’ and St. Paul’s congregations also came to share a common a connection with the international and British Commonwealth communities in Los Angeles. At St. Paul’s, annual Commonwealth services were carried out with precision under the direction of Frank K. Owen, the cathedral’s much-respected choirmaster from 1953 to 1974.

Longtime choir member Bachlund recalls Owen as “a solid musician who performed with dignity and artistry.” Bachlund, whose father assisted in bringing Owen to Los Angeles from Kalamazoo, Michigan, joined the cathedral choir two years after graduating from high school in 1952, continuing through 1966, and returning from Vietnam for an “unforgettable” choir tour of England in 1967. The choir sang at St. Paul’s Cathedral, London, and at Exeter and Lincoln cathedrals, with Dr. Gerald Knight, then head of the Royal School of Church Music, presenting each L.A. chorister with the RSCM medal.

“Frank was a master of his craft,” Bachlund said. “He ran a tight ship in terms of the choir. He managed to get the best out of the boys in the choir, and the men whom he hired. He created brilliant church theater, if you will. When one deals with the liturgy sensitively and knowingly, one is creating theater in the church, which is much appreciated because of its positive impact on the congregation. If the service is cohesive – and musical, and done with artistry – it leaves an impression.”

Bachlund said he came to appreciate the cathedral organ “through Frank’s musicianship. I have warm thoughts about the organ, and these are associated with Frank Owen.”

Owen even assisted in repairing the organ, instructed by Richard Muench in re-leathering, “maintaining the organ in a cost-effective way,” Bachlund said.

Maintenance became a serious issue for the organ and the entire cathedral by the late 1960s and early ’70s. This challenge increased exponentially after Tuesday, Feb. 9, 1971, when the 6.6-magnitude Sylmar earthquake rocked the Los Angeles basin, damaging the cathedral and requiring the closure of some of its interior areas pending further seismic evaluation.

Said Rosales: “By the time I came into the picture, with my business partner David Dickson, there were serious issues of deferred maintainance.

“At St. Paul’s, the organ had so many missing stops. An organist was obligated to turn on two or three additional stops to achieve certain tones. It was a very awkward way to ask organists to play,” Rosales said.

“Yet, even at the end of the cathedral functionality, when the building had no heat and was in terrible disrepair, people still loved the sound of the organ.

“I can remember exactly how the organ sounded at St. Paul’s,” said Rosales, noting that the same stops of the original Murray Harris still can be sounded in the new installation at St. James’.

Next week: To conclude in Part 3: How the organ did not end up at Dodger Stadium, reflections from organists Carol Foster and James Buonemani, and how the pipe work was reconfigured at St. James’ Church.

— Bob Williams is diocesan canon for community relations and convenor of the Diocesan History Project.