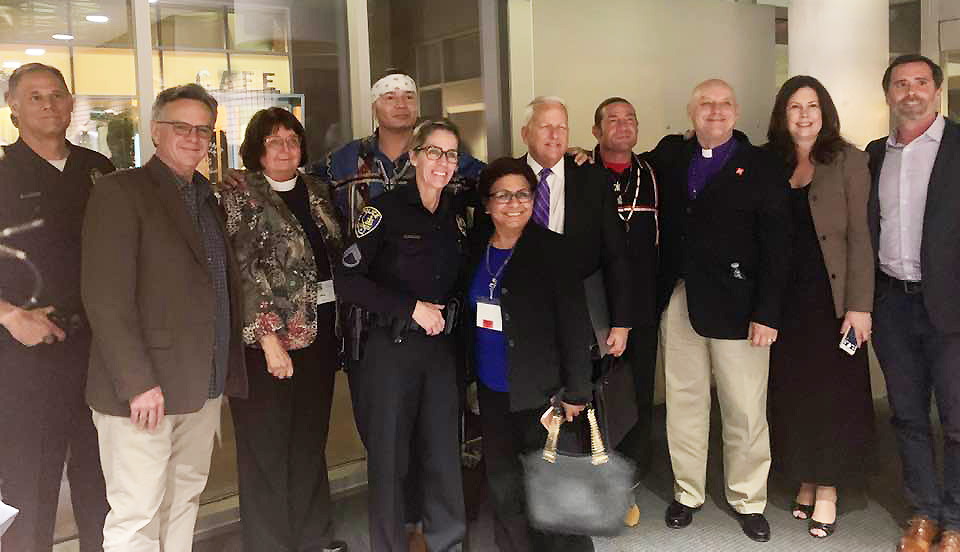 Los Angeles Bishop John Taylor and about 30 clergy – in Riverside for a May 6 – 8 diocesan clergy conference – attended the meeting in a show of support for the project, an attempt to help alleviate homelessness in the city.

“This project is an expression of the Gospel and a harbinger of our abundant future for our whole diocese,” Taylor told The Episcopal News after the vote. “The Holy Spirit will care for institutions that care for God’s people. This is our faith. Thanks to the vision of Bishop Jon Bruno and the Rev. Canon Mary Crist … there is resurrection at St. Michael’s.”

Crist, who is the priest at St. Michael’s, said she was thankful to clergy colleagues and community partners alike for their support, calling the approval a “team effort.” 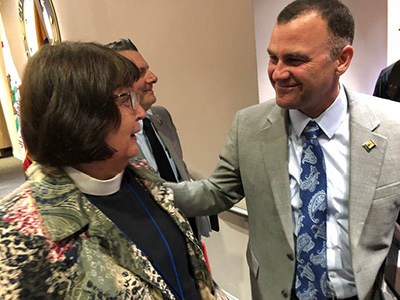 When she arrived in 2012, St. Michael’s was no longer functioning as a church, but had maintained an ongoing homeless ministry, she said. Located at 4070 Jackson Street, it is near two community parks where homeless people frequently congregate.

Eventually, after prayer, listening and serving, the ministry has flourished and the community is vibrant, she said, and excited about the prospects of hosting affordable residential housing.

Michelle Davis, Riverside Housing Authority Manager, said the city urgently needs such affordable housing. Homelessness has increased by nearly 20 percent in the city, to 449 in 2018 from 368 in 2017, she said.

Still others, like the working poor, are vulnerable to becoming homeless. “The disparity between income and the cost of rent also prices many people out of the housing market,” she said.

The St. Michael’s project grew out of the urgent need for affordable housing, the city’s ‘Housing First’ policy, and Mayor Rusty Bailey’s ‘Love Your Neighbor’ initiative, she said.

‘Housing First’ connects homeless individuals and families to permanent supportive housing without any preconditions. Once they have secured permanent stable living quarters, they are assisted with case management and other services to ensure housing stability and prevent a return to homelessness, according to Davis.

Through the ‘Love Your Neighbor Initiative’ (LYNI), Bailey appealed to the faith-based community, galvanizing a coalition of 70 organizations to seek affordable housing solutions, she said. LYNI has set a goal of ending homelessness in the city by 2025.

“Through the Mayor’s leadership and outreach effort, the initiative seeks to increase local giving, expand the available housing stock, and create highly trained volunteers in order to address homelessness in Riverside by actively engaging with faith-based organizations,” according to documents provided by Davis.

Developers for the $17 million St. Michael’s project are Community Development Partners, whose founders share 30 years’ experience dedicated to social change through community development and investment. Since 2011, CDP has successfully built a portfolio of 19 unique projects comprising more than 1,400 units and $300 million in total development costs.

Mercy House, founded in 1988 in Santa Ana, offers extensive services to homeless individuals and will provide case management and other services to residents upon project completion.

St. Michael’s Project will include 24 units of permanent supportive housing for area homeless individuals who earn at or below 30 percent of the area median income, or the 2018 federal poverty guideline of about $14,150.

The project will also include 25 units for low-income individuals and families earning no more than 80 percent of the area median income, along with a property manager’s unit.

The two-story structure will also include case management offices, flex space for educational classes, and a community garden. Plans also call for establishment of a committee, consisting of area residents, St. Michael’s and Mercy House staff, to help ensure the facility’s smooth operations.

Crist said a next step in the process includes securing final plan approval, adding that she does not foresee any challenges in securing the approval.

Statewide, homeless has become a human rights issue. In February, 2019, California Governor Gavin Newsom sued the city of Huntington Beach to compel it to support construction of more affordable apartments and houses.

Newsom put other cities on notice that he aims to hold them accountable for failing to provide adequate affordable housing to residents. During his campaign, he pledged to speed up construction of housing units, aiming for the state to build 3.5 million new units by 2025.

In Riverside, Mayor Rusty Bailey jokingly told those voicing support for the St. Michael’s project not to “argue with a yes.”

He called the meeting a “divine appointment” because the diocesan clergy conference was being held just a few blocks away, while the fate of the project was being decided.

“We need the faith-based community to provide a sense of urgency” because addressing homelessness is not something that government can do by itself, he told the gathering.

Other funding sources, like the state’s ‘No Place Like Home Program’ will be sought to complete the project.

The Rev. Deborah Bush of Faith Community Church told the council to remember the children and families impacted by homelessness when considering their vote.

“What we forget sometimes is that ‘the homeless’ also includes children, who come into classrooms worried about where they are going to sleep that night … who are sleeping in cars,” she said. Absenteeism in California schools has reached astronomical rates, often due to homelessness of families, she said.

Victor Beecham, outreach manager for Path of Life Ministries, an organization serving those impacted by poverty and homelessness in Riverside, said he felt “compelled to be here” to offer support for St. Michael’s project, much-needed but a long time coming.

“Homelessness has reached epidemic proportions for the state, for our nation,” he said. “There are people without a key to a door, a light switch, who cannot lay down in comfort, who worry about being attacked in the street; women, children. We can make them one step closer to being a productive member of society.

Taylor praised Crist’s outreach and efforts to gain the cooperation of neighborhood residents, who had initially resisted the project, saying she eventually won them over.

Crist said that currently, meals are served at St. Michael’s Monday through Friday from 11 a.m. to 1 p.m., Saturday from 8 a.m. to 9 a.m. with a 5 p.m. Wednesday bible study, and a Holy Eucharist on Thursdays at 5 p.m. followed by dinner.

“It’s a fun ministry,” she said, adding that she loaded a small altar, bread and communion wine and other elements in the back of a truck and held Easter worship in the parking lot of a local fast-food restaurant, because the church itself had been rented.

Crist said she hopes to break ground on the housing project by November of this year.