The documentary, which premiered Jan. 30 at the Beverly Hills Laemmle Fine Arts Theater, tells the story of Los Angeles County’s shift from “the biggest farming community in the U.S.” to one where millions regularly experience food insecurity. Following the screening, Alderson joined other experts for a panel discussion.

It aired Feb. 6 on KCET-TV, Southern California’s public television station. “I’m excited,” Alderson said of the project. “It’s a really important documentary, and it will become a six-episode web series that will live on KCET’s website.”

With blossoming partnerships, plans to train master gardeners and horticultural therapists, development of a ‘Seeds of Hope Toolkit’ and the launch of a faith-based diabetes prevention program, Alderson has a lot to be excited about these days.

Some of the results of their efforts:

“We define ‘food justice’ as universal, affordable access to basic nutrition,” said Alderson. “Our commitment to food justice has become an essential part of our identity in this diocese.”

Aware that 2.5 million people in the metro area, including 1.5 million in Los Angeles county alone, are food insecure — meaning they do not know where they will get their next meal — actor-turned-film director Raphael Sbarge wanted to make a film to move people to hope, vision and action.

He also hoped to inspire viewers “to understanding, so that we can bring compassion to an issue that is not going to go away. It has to be faced head-on, and we have to find solutions,” he told The Episcopal News.

Then he met Tim Alderson at an orchard gleaning where volunteers were recovering oranges to be donated to food pantries.

“I had known the story of food waste, that 40 percent of our food is thrown away. It’s horrifying,” recalled Sbarge, best known for his roles as Archie Hopper/Jiminy Cricket in the Once Upon a Time television series and Kaidan Alenko in the Mass Effect video game trilogy. Between 2014 and 2016, he portrayed Inspector David Molk in the TNT series Murder in the First.

“I had a picture of a story I wanted to tell, and there was Tim, absolutely charming and delightful, a wonderful storyteller,” said Sbarge, who has directed two previous films; Is There Hope for Planet Earth (2014) and A Concrete River: Reviving the Waters of Los Angeles (2015)). He also founded the nonprofit foundation Green Wish, an environmental grassroots organization that helps fund local community projects.

Alderson’s story “of growing up as a young person on a farm until now, being a purveyor of all this land through the church that is being used as a way to feed people who don’t have access to food,” embodies the county’s shift from the largest farming community in the U.S. to one where millions regularly experience food insecurity, Sbarge said.

“We’re still the food bowl in the United States, but we are a city so synonymous with concrete and freeways and buildings, it’s hard to imagine that it was not that long ago,” Sbarge told The News.

“Tim is part of a movement — and not just a movement, but maybe a consciousness-changing army of people who really want to make a difference by taking real action. That’s what’s so inspiring about him.” 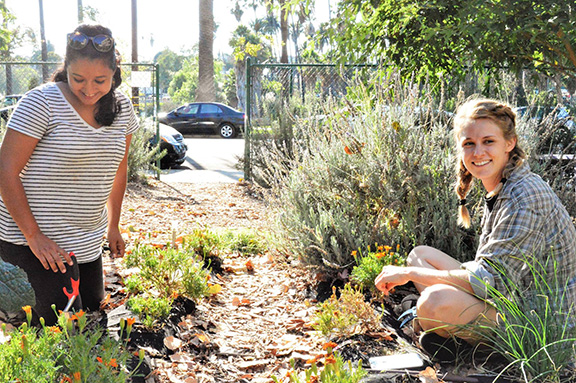 Elyse Wegner of the Seeds of Hope staff (right) and a volunteer work in the Edendale Grove garden next to the Cathedral Center in Echo Park (Los Angeles).

Seeds of Hope already collaborates with a host of community partners, marshaling human and environmental resources to assist in educational and gardening efforts. That includes student interns from the Cal State Los Angeles, Northridge and Pomona campuses, as well as UCLA, USC, and the Episcopal Urban Intern Program.

The diocesan food justice ministry also incorporates volunteers from partner agencies like Big Citizen Hub, a 22-week youth empowerment program, and Food Forward Los Angeles, which fights hunger by rescuing or gleaning fresh food and giving it to food banks.
“They recover perfectly good food that would end up in the waste stream and divert it to people instead of the landfill. We have become their most strategic partner because of our ability to take the food they recover and distribute it far and wide,” Alderson said.

The gleaning happens at farmer’s markets, orchards and across the Southland and is yielding enormous quantities of produce for delivery to food pantries. Another collaboration is planned, said Alderson: “We are working with them on a grant proposal with CalRecycle, to help the diocese build some distribution infrastructure [such as] cold storage.”

Master Gardeners to be trained at the Cathedral Center

In 2019, the UC-Cooperative Extension Los Angeles will locate its master gardener training program at the Cathedral Center.

The 13-week course will run from February through May and teach a range of topics, from soil management to how to prune a fruit tree, plant a vegetable garden and care for trees, according to Rachel Surls, sustainable food systems advisor, who directs the program.

Students will have an opportunity to receive hands-on training at Edendale Grove, adjacent to the Cathedral Center, and other Seeds of Hope gardens. Graduates will receive a certificate, commit to at least 50 hours of volunteer service, and typically function as a community resource.

“Many of our master gardeners are focused on food security and helping the community grow their own food, and become sustainable” which makes the partnership especially important, Surls said.

The course helps positively affect household food budgets, Alderson said. “It’s a lot cheaper to grow food than to buy it at the grocery store.” Plans to offer a Spanish-language curriculum are also in the works.

“We have three master gardeners on staff already, two of whom are Spanish speakers,” Alderson said. “And a third will be taking the training this year.” 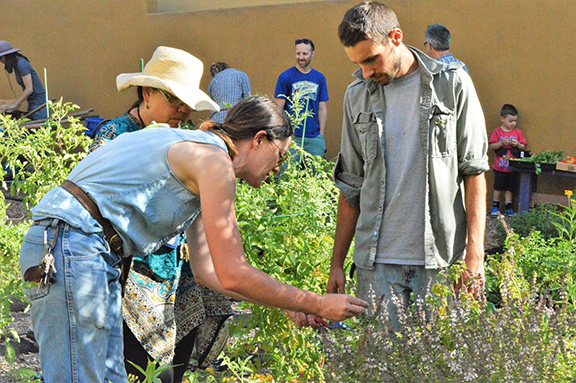 Through a Kaiser Foundation and county health department grant, Seeds of Hope has been providing garden-based education to low-income communities at 37 sites throughout Los Angeles County, Alderson said.

“At each of those sites we have taught nutrition in the context of growing and cooking, how to eat healthier and learning how to prepare food. They get to watch us cook it and then they get to eat it. Over 11,000 people attended the classes just this past year.”

Ashley Crosswhite, 35, says Seeds of Hope is a perfect partner to embark on an initial nine-month pilot horticultural therapy program, because of the food justice ministry’s track record in nutritional and other education “and exposing people to a variety of ways we can access and use food.

“Horticultural therapy is a good match for that because it can help relieve stress or anxiety, or elevate moods; it’s a great physical activity and is adaptable. It can meet people where they are.”

She is developing the program, which like music or art therapy, “would use people-plant interactions to meet a person’s goals for health and wellness; and could be social, emotional, cognitive, physical. The main point is that you’re using plants or plant material to help clients or participants meet those goals.”

A program underway at Blessed Sacrament Catholic Church on Sunset Blvd., “has seemed to work really well with people who are homeless or recently housed,” Crosswhite added. “We’ve been doing classes there and helping to create a garden space at Edendale Grove for people to come and interact and harvest.”

‘Roots of Hope’ – a faith-based approach to diabetes prevention

Seeds of Hope received certification in October 2018 for “Roots of Hope,” an innovative approach to diabetes prevention, by “leveraging existing trusted relationships within churches and aligning health and nutrition education to the core tenets of a shared faith tradition,” Alderson said.

It was developed in conjunction with City of Hope and the Centers for Disease Control and Prevention as part of the National Diabetes Prevention Program or “National DPP.”

National DPP is a partnership of public and private organizations working to prevent or delay type 2 diabetes. Partners work to make it easier for people with pre-diabetes to participate in evidence-based, high-quality lifestyle change programs to reduce their risk of type 2 diabetes and improve their overall health.

Roots of Hope has been piloted at St. Mark’s, Altadena and St. Luke’s, Monrovia. “The program expands upon the garden-based nutrition education program that Seeds of Hope has offered across Los Angeles County,” Alderson said. “It will run for one year in these two locations as we learn from experience and perfect our model. After that, the intention is to expand the program to all interested parishes in our diocese, as well as to other dioceses across the country.”

Additionally, “Seeds of Hope has become a recognized thought leader in the worlds of urban agriculture and public health,” Alderson said. “We were commissioned by the USDA to create the “Seeds of Hope Toolkit: A Guide for Conducting SNAP-Ed Programs in Faith-Based Settings.”

“This was motivated by their enthusiasm for our innovative approach and the desire to help others around the country to replicate our success. And, of course, my participation in the LA Foodways documentary is an example of this as well.”

To learn more about Seeds of Hope, visit its website here.