Sharing our freedom: thoughts on immigration 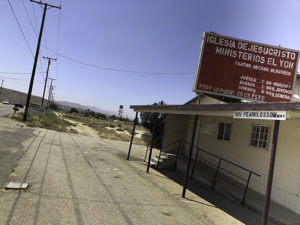 Iglesia de Jesucristo is a small Spanish-language church in Littlerock, California. Its motto is “Todo lo puedo en Cristo”; in English, “All is possible in Christ.”

Setting out several weeks ago for my annual late-summer driving trip (five states, about 2,000 miles, with lots of beautiful vistas, good music, and frank talks with Jesus), I steered along Pearblossom Highway between Palmdale and Victorville and thought about my visit to the high desert just a few weeks before.

With eight colleagues from the L.A. faith community, the Rev. Canon Jaime Edwards-Acton and I had the opportunity to visit the Adelanto detention center. For generations, our government has refused to enact sensible, humane immigration reform. For political advantage, the current regime ruthlessly scapegoats immigrants and asylum seekers. Adelanto, where thousands of our siblings are herded around in prison suits while awaiting hearings or deportation, is a direct and an appalling consequence of these civic sins.

Only recently did I learn that a member of one of our churches had probably been incarcerated at the time of our visit. We may even have seen one another without realizing we were Episco-pals. As a young woman nearly 30 years ago, fleeing abuse and violence in her native country and experiencing profound trauma, she married a criminal, who led her into breaking the law herself, for which she was imprisoned. It is not unlike the story that, thanks to Kim Kardashian West, momentarily thawed Mr. Trump’s heart and earned another deserving Christian a pardon.

Since then, our fellow churchwoman remarried, raised a family (including two acolytes) in the church, trained for and practiced a serving vocation, and paid her taxes. She’s not a citizen, though, so under the government’s current zero decency policy, she was arrested, jailed, and, just last week, deported. If you knew her whole story, if you sat in her living room and looked her husband and children in the eye, you’d say to our leaders: For the love of God, have mercy.

In the hope that her family will be able to reunite in a more hospitable country, we’ve been asked to keep the details vague. But pray for a lamb of our own flock, a sinner of Christ’s own redeeming, for now safely at home with family members in the country she left behind because she had the audacity to believe in the promise of the American dream.

During my vacation, I lavishly claimed the promise of freedom that is being systematically denied to our sister and so many others. I’ve been going wherever I want (“Dinosaur tracks ahead on left”? Oh, joy!) and trying to tune out the news, which, for a newshound, isn’t easy, especially in recent weeks.

But while we’re counting scandals, let’s remember the ones that reap the greatest misery. Instead of enacting common-sense reforms, our government and its private contractors operate a shameful archipelago of nearly 1,000 adult detention centers such as Adelanto. Some 565 children, including 24 under the age of five, have still not been reunited with their parents. Our DACA siblings, who only know the home of the brave, await a welcoming word from just a few leaders with courage.

Along the road to Victorville, you’ll see several small Spanish-language churches. I stopped outside one in Littlerock, pastored by the Rev. Hector Ocegueda. Él dice: “Todo lo puedo en Cristo.” I would like us to match that absolutely true statement about the power of faith with some earthly hope for the victims of an un-American immigration system that has surely run its course. We are better than this. But God would like us to stand up and act like it.