The Congregation of St. Athanasius at the Cathedral Center of St. Paul celebrated its patronal festival and 150th anniversary on May 2 with a 5k walk-run; dedication of its new parish garden, part of which takes the form of a living la​byrinth; and a special service that incorporated music from the Andrew Lloyd Webber–Tim Rice musical Jesus Christ Superstar. 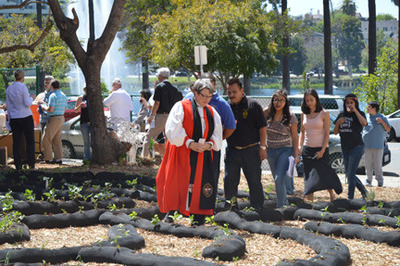 Parishioners and friends gathered in the morning to run or walk a course that touched on all five sites at which the first Episcopal congregation in Los Angeles carried out its ministry beginning in 1865.

The first site was the Merced Theater, which stands where a saloon once hosted the first Episcopal services read in the rough frontier town of Nuestra Señora La Reina de los Ángeles. The walkers, led by Robert Williams, canon for community relations and diocesan historiographer, and a few runners, led by Bishop Suffragan Mary Glasspool, then proceeded to Spring Street, where the first permanent St. Athansius Church was built; then to Pershing Square, where the ProCathedral of St. Paul once incorporated the St. Athanasius congregation; and to Figueroa Street and Wilshire Blvd., where the Cathedral of St. Paul stood from 1923 to 1980. From there the groups trekked up to Echo Park and the present-day Cathedral Center of St. Paul, where St. Athanasius’ congregation still carries out its ministry under the leadership of the Very Rev. Canon Frank Alton, provost, and the Rev. Lorenzo Lebrija and the Rev. Yein Esther Kim, assistant priests. Participants raised $2,200 to support the parish’s food bank program.

In the afternoon Bishop Suffragan Diane Jardine Bruce dedicated the parish’s new garden, “Edendale Grove,” sponsored by the Seeds of Hope program and planted on the lot next to the Cathedral Center building. Part of the new garden takes the shape of a labyrinth, eventually to be delineated completely in food-producing plants. The Jesus Christ Superstar Mass wrapped up the day’s activities.