An Episcopal congregation that built a handsome English Gothic church and filled it with a notable series of stained-glass windows, nurtured the man who founded the World War II Navajo Code Talkers, harbored a Polish refugee family and endured for nearly a century without its own parking lot celebrated its final Eucharist on June 10 with sadness, but also with pride for its long history of ministry. 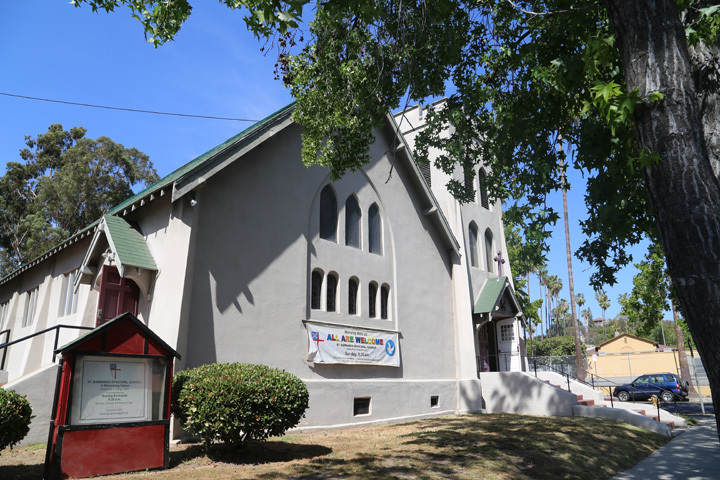 Declining membership and a lack of funds forced the closure of St. Barnabas’ Church as a regularly worshipping congregation, although the property, located at Chickasaw and Caspar avenues in the Eagle Rock neighborhood of Los Angeles, will remain as a diocesan facility that will serve the neighborhood with ministries yet to be determined.

“The people and leaders of this historic parish have served faithfully and well for many years, loving and caring for their neighbor, comforting the sick, baptizing and burying, laughing and crying, and participating in eternal Resurrection,” Bishop John Harvey Taylor told The Episcopal News.

“Their individual pilgrimages in Christ have not come to an end even as the parish, as currently constituted, ceases active ministry. We have no plans to sell the church or its properties. Instead, we will listen for word from the Holy Spirit, through which all things are being made new.”

The Rev. Canon Lynn Jay, who with a team of clergy has led the congregation since the departure of its last rector about four years ago, reassured assembled members that ministry in some form would go on at the church they have loved.

For example, Jay said, the preschool that has long used classrooms in the parish house will continue at St. Barnabas’.

“The rectory is being used as a sober-living house,” she said. And there’s a little house around the corner that they own, a little yellow house, that’s being used as a counseling center — so the building’s being used. And the parish hall’s lovely. There are two kitchens, one downstairs and one upstairs.” The facilities are in need of repair, she added, but could certainly be renovated and used by other ministries.

Jay and her team, which for the past few years has included two priests — the Rev. Lucinda (Cindy) Voien and the Rev. Dorothy Torrey — and a deacon, the Rev. Dina Fulgoni, have done whatever they can to help St. Barnabas’ remaining members look forward to joining other congregations. The most likely destinations, Jay said, are St. Mark’s Church, Glendale; Church of the Angels, Pasadena; and All Saints Church, Highland Park (Los Angeles).

“I feel sad,” she said. “My daughter is fourth-generation here and that makes it very hard.

During her childhood Morgan was a member of the children’s choir and the parish’s chapter of Girls Friendly Society. “I pretty much grew up here,” she said. In more recent years, Morgan has been a vestry member, clergy of the vestry, junior warden as well as senior warden at St. Barnabas.

The remaining members, she said, are mostly over 65. “I’m one of the youngest,” she noted.

“We just don’t have the money any more. We can’t support a priest,” she said.

“This is a group of people who have loved each other for a very long time, and they love their parish church,” said Voien, who has assisted at St. Barnabas’ while also serving a congregation in Bakersfield, in the Diocese of San Joaquin. “This is the only church I’ve ever served where every single person walks out of the sanctuary and into the coffee hour. Nobody blows it off. Sometimes people go out to breakfast together.

It’s likely, she said, that the members will find ways to continue their fellowship even if they join different congregations. “I think if they do end up worshiping in different places, there may be a lunch bunch that will get together — another way of renewing friendships,” she said.

A century of service

St. Barnabas had its beginnings in the early years of the 20th century as a small group of Episcopalians who met in a Masonic temple in Eagle Rock under the leadership of the Rev. William E. Mason, whose successor, the Rev. Robert Renison, led the congregation to financial security and mission status in the Diocese of Los Angeles. In 1915 they built a small frame church at Norwalk Avenue and Ellenwood Drive.

Already outgrowing their small church by 1920, the congregation bought a parcel of land nearby. Architect William Major designed a Craftsman Tudor-style rectory, and by 1924 the new church itself was built and welcoming worshipers.

The next year the congregation suffered a tragedy when Renison, its vicar, was struck by a car and killed while crossing a busy street. His youngest son, the Rev. George Edward Renison, left his parish in Missouri to take over his father’s work in Eagle Rock. He was succeeded in turn by his son-in-law, the Rev. Samuel Sayre, husband of his daughter Marjorie.

During Sayre’s 22-year tenure, the congregation built a two-story parish hall with classrooms, the rector’s office, two full kitchens and a choir room, in addition to a sexton’s cottage. The only amenity it lacked was a parking lot — for the church’s entire history, parishioners have had to compete for street parking on Sundays with parishioners from the much larger Catholic church a block away.

Sayre also led efforts to install a series of stained-glass windows, created by Judson Studios, depicting the life of Jesus. The windows are included in an index of Judson’s finest artistic creations. Some 30 years later, the original craftsman, John Rundstrom, oversaw the restoration of those windows, which had been damaged by wind, sun and rain.

One of St. Barnabas’ parishioners during Sayer’s tenure was Philip Johnston, a son of missionaries to a Navajo reservation who after their retirement settled in Eagle Rock and joined the parish. Johnston, a World War I Army veteran, had grown up speaking the complex unwritten Navajo language, and during World War II it was he who suggested to a general of the United States Marines that Navajo might be the basis for a code the enemy couldn’t possibly break. The result was the now-famous Navajo Code Talkers, who are credited with helping the Allies win the war.

During the 1980s, the congregation sponsored a Polish refugee family that had been expelled from the communist nation for political activism. Marek and Anna Wojitas and their 7-year-old daughter Annetta were established in the renovated sexton’s cottage, where they lived for two years with support from the parish until they were ready to rent an apartment nearby.

In the 1990s, led by the Rev. Alan Scarfe, ninth rector, the congregation joined with other Eagle Rock churches to establish a nightly feeding program for the poor and elderly of the area. Scarfe also introduced the concept of “total ministry,” a lay training program, to the congregation, and eventually to the diocese. Scarfe was elected in 2002 as bishop of Iowa, where he still serves.

Subsequent rectors have included the Rev. Tom Discavage and the Rev. Fran Cantella, a former parishioner who studied in Scarfe’s ministry formation program and was eventually ordained to the diaconate and priesthood. She retired in 2014.

Historical material for this story was drawn from “Affectionate Memories of St. Barnabas,” written by parishioners.