Seventh-grader Jessica Cruiel can’t wait to get her hands on science this summer during a special Neighborhood Youth Association and St. Matthew’s Parish School science camp. 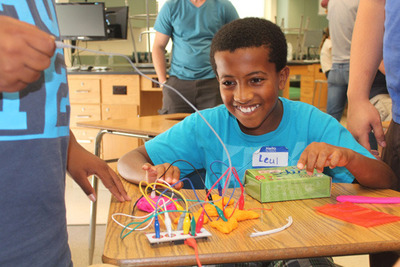 “I heard we’re going to be building robots and I’m pretty excited about that,” said Cruiel, 12, a student at Palms Middle School in Los Angeles.

“I don’t do good in science in school but it is like my second favorite subject. I am hoping this will help me next year,” added Cruiel, who joined NYA in September.

The Pacific Palisades school has teamed up with NYA, an institution of the Episcopal Diocese of Los Angeles that serves about 200 at-risk youth aged 8-18 and their families in various neighborhoods throughout the city, to provide the camp.

“The genesis of the program is that St. Matthew’s reached out to NYA through its Lucas Scholars Program; we have a long history of a relationship,” said NYA Director of Education Randy Hirt.

St. Matthew’s will host the weeklong sessions, providing staff, programming, meals and transportation for about 25 sixth to eighth grade students to and from NYA’s center in Venice, Hirt said.

“The reason this program fits in with NYA is we already do a lot of hands-on learning projects, robotics program, experiential learning at the site, so it’s a natural partnership,” Hirt said.

In its second year, the Lucas Scholars Program (LSP) is made possible through the generosity of St. Matthew’s Church parishioners Ann and Bill Lucas, also longtime supporters of NYA. Last year, the school worked with the Boys and Girls Club of Venice, according to St. Matthew’s teacher Kate Sauerhoff. Its mission is to inspire students to positive academic excellence.

“This year’s theme is ‘codes of life,’ so it’s going to be focused on computer coding, robot coding and a little bit of DNA as an important code and we’re even going to try to decode some Shakespeare. We have a teacher who just visited the Globe Theater and will bring some of his curriculum to us,” said Sauerhoff who will participate as faculty.

“It’s a really intensive one week, full-in experience for the students,” she added. “This year, we’ll be using Arduino boards. It’s a mini-computer and students will use them to learn how to program and make robots,” Sauerhoff told The Episcopal News.

The Arduino is an open-source electronics prototyping platform based on flexible, easy-to-use hardware and software, typically used by artists and designers for creating interactive objects or environments.

The collaboration “is a great thing to do during the summer because a lot of summer learning programs are very expensive and this is completely free. We’re just hoping that this becomes a real keystone of our community; our connection with NYA and building a relationship with them is so important for both communities,” Sauerhoff said.

On the final day of the camp, siblings and extended family members will be invited to a graduation ceremony, exhibition of the completed projects and a picnic barbecue, she said. “What’s neat is some of those parents get to see St. Matthew’s as a great place to go to school and get to see what they’ve been doing all week.”

In addition to the Lucas Scholars Program, NYA also provides summer programs that extend their school-year leadership skills and young scholar development efforts, as well as including exciting beach, museum, garden and other field trips, according to program director Tanya Jones.

Through local partnerships with Whole Foods, a farmer’s market and other agencies the children will continue learning about growing and eating nutritious food. Youth leaders from older grades will be on hand to mentor younger children, Jones said.

Mark Twain Middle School student Estefani Cruz, 11, joined NYA when she was in fourth grade and said she hopes the summer science session will be as helpful to her as NYA has been.

“The thing I like most about NYA is that it helps me physically, mentally and emotionally when I’m dealing with a problem or I have to think of something school related or having a problem within my family,” she told The Episcopal News in a telephone interview.

“I think that the science camp is going to help me grow, help me do activities that will influence different things, like about science and exploring. I hope that I’ll really enjoy this science camp and I’ll thank the church for giving us this amazing opportunity.”