In a surprising rollercoaster of a day, 10 Muslim students –arrested for heckling the Israeli ambassador to the United States during a speech at the University of California’s Irvine campus last year — on Sept. 23 were convicted, sentenced and said they will appeal the guilty verdict. 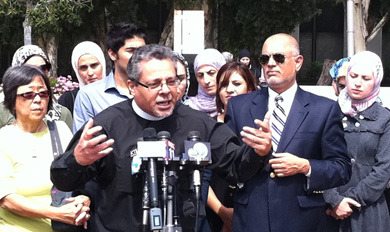 The Rev. Wilfredo Benitez, rector of St. Anselm of Canterbury Episcopal Church in Garden Grove, addresses supporters of the Irvine 11 after the guilty verdict. At left is Cathy Masoaka of Nikkei for Civil Rights and Redress; at right is Shakeel Syed, executive director of the Islamic Shura Council of Southern California, an umbrella group of mosques and Muslim organizations serving over 500,000 Muslims in Southern California. Photo/Pat McCaughan

Gasps and muffled weeping filled the packed Southern California courtroom as a clerk read the unanimous verdicts for the ten defendants: guilty of conspiracy to disrupt a public meeting and guilty of disrupting a public meeting. Each charge carried a possible maximum six-month jail sentence.

Immediately, more than a dozen supporters of the students, known as the “Irvine 11”, angrily walked out of the courtroom, muttering, “This isn’t justice.”

Marya Bangee, a spokesperson for Stand with the Eleven, said she was surprised and saddened by the verdict. “Obviously, this is emotionally devastating for people of conscience. This is going to have repercussions for freedom of speech for every American. But, we’re going to fight this,” she added.

The Rev. Wilfredo Benitez, rector of St. Anselm of Canterbury Episcopal Church in Garden Grove, California, called the verdict “a travesty of justice.”

“This attack against Muslim students and the Muslim community is an attack on democracy,” he said at a gathering of media representatives following the verdict. “It’s an attack on all of those who believe in the U.S. Constitution and in freedom of speech.

“We stand together today,” he added. “The Muslim community is not alone in this. On this day I am a Muslim.”

Bishop Jon Bruno of the Episcopal Diocese of Los Angeles issued a statement after the verdict calling upon “Orange County bishops, rabbis, and Islamic leaders to come together immediately in renewed solidarity to address the issues and injustices raised in relation to these verdicts.

“Our Episcopal congregations will also increase participation in the Shura Council’s Open Mosque Day on October 16 to demonstrate our understanding that Islam is at its core a religion of peace within our shared Abrahamic tradition, and deserving of equal protection under First Amendment freedoms,” he said.

Shakeel Syed, executive director of the Islamic Shura Council of Southern California, an umbrella group of mosques and Muslim organizations serving over 500,000 Muslims, called the day’s proceedings “jaundiced” justice. He saluted the students for having the courage of their convictions and vowed to support their continued struggle.

Just a few hours later, Orange County Superior Judge Peter Wilson sentenced the students to 56 hours of community service and three years probation, to be reduced to one year after completion of the community service.

Before imposing the sentence, Wilson said he considered the students’ “clear records” and that they were “productive members of their respective communities and that … according to the evidence presented were motivated by their beliefs. He also lifted a gag order that had prevented the defendants and attorneys from speaking with the media.

Throughout the trial, prosecutors had maintained that the students had effectively censored Ambassador Michael Oren’s Feb. 8, 2010 speech at the University of California at Irvine (UCI). The defense attorneys had said the behavior of the students—seven from UCI and three from the University of California at Riverside (UCR)—amounted to normal student activism and that arresting them for protesting Oren’s speech constituted a First Amendment violation.

The defendants and their attorneys said they were disappointed and surprised at the verdict, but not deterred. Defendants included: Mohamed Abdelgany, Khalid Akari, Aslam Akhtar, Joseph Haider, Taher Herzallah, Shaheen Nassar, Mohammad Qureashi, Ali Sayeed, Osama Shabaik and Asaad Traina. Charges against an eleventh student, Hakim Kebir, were dismissed pending completion of community service at a nearby soup kitchen.

“This conviction, this jury verdict, should be worn as a badge of courage,” he told a gathering of media representatives outside the courthouse. “They (will) go down in history with great Americans like Martin Luther King Jr. and Malcolm X, who also were convicted for their beliefs, their integrity, and their convictions.”

Attorney Lisa Holder said the students “stand out in a world that has become very apathetic.” She said the defense team will appeal the conviction and expects “to make some changes in the law to make room for this type of dissent, which is valid, which is important and which is critical to our democracy.”

Qureashi told a gathering of media representatives that he would continue to “fight … to be heard. This is not a right that can be taken by a D.A. (district attorney). This is a right given us by God.”

Shaheen Nassar said that while he “respects the court’s decision … I intend to continue my activism, to give a voice to the voiceless, including my cousins who died during the Gaza Massacre and the 1,400 civilians who lost their lives during that massacre as well. May God rest their souls.”

Herzallah urged supporters not to let “this case falter your activism. Make this the platform to intensify activism on Palestine issues in this country.”

Asaad Traina said the students had tried to follow the legacy of civil rights heroes like King and read a quote from the slain civil rights leader that “embodies a lot of what we did that day.”

“Ordinarily, a person leaving a courtroom with a conviction behind him would wear a somber face. But I left with a smile. I knew I was convicted but I was proud of my crime.”

The students shouted at Michael Oren shortly after the Israeli Ambassador to the United States began a Feb. 8, 2010 speech on the UCI campus. Oren had been invited to speak by several UCI groups, including Anteaters for Israel (//www.afiuci.org), and the school’s law and political science departments.

A videotape of the event shown during the trial depicted the students rising in turn and shouting such statements as: “Michael Oren, propagating murder isn’t free speech.” And, “You sir, are an accomplice to genocide.” Following each statement, the student was escorted peacefully from the room, amid both cheering and jeering, by campus security. They were later “processed” –handcuffed, arrested, and fingerprinted, defense attorneys said.

Oren left the podium but later returned. Deputy District Attorney Dan Wagner had argued that the student disruptions prevented him from completing his speech and from participating in a subsequent question and answer session.

The students had objected to the university’s invitation to the American-born Oren, who emigrated to Israel in 1979 and joined the Israeli Defense Forces. He served multiple tours in the Israeli Army including the 1982 invasion of Lebanon. According to a statement by the UCI Muslim Students Council (MSU), Oren is “an outspoken supporter of the recent war on Gaza.”

He “stands in the way of international law by refusing to cooperate with the United Nation’s Goldstone Report, a fact-finding mission endorsed by the United Nations Human Rights Council,” the statement added. “The Goldstone Report accuses the Israeli government of committing war crimes and possible crimes against humanity in the densely populated Gaza Strip.”

Defense attorneys and Irvine 11 supporters believe the students were targeted because they are Muslim.

“We brought witness after witness during the trial who talked about how they protested in a very similar manner” (to these students), said defense attorney Reem Salahi. “None of those individuals were arrested, none of them were prosecuted and so it is strange that these students were selected in the manner they were and prosecuted for protesting in a manner that was peaceful, limited, restricted, not violent, no property damage, no hate speech,” she said.

But Orange County District Attorney Tony Rackauckas dismissed notions that he selectively prosecuted anyone for political or religious reasons and said it was “absurd” to consider the students civil rights heroes.

Rather, he said, the jury delivered a “landmark” verdict that sent a strong message nationwide “that we don’t have to tolerate some small group of people wanting to shut down speeches on a campus or anyplace.”

During a meeting with media representatives after the sentencing, Rackauckas said the case was about the rule of law and that the actions of the students constituted a conspiracy because of the “meticulous planning involved” before protesting Oren’s speech. Oren’s speech was announced two weeks prior to his actual visit, Rackauckas said.

“I thought it was important for them to take responsibility and to … understand that this is a violation of law, a violation of the First Amendment rights of those people who want to have a speaker on their campus and who want to listen to a speaker and have an exchange of ideas.”

–The Rev. Pat McCaughan is a correspondent for Episcopal News Service.