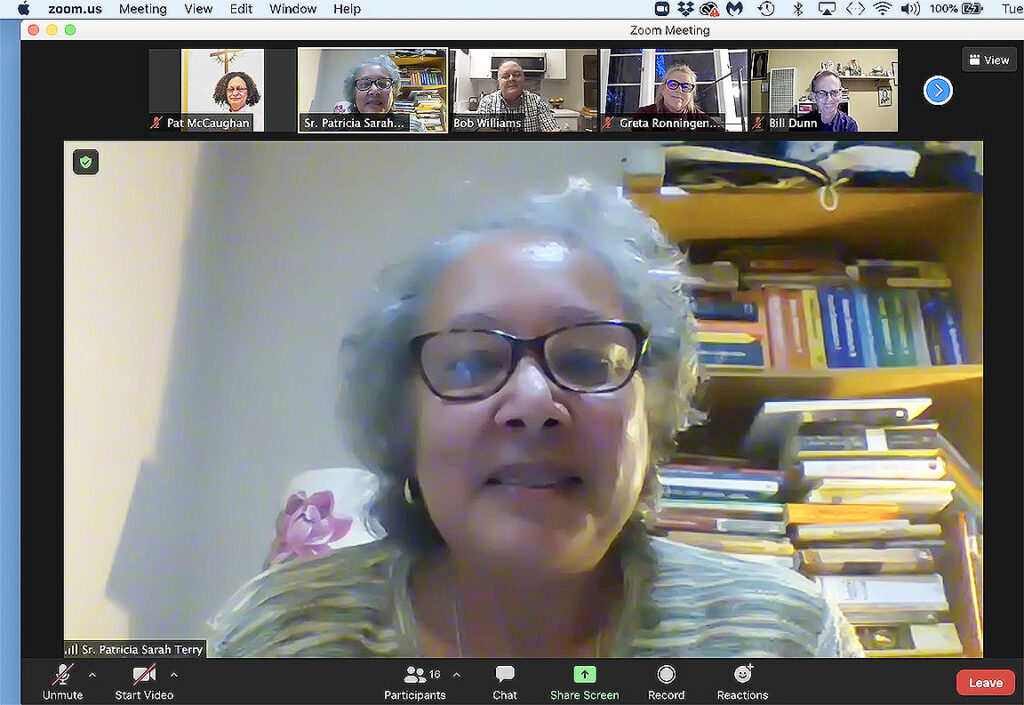 Los Angeles Bishop John Harvey Taylor on Tuesday, April 20 announced Sister Patricia Sarah Terry as the chairperson of the Bishop’s Commission on Gospel Justice and Community Care, a diocesan taskforce whose mission is “to articulate a gospel vision for policing and community care; to assess people’s personal, local experiences of policing and community safety and to advocate for public policy reform that contributes to holistic community care.”

“Attorney and policy expert, a reconciler and a contemplative, with a heart for justice and love – it’s as if Sister Patricia Sarah has been preparing for years to lead this commission,” Taylor said. (See related story here.)

“Everyone has a view about policing in America. Everyone wants our communities to be safe,” he said. “It was a blessing for all of us to be present at her first meeting as chair on the very day of the Derek Chauvin verdict, which many pray is a transformational moment. Whatever happens, our diocese has the leadership it needs, in Sister and all our commissioners, to advocate for a Christ-centered vision of community safety and justice in all the neighborhoods we serve.”

Terry told members during the virtual meeting that listening is key to the commission’s work, through which she hopes to engage the entire diocese and beyond. “We all come to this work with a sense of life experiences we’ve had, wondering how we can possibly make a difference. This kind of work is not something that we really own ourselves. It belongs to all members of all communities that make up this diocese and there are many stakeholders out there.”

Taylor conceived the commission after the May 25, 2020 murder of George Floyd sparked worldwide protests and a national reckoning on police violence and systemic racism. Floyd, 46, died after Chauvin – then a Minneapolis police officer – pressed his knee on Floyd’s neck for 9 minutes and 29 seconds as Floyd lay face down, hands cuffed behind his back. A jury on April 20, 2021 found Chauvin, 45, guilty of unintentional second-degree murder, third-degree murder and second-degree manslaughter.

Education is key to the commission’s work, said Terry. She cited the May 2015 final report of former President Barack Obama’s Task Force on 21st Century Policing. She asked members to familiarize themselves with it and with current local and national legislative reforms.

The group’s report made 59 recommendations, ranging from the immediately implementable (codifying use-of-force policies, collecting data on police shootings) to bigger-picture cultural changes (diversifying police forces, shifting away from what the report describes as a “warrior” mindset to that of a “guardian”).

“These are local, community-based issues and problems, and the solutions have to be developed there. So, the more we understand about what other communities have done, what possible legislation there is, what are the issues, the better. For example, every police department, at least the major ones, seem to have published their police manuals … and there are sections in them on use of force.

“The trial we’ve just witnessed has educated us about the use of force and the duty to come to the aid of someone that’s in your custody. We really need to have a basic understanding of all this” as well as current local and national community policing legislation, she said.

Terry also announced the appointment of chairs to two subcommittees that will function in tandem: one on listening, and another on advocacy.

The Rev. Samuel Pillsbury, a former reporter, lawyer and professor and a deacon chaplain at the Men’s Central Jail, will serve as chair of an Assessment and Articulation Committee whose aim will be to listen to community concerns and the experiences of residents, law enforcement personnel, and others engaging community policing issues.

“I see our subcommittee as tasked with the critical work of deep listening to our Southern California community on matters of race, justice, policing and violence,” Pillsbury said. “Many other persons and entities are engaged in critical work in legislative and institutional reform, and we may be as well, but as followers of Jesus we should be specially committed to hearing the stories of the wounded, whether those wounds are fresh or old. In this country the confluence of race and violence is our deepest and most serious wound. Unless it is attended to emotionally and spiritually, there is no legal or institutional reform that will suffice to meet the needs of justice.”

Similarly, the Rev. Canon Jaime Edwards-Acton, rector of St. Stephen’s, Hollywood, and priest-in-charge at St. Barnabas, Eagle Rock, who will chair the advocacy committee, said listening is key to the commission’s work.

“I was moved and inspired by the comments made today by Minnesota’s attorney general, Keith Ellison, after the jury returned a guilty verdict for Derek Chauvin for the killing of George Floyd, after only 11 hours of deliberation,” said Edwards-Acton, who also is director of the Jubilee Consortium, a collaborative network of Episcopal churches whose mission is to create whole and just neighborhoods through enrichment opportunities and leadership development programs.

“Ellison said that this generation’s work is to transform policing into ‘one that is empathetic, compassionate and affirming,’ following a resounding verdict that has the potential to create a “powerful opening for new relationships and to shed old practices.

“Ellison went on to say that ‘the work of our generation is to say goodbye to old practices that don’t serve us anymore,’” Edwards-Acton said.

“This is the work that the Bishop’s Commission on Gospel Justice and Community Care has to do – saying goodbye to old practices that don’t serve us anymore,” he continued. “Particularly those policing practices that have endangered, traumatized and killed black and brown bodies and those living with mental illness for so long. We can do better, and the Bishop’s Commission is committed to finding a better way. I am honored to be asked to help lead the advocacy dimension of this commission. To me, advocacy involves risk, solidarity and bold action. I am eager to involve and work alongside my sisters and brothers in the diocese to start imagining and creating that better way.”

The commission met first in December and began exploring the question “what is uniquely the role of the Episcopal Diocese of Los Angeles and its congregations as together we assess, articulate and advocate for gospel-based solutions and community safety?”

“There is every reason to believe that we will make a difference,” Terry said. “That the diocese will be able to be an impactful agent of change through the commission and those that we can enlist as part of our extended network and partnerships.”

A retired attorney, she has served at the U.S. Justice Department; the Internal Revenue Service, overseeing litigation of employee benefits plans and managers in tax and bankruptcy court; and as deputy general counsel for policy and regulations at the Pension Benefit Guarantee Corporation in Washington, D.C.

She is a member of the Anamchara Fellowship, an Episcopal monastic community committed to intercessory prayer and service, pastoral care, and spiritual direction. She is a parishioner at St. Cross Church, Hermosa Beach.

In addition to the bishop, chair and sub-committee chairs, participants in the commission’s initial organizing meetings include:

The commission meets virtually at 7 p.m. on the third Tuesday of each month; the next meeting will be held May 18.