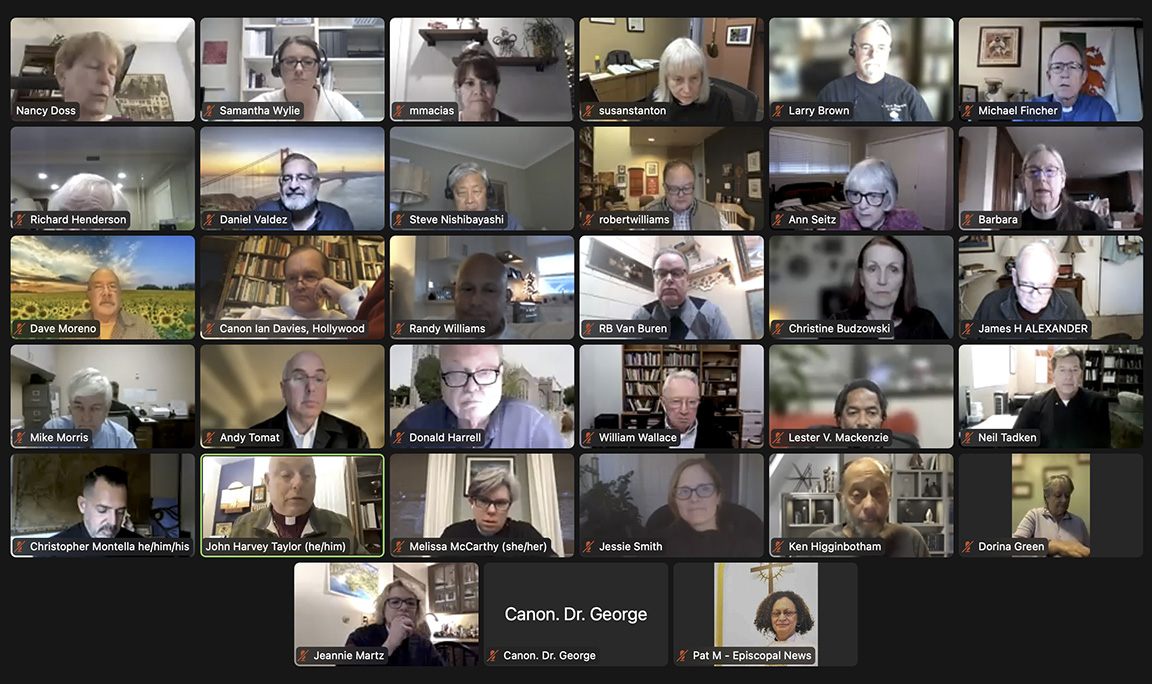 [The Episcopal News] – The “One Body, One Spirit” appeal, which has raised a half-million dollars in grants aiding challenged churches and other diocesan communities, will likely undergo some changes in 2023, Bishop John Harvey Taylor announced at the Dec. 8 regular meeting of Diocesan Council.

“What we’ve decided to do with the annual appeal, which will be a permanent fixture of our life as a diocese, is to have seasonally-based mini-campaigns, like in Advent, Epiphany, Lent, Easter, and so on,” he said. The fund was started in 2020 to aid churches struggling with extraordinary pandemic challenges, and eventually became an ongoing appeal.

Taylor referenced a recent video, recorded during a Nov. 29 official visit in Los Angeles for the Church of the Advent’s centennial celebration, anticipating the next round of grant applications.

Advent greetings – and the Annual Appeal

“Every single dollar we receive goes right back out the door, 100%, to missions and to parishes and other institutions,” to assist with projects typically not included in annual operating budgets. The grants, averaging about $7,500, have enabled “new ministries, programs, and roofs that need to be fixed” and the focus of grant awards may broaden more, he said.

Looking ahead to 2023, Taylor also noted the upcoming Jan. 13 – 16 weekend visit to Los Angeles of Episcopal Church Presiding Bishop Michael B. Curry, as well as a likely increase in churches collaborating creatively on ministry and mission.

St. Stephen’s Church in Beaumont, along with Trinity Church in Redlands, and St. Alban’s Church in Yucaipa, are sharing clergy and ministries, and Canon to the Ordinary Melissa McCarthy “is studying closely how we can find other ways to twin churches and trio churches and create quartets of churches,” he said.

Taylor said that attended St. Stephen’s annual Christmas fundraiser recently, an event that drew more than 100 people. At least two-thirds of those attending were the church’s neighbors and community members, while a third were members. The same event in 2021, raised over $20,000 for local agencies supporting homeless persons, he added. “I offer that as an example of one of the ways the Holy Spirit works to build places up.”

The presiding bishop is going to be busy while in Los Angeles, Taylor also noted. After a Friday, Jan. 13, meeting with clergy, at 10 a.m. on Saturday Curry will ordain five new priests – Stacey Forte Dupre, Timothy Hartley, Ryan Macias, Brian Tucker, and Susanne Wright-Nava – on Taylor’s behalf. Later the same day, Curry will serve as keynote speaker at an already “nearly sold out” dinner in his honor. He will also preach at a “revival style” Martin Luther King Jr. celebration at 3 p.m., Sunday, Jan. 15, at Christ the Good Shepherd Church in Los Angeles.

The diocese just might end 2022 with a balanced budget if congregations catch up with unpaid mission share fund contributions, which rose by $100,000 in October, to $950,000, according to Canon Andy Tomat, diocesan treasurer.

The $9.8 million consolidated 2022 budget represents annual income from the diocese’s three primary operating funds – the Mission Share Fund ($4.25 million); Corporation of the Diocese ($5 million); and the Bishop as Corporation Sole or Corp Sole (about $580,700). The Corp Sole contribution is entirely funded by income, with no withdrawal of principal funds.

Corporation of the Diocese funds come primarily from a combination of government and private grants, mostly for the diocese’s IRIS (refugee/immigration) and Seeds of Hope ministries. In addition to the unpaid MSF contributions, the budget deficit stems from unrealized reimbursements for administrative services to the two grant-funded ministries, Tomat said.

The continued nonpayment of committed MSF contributions, accumulating since 2019, accounts overall for nearly one million dollars in unrealized income. In response, Taylor appointed “MSF missionaries” to meet with and offer support and guidance to congregations in arrears. In November, diocesan convention approved a move to mandatory MSF assessments beginning in 2024, after a yearlong (2023) conversation is held about the need for the change.

Church canons require parishes to contribute 12% of their normal operating income from two years prior to the MSF which, in turn, supports the ministries of more than 30 under-resourced mission congregations and centers in the diocese. On average, parishes are giving at about 9.9%, up from 9.2% in 2021, while missions are giving at the required 10% of plate and pledge income plus 5% assessments, he said.

Additionally, both Taylor and McCarthy have consulted with congregations in arrears to help them determine a way forward, Tomat said.

Some costs savings have been realized through hiring deferments in the bishop’s and finance offices. In 2023, other anticipated costs savings include reform of diocesan employee benefits, and new procedures to collect reimbursements for administrative services to grant-funded programs.

However, if MSF contributions fail to materialize by year-end, “this will be a hit to our very limited unrestricted cash resources which today sit at about $1.3 million,” Tomat said. “Most of that cash came from a recent non-sacred property sale.”

The Rev. Lester Mackenzie reported that at its Oct. 26 meeting the Standing Committee approved five transitional deacons for the upcoming Jan. 14 priestly ordinations, and consented to the Oct. 1 election of the Rt. Rev. Elias Garcia Cardenas, of the Episcopal Diocese of Colombia.

In response to a question, Mackenzie said the Standing Committee is awaiting action from the presiding bishop’s office regarding the Nov. 19, 2022 re-election of Charlie Holt as bishop coadjutor of the Diocese of Florida. Holt’s previous May 14 election was nullified because of procedural objections.

Christine Budzowski, president of the diocesan Episcopal Church Women, reported the do-it-yourself coloring United Thank Offering boxes were a huge success at the Nov. 11-12 diocesan convention in Riverside, and that $407 was collected in support of UTO’s mission and ministry.

UTO starter kits are also available “for any parish or congregation that was not aware of the UTO ingathering and would like to get started.” Tammy Smecker-Hane, diocesan UTO coordinator (tsmecker@cox.net), is willing to assist any congregation with start-up, she said.

Secretary of Convention Canon Steve Nishibayashi reported that parochial reports are due. “The portal to file the reports with the Church Center is available. The Executive Council and The Episcopal Church have new budgetary processes in preparation for General Convention 2024 and the parochial reports are looked at very carefully and the input received is critical” to the budget process,” he said. Deadline to file is May 1.

McCarthy told council that follow-up will begin in January on the five resolutions approved by convention, regarding:

McCarthy reported that repair work continues after the Nov. 8 flooding of St. Paul’s Commons, caused by a broken water pipe. She also said she will officiate soon at two separate weddings of former youth group members from her time as vicar of Church of the Epiphany, Oak Park. “It’s fun to see these kids grown up and to see what impact the church has had on their lives,” she said.

Marc Weniger said Corporation of the Diocese directors also discussed, among other matters, at their Oct. 18, 2022, meeting, the unpaid MSF contributions; the use of $305,000 from the sale of nonsacred real estate to cover capital campaign costs; and a capital campaign report; and that $200,000 has been raised in 2022 for the annual appeal.

Taylor also paid tribute to outgoing council members: the Very Rev. Jeannie Martz, who retires at the end of the year as rector of Trinity, Orange, and as dean of Deanery 9; and the Very Rev. Christopher Montella, newly appointed dean of Deanery 2, whose term is ending and who will be succeeded by the Rev. Courtney Tan.

Diocesan Council meets next at 4 p.m. Thursday, Jan. 12 via Zoom.